Released twenty-six years after the original Game Boy game and twenty-one after the Game Boy Color update, the 2019 remake of Link's Awakening brings it to a new generation with updated visuals, controls and some token new content (and Amiibo support for more of the same).  But does this remake prove worthy for long-time Zelda fans and relative newcomers alike, or is it just one to skip? 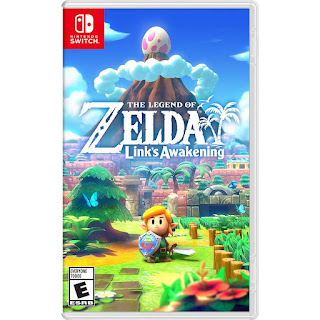 I was more than a little surprised when a remake of Link's Awakening was announced for the Switch.  Being a big fan of the original (it being the first Zelda game I ever owned, and I still have that very same copy to this day) and it also being regarded as one of the best Game Boy games and Zelda games of all time, it seemed like the epitome of an unnecessary thing for Nintendo to do.  But of course, being a dedicated follower of the series, I went and picked it up on launch day to see how the game ultimately came out.

Thankfully, the game did still make a good impression on me, even at first glance.  The visual style has naturally been updated to take advantage of the Switch's 3D capabilities, and it honestly looks very nice - the colors are bright and vibrant, and despite the dimensional shift, the characters, environmental objects and overall style are surprisingly faithful to the simplistic but charming Game Boy style.  Cel-shading is surprisingly not utilized, but the characters do still move in an exaggerated, stretch-and-squash cartoon style that translates over surprisingly well from 2D sprites and perfectly suits the more humorous tone of the game.

The remake does take advantage of the more powerful hardware in other ways too.  The game is no longer broken up into distinct "screens" with a pause and manual scroll between them, though oddly the game still treats it as such - enemies will not follow Link beyond the area in which they spawn, and bushes, trees and holes will reset once Link ventures far enough from them (generally just enough to scroll them out of the camera's view).  Having more buttons available does significantly streamline the gameplay, with the sword and shield being available at all times (via the B and R buttons respectively) and being able to equip two other buttons to the X and Y buttons to use as needed.  Additionally, once once gets the Power Bracelet, one can just press A to lift and throw items without needing to equip it, and the Pegasus Boots are always mapped to L, resulting in a lot less inventory management on the whole.  The map screen comes with a few new features too, allowing the player to mark specific places so that they can more easily remember to come back later when they have the proper item to solve a puzzle, automatically tracks seashells and heart pieces that the player has collected, and even snippets of dialog can be replayed to remind them of their current objective.  And of course, for those seeking a greater challenge, the modern Zelda trope of "Hero Mode", causing Link to take double damage and enemies to no longer drop hearts, is available right from the start.

I was also quite surprised at how much remains similar to the original game - not just in terms of visual design, but in the behavior of enemies and mechanics.  A few do have subtle differences (blocking enemies swords will knock them back and stun them a moment for an easier hit) and some of the bosses have been reworked to be more challenging, but for the most part they're very faithful to their Game Boy counterparts.  The overall layout of the map and dungeons are very similar, though with enough subtle differences to keep long-time players invested, and when things do change, they make sense and work to the game's benefit rather than against it.  There are many more secret seashells to find (and associated rewards for doing so), rupees now drop from enemies in multiple denominations, and there are a few more hidden teleportation spots to discover now, making travel to far stretches of the map considerably more efficient.  Acorns of Defense and Pieces of Power still spawn under the same conditions, but are somewhat toned down in effectiveness, lasting about 30 seconds rather than vanishing after the player takes more than a few hits.

The side-quests of the original Link's Awakening have seen substantial upgrades too.  The fishing and crane games have been substantially reworked to have more depth and provide more rewards, and the color dungeon does make a return as well, letting the player get a significant boost to their attack or defense (but not both), and they even went to the trouble of integrating its visual style better into the overall aesthetic.  But the main draw is a new minigame led by Dampe the gravekeeper (first seen in Ocarina of Time), where one builds their own custom dungeons out of parts that are found, purchased, won in other minigames or just earned by completing pre-made dungeons in the game.  This lets you earn a bit of extra reward by completing pre-made challenges, or just save your own custom-built dungeons to Amiibos to challenge your friends with later.  And while it's ultimately not a huge addition to the experience, it does add a bit more longevity and replay value to the game.  It does effectively add a bit more purpose to the in-game shop too, as some dungeon tiles can only be found there by shelling out a significant amount of cash.

I do have some small nitpicks, though.  First being that the game controls much the same as its Game Boy counterpart with eight-directional movement, yet does not support the D-pad - only the analog stick.  I personally didn't have any issue with this, but I can see why some wouldn't like it.  More pressingly, though, the game does have a somewhat inconsistent framerate, with more busy areas of the map causing frame drops as the player moves through them.  Both of these may be addressed through later patches, though it is a bit strange to see them in a first-party Nintendo game, let alone a Zelda title.

But while I was skeptical at first, and personally I would have preferred to see one of my least-favorite Zelda games be remade instead - possibly the Oracle games or even the DS games - the 2019 Link's Awakening proved to be a worthy undertaking.  It keeps the original's design and charm largely intact while adding enough tweaks and side-content in to keep younger and older gamers alike engaged, and it's handled with the same care and attention Nintendo always gives to their beloved franchises.  Ultimately it's far from the most necessary of remakes, but I am glad to say it does the original game's legacy justice.  And hey, maybe we'll see a few of the underdog Zelda games get attention like this in the future if this remake proves to be a hit. 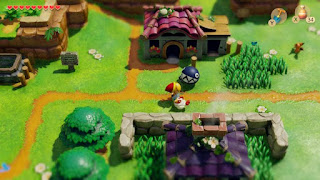 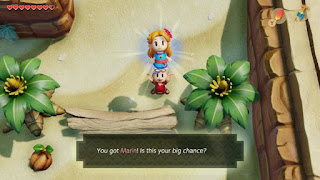