The latest in the long-running Fire Emblem franchise and the first mainline entry to make its appearance on the Switch, Three Houses also introduces several new gameplay elements to the format.  But do these changes make the sixteenth Fire Emblem game a strategy RPG to remember, or is this just a letdown to long-time fans? 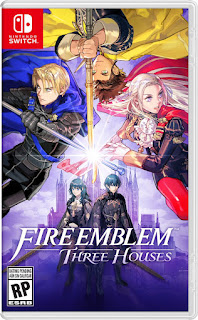 Fire Emblem for a franchise has been around for a long time, with its first entry appearing on the Famicom in 1990, but it remained a relatively unknown franchise outside of Japan for a long while.  Like many in the west, my first exposure to the Fire Emblem franchise was through the Super Smash Brothers series, most notably its second entry (Melee) which featured Marth and Roy from the first and sixth Fire Emblem games, respectively.  Fan interest led Intelligent Systems to localize Fire Emblem games for the first time, and from that, the series quickly developed a following in the west.  Sales for later entries steadily declined, though, and the series faced the threat of being cancelled entirely.  However, the unexpected success of Fire Emblem: Awakening on the 3DS (selling 2.1 million copies worldwide - nearly four times as many as the previous international release) brought it back from the brink, driving Nintendo to give the franchise a new lease and allowing Intelligent Systems an opportunity to make it a staple franchise for a new generation of RPG fans.

The most recent result of that and a collaboration with Koei Tecmo (who also developed the Fire Emblem Warriors spinoff game) was Three Houses; a game which worked in some elements of a school sim (not unlike the popular Persona franchise) and allowed the player to build more personal relationships with characters in a variety of ways.  The game also surprisingly did away with a couple of the series' trademark elements - the Weapon Triangle and Magic Triangle mechanics are discarded, allowing for a wider variety of spells and weapons to be utilized.  Similarly, Magic now falls under one of two schools, with healing and supportive magic governed by the Faith stat and offensive magic being based on Reason.

While Three Houses does retain the series' trademark of having no "generic" characters, it does utilize a class system somewhat similar to games like Final Fantasy Tactics.  Each character begins as a generic class (Noble or Commoner) that can use low level magic and weapons, but as their skills with weapon types, Reason, Faith, Riding, etc. are boosted, more classes become available to them.  From Monks (spellcasters) to Fortress Knights (slow but heavily-armored and powerful fighters) to series mainstays like Paladins and Pegasus Knights, there are quite a few to see and use, each with their own skills to learn to bolster one's combat abilities.  One small roadblock, however, is that one requires a Seal item to unlock anything beyond basic classes, and they must take an exam at a specific point of the week with a significant chance of failure, though this decreases as the classes' prerequisite skills go up.

A new feature of Three Houses is the Battalion mechanic, where a character can be "equipped" with a type of Battalion; doing so bolsters their stats based on the character's Charm stat and and allows for special attacks called "Gambits" with a variety of effects - healing all allies in a small area, stunning enemies and preventing them from moving for a turn, or knocking them back a space to allow other units to move in, to name a few.  More powerful Battalions become available to units with a higher Authority skill, making it a very worthwhile investment for some characters.

As mentioned, the game works in elements of school sims to develop its characters and train their abilities.  In a twist on the norm, though, the player actually takes the role of a professor at Garreg Mach Monastery, granting them a very active role in shaping their unit's classes and abilities.  The player is at first given the choice of which of the titular Three Houses to teach for (each with their own set of students and a unique storyline twist later on), and after that they can hold lessons to train students' stats, have them enter tournaments, take promotion exams, or just invite them to mundane activities like cooking or having tea together.  The latter two are necessary in part to keep students' Motivation up, which is required to maximize the number of training sessions they will have in a given week.  One can also help them build bonds with the player character and other students via correct dialog choices, gifts or finding and returning lost items, which in turn helps them synergize better on the battlefield.  One can also recruit students from other houses into their own by boosting the protagonist's stats high enough, which gives them more available characters to use during battles.  As one engages with their students and completes optional objectives throughout the academy, they will earn experience to boost their Professor Level, which in turn will earn them extra funds at the start of each month and more free time to spend on activities.

Combat, despite losing a couple of long-time staples of its design, remains unmistakably Fire Emblem, with lengthy but engaging skirmishes against large groups of foes and just enough of a random element to keep the player focused.  Keeping one's team in a close formation and moving characters to the back of the pack after they take a hit or two is still recommended, lest enemies gang up on individual units and eliminate them (particularly problematic on the Classic setting, where character death is permanent).  Weapons still break after a set number of uses, with special attacks generally doing more damage than a standard blow but depleting Weapon HP much more quickly (and eliminating any chance of follow-up attacks).  Spells operate slightly differently than previous games, not being tied to Spellbook items but only being usable a set number of times per battle.  And of course, knowing the ins and outs of all the units is highly recommended, such as attacking armoed foes with magic or knowing to use archers against flying units.

As with many modern games, Three Houses does work in an online feature of sorts - while the game is solely a single-player experience, connecting to the Internet will cause "event squares" to appear on the field where other players' characters fell, usually granting a dropped item or some extra experience points when a character stops on them.  One can also get training or temporary assistance from other players' characters at the academy that appear after talking to a specific NPC.  While neither is ultimately a big change to the overall experience, they can be handy for getting a little bit of extra aid in a pinch.
It's not a perfect experience, though.  I greatly enjoyed the first half of the game; the story-based sidequests, character building and customization were all a lot of fun, offsetting the series' relatively shallow tactical combat that kept me from getting much into it beforehand.  However, the experience is not nearly as strong in its second half.   The story abruptly shifts ahead five years, which changes up surprisingly little - you're still doing the same school-life elements between major battles, only now there's far less to do in the way of subquests, so you just end up spinning your wheels or doing tedious grindfest skirmishes to pass the time rather than anything engaging.  Combat becomes far less balanced, with your units either becoming virtually-invincible juggernauts who kill everything in one hit or die in one hit themselves (particularly archers and mages), and frequent fights against multi-health-barred monsters just become a slog when you have to take out half a dozen of them back to back in a single battle.  The story all but hits a dead-point, with lots of overlong filler missions that serve little purpose narratively, and on one particular path the secondary protagonist just becomes insufferable, constantly brooding and spouting cringe-worth edgy lines you'd see in a thirteen-year-old's crack at death metal lyrics.  Most of the characters scarcely even acknowledge the time skip - sure, they get new designs (well, most of them), but they barely have a word to say in most cutscenes and their interpersonal interactions pick up exactly where they left off five years prior, as if that game-changing story event never even happened at all.  Even the ending is pretty weak - the cutscene barely lasts a minute and has maybe three spoken lines in it, with all the characters' subplots given resolution in dry text blurbs rather than animated cutscenes.  It's like they had a really good game premised planned out and then were forced to horribly rush-job the latter half of it.  Still a good game overall, but I wish its second half didn't feel so rushed.

All in all, Fire Emblem: Three Houses had me entranced for its first half - the Persona-esque character interactions, the customization and even the school sim elements were all pretty charming and a nice change of pace for the series, and even the combat - something that mostly turned me off to earlier entries - really wasn't too bad for the most part, if still not especially deep.  However, the latter half of the game felt quite weak by comparison, discarding much the wonderful character interactions and school-sim element and making the whole thing into a desolate, unpleasant and virtually plotless grinding simulator.  If it held up the same standard of quality I'd heartily recommend it as a fantastic original RPG on the Switch, but as it stands, it's one I'd still recommend, but with some forewarning that its latter half isn't nearly as enjoyable as its first. 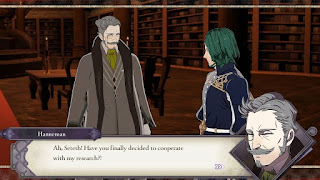 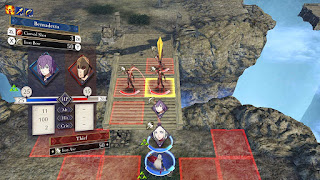