I'm trying something a bit different for this week's entry.  Since all three games in the Legacy of Goku trilogy play similarly and are based on the continuing storyline of the same franchise, I'll be covering all of them with one review.  So, is this RPG adaptation of a beloved anime franchise worth a look, or is the Legacy of Goku one that should just be forgotten? 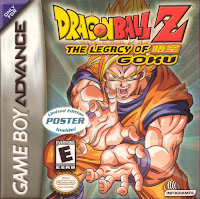 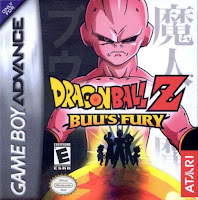 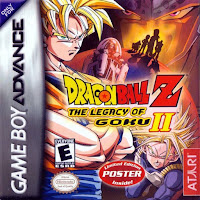 I'm sure the Dragon Ball franchise is one that needs no introduction.  If you have even a passing interest in anime you've probably at least seen it in action and have an idea of what it's all about; over-the-top combat and fantastic magical elements mesh in a franchise of pure imagination.  Naturally, that and its evergreen popularity have led to countless video game adaptations over the years spanning all number of genres; from fighting games to platformers to card-based RPGs to beat-em-ups, Dragon Ball is as much a presence in the world of gaming as it is in the world of anime and manga.

I've personally never been a huge fan of the series, but I did watch quite a bit of it back in the early 2000s on Cartoon Network's Toonami block and am fairly familiar with the storyline thereof.  However, being a fan of RPGs and hearing that Dragon Ball Z's storyline got a trilogy of such adaptations on the Game Boy Advance, I was naturally curious to see how they turned out.

Well, in the first game's case, I can say it definitely did not turn out very well.  Sure, the basic storyline of the series is laid out early on, but you're quickly waylaid by a long trek through the woods where even crabs and wolves can deplete Goku's health and kill him in a matter of seconds.  Not aiding this fact is the extremely awkward hit detection on Goku's punches, requiring you to stand slightly below the enemy you intend to hit so that his fist lines up with the enemy's sprite, and even then they're almost certain to hit you before his arm is fully extended.  Stranger still, Goku's signature special attack (the Kamehameha) is virtually useless, with even a fully-charged strike not being able to put down anything but the weakest enemies.  Goku has an extremely limited flight mechanic to cross over some obstacles, with emphasis on "extreme" - you get barely a second of flight at the start of the game and, until you pick up an icon, you can't fly any further.  Only by leveling up can you get more flight time, and even then, it's really not very much.

Combat in the game - the central focus of Dragon Ball Z - is a frustrating chore, and without that the whole experience quickly falls apart.  Moreso when there are long breaks between story beats that force the player to complete a number of menial, non-optional sub-quests (retrieving eggs, building bridges out of rocks, rescuing cats, and so forth).  Completing these does reward the player with experience points to let them gain a few levels, at least, but even then I still had to take my chances quite a bit with enemies.  This, plus the extremely limited amount of healing items you're provided, makes it seem as if he only way to progress is to utilize an exploit - when one saves the game and reloads, they will be put back at the start of the current screen, with full health and any experience they'd gained.  I ended up doing that for nearly an hour until I could defeat the wolves in one hit before I had any luck making progress through the story, then repeating the process each time I made it to a new area with a different set of enemies.  Boss fights are equally arduous, mostly just consisting of throwing a punch or two, running away, and burning through healing items to outlast them rather than employing any actual gaming skills.  Basically, Legacy of Goku is a slog and completely squanders the best elements of the series it's based on.

So with all of that in mind, I didn't really bother finishing the first game.  I can say, however, that Legacy of Goku 2 is a vast improvement over its predecessor in every way.  This is even evident right away with the introductory cinematic, which is much more clean and less compressed-looking than the first game's intro.  Even the first few minutes of gameplay show vast improvement, with your character's attacks having more range (and a bit of a wide arc to them a la Link's sword in the Zelda games), making hitting enemies much less of a problem.  Enemies do significantly less damage per hit and defeating them (as well as breaking open rocks) frequently drop power-ups to restore a bit of health, reducing one's reliance on save-scumming and limited inventory items.  Ki blasts are now much more useful, though to compensate the ki bar does not regenerate over time like the first game's, requiring the player to collect power-ups from enemies and rocks to refill it. And of course, many of the characters now have the ability to turn into a Super Saiyan, boosting their stats dramatically but causing their ki bar to rapidly deplete (and reverting once it's completely emptied).

The game does still require a fair amount of grinding, though because of the above factors, it's now far less of a chore to carry out.  Less so as enemies generally give far more experience points and there is even an experience meter on the HUD that shows how close your character is to leveling up, ensuring that you don't have to constantly check the pause menu for that information.  The game even provides a plausible, in-universe explanation for why you have to fight mundane animals in some areas, which I thought was a very nice touch.

The game does have a distinctly more "RPG-like" feel in some of its elements too, with the most prominent one being that you can actually see your character's stat loadout on the pause screen, visibly gain more stats with levels, and can find items throughout the world to boost stats by a point or two.  While the storyline is still a linear one, the player is afforded a bit of free-roaming exploration via a Mode-7 world map reminiscent of 16-bit RPGs like Final Fantasy 6.  Finally, instead of being able to save at any time via the menu, there are now pre-determined save points throughout the world, requiring the player to be a bit more cautious when in an unfamiliar area.

Despite the title of the game, Goku is not actually playable for a good chunk of it, instead focusing primarily on the other protagonists of the series.  However, you do unlock numerous playable characters as you progress through the story, each with subtle differences in their attacks, stats and specials.  There is even a bit of a Metroid-esque element worked in in the form of various gates one finds, with each requiring a specific character to be at a specific level or higher to open them, which encourages exploration and experimentation with all of the characters one has at their disposal.

Legacy of Goku's third entry, Buu's Fury, confusingly dropped the subtitle but retains all of the hallmarks of the first two games.  However, even more RPG elements are now fit into the formula.  This is most evident in the fact that one can now find "armor", fitting into head, hands, feet and accessory slots.  Generally these are straightforward stat boosts, though others may have secondary effects (like the Weighted Clothing, which lowers your stats but causes you to gain more experience from defeated enemies).  Likewise, items play a more prominent role in the gameplay too, with enemies frequently dropping food items one can pick up and use later to restore health.  Money is finally incorporated into the gameplay as well, allowing the player to purchase food and equipment at shops for later use, though I rarely had to use this seeing as drops from enemies and containers are pretty generous.

Buu's Fury also has two two more nice touches that the previous games lacked.  One is now afforded a degree of character customization; when a level is gained, the player is given three points to distribute among that character's stats however they wish, and if you're undecided, you can stockpile them and allocate them later.  One can also manually recharge their character's ki meter with a special command, though as their character is left stationary and unable to fight back while doing so, it's a bit impractical to do mid-fight.  Still, it's a nice nod to the series.

In short, the first Legacy of Goku game is a lackluster effort, using a license to try and pass off a shallow and clunky game.  However, its developers clearly had passion for the franchise within them, which showed through much more in the sequels; much more polished, longer games that provided a fair challenge and quite a lot of content in between the familiar story beats.  If you're a fan of the series and want a couple of basic, but enjoyable action-RPG titles, definitely check out Legacy of Goku 2 and Buu's Fury. 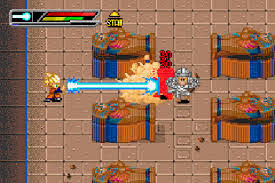 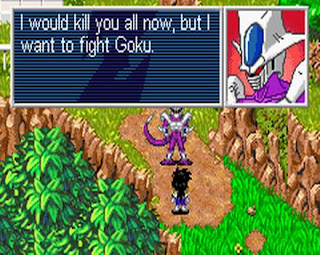