The followup to Quintet's 1991 hit Actraiser and the first in a loose trilogy of similarly-themed action RPGs for the SNES, Soul Blazer was a modest success that has since developed a fan following.  But does it hold up as well as its brothers, or is this just the forgotten first in line? 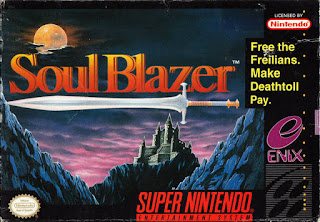 Soul Blazer  came out on the heels of two highly-acclaimed games - Legend of Zelda: Link to the Past, and its own predecessor Actraiser, so it had quite a tough act to follow.  Particularly as it borrowed elements of both - the top-down perspective of Zelda (with a few more RPG elements worked in) and several thematic similarities to Actraiser, so it was only inevitable that there would be unfavorable comparisons between the games.

But while it may not be the most fondly remembered of Quintet's library, one can't say it doesn't try to be a good game in its own right.  SoulBlazer certainly shows a lot of elements that would become Quintet hallmarks, most prominently in its dark mood.  The player is put in the role of an angelic character, tasked with rejuvenating a destroyed world and banishing the evil that caused it.  Between this, he visits towns and speaks with people there, and can revisit a "home base" of sorts to regenerate HP and save his progress.

The action in Soul Blazer largely takes place from a top-down perspective, though rather than having a focus on puzzles, Soul Blazer is more focused on action, having the player traverse levels, avoid traps and clear out "monster lairs" one-by-one, gaining experience for kills and uncovering treasures for destorying layers, before eventually confronting a level boss.  It's actually a bit reminiscent of Gauntlet in that regard.  The developers also went out of their way to ensure that focus stayed on player skill rather than simple stat-grinding - the amount of points one can earn in any given area is usually finite, so the only way to overcome the bosses is to memorize their patterns and counter accordingly.

The game does work in a few other RPG elements too, with the most prominent example being the equipment one finds throughout the adventure; usually as a reward for clearing certain monster lairs or viewing certain milestone events in towns.  In addition to the typical boost in one's defense stat, armors often have a secondary effect - the Ice armor, for example, makes one immune to damage from fiery floors, while the Bubble armor makes the player able to enter underwater areas.  Often these are just specific to one stage, but a few others have added benefits later on - the Magic armor halves the cost of magic, while the Light armor makes the player immune to attacks from weaker enemies, for example.

Weapons follow a similar trend, with some being required to defeat a particular type of enemy and others proving useful in different ways later in the game as well.  For example, the Psycho sword can stun metal creatures, the Zantetsu sword can outright kill them, and the Critical Sword, while one of the weaker weapons, has a small chance to instantly kill any enemy it hits (sans bosses, of course). Arguably the most useful one, though, is the Recovery Sword, which is not only powerful, but causes the player to regenerate some health when an enemy is defeated with it.

Magic is an interesting element in the game too.  While the player doesn't get an MP bar per se, these attacks are instead performed by spending Gems (a name which initially led me to believe there was a shop system, but no such thing exists in-game).  They are awkward to use, though, as all of them originate not directly from the player, but from the "soul" that steadily orbits around him throughout the game, making them somewhat difficult to aim.  There is a surprising variety of effects (launching a fireball straight ahead, arrows in four directions, leaving a ring of energy that damages enemies on contact, and so forth), though I generally found it more convenient and practical to just kill enemies with my sword instead.

Soul Blazer also definitely isn't Quintet's finest game in its aesthetic design, with graphics that are decent but lack the clean, chibi-fied style of Zelda or the intricate detail of some of their later games like Terranigma; nothing about them is bad, but not a lot stands out either (the highlight easily being some of the more grotesque boss designs).  Similarly, the soundtrack isn't as memorable or epic as Quintet's other SNES games; Yukihide Takekawa went for more of an upbeat rock soundtrack that sounds distinctly more like "video game level" music than most of Quintet's library.  It still does a good job setting the mood for the environments and giving the action some punch, but it's a very different feel from the more moody scores of Actraiser, Terranigma and Illusion of Gaia.

And I think that also works to explain Soul Blazer as a whole.  It lives in the shadow of games that came before it and is even more overshadowed by Quintet's own pseudo-sequels that came later.  But those who give it a chance will find that it's a pretty interesting game in its own right; sort of an experimental outing that allowed Quintet to get their footing and make more ambitious and polished action-driven games in the future.  Definitely worth a look on its own merit too, especially for some of its interesting story elements and challenging battles. 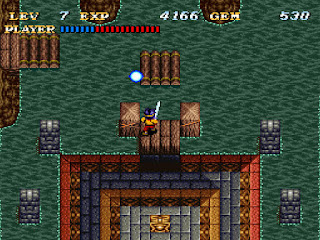 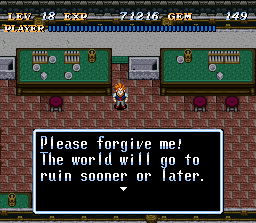