A game largely overlooked in its day that built up a cult following in later years, River City Ransom was a blend of a side-scrolling beat-em-up and RPG-styled shops and character customization.  But is this trendsetter still worth a look today, or are there just too many better examples of this blend of genres available now? 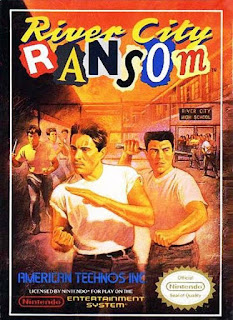 Technos may be a long-defunct company, but they left quite a legacy behind.  Known primarily for beat-em-ups (most prominently the Kunio and Double Dragon franchises) and a series of sports games where brutally assaulting other players is both allowed and encouraged, they built up quite a following during their prime years in the 80s and 90s.  Perhaps because of that, their franchises have lived on, with Double Dragon and Kunio seeing rereleases, remakes and sequels across numerous platforms, companies and genres to this day.

The latter franchise is probably best-known for Downtown Nekketsu Monogatari, whose westernized release, River City Ransom, is a cult classic in its own right.  In no small part because of its absurd sense of humor (the ending in particular being an iconic piece of NES cheese), but for its strong gameplay that combined RPG elements with those of a side-scrolling beat-em-up.

To that end, the game is a non-linear experience, with the player allowed to freely roam the game's environments, picking up all number of weapons they find along the way - tires, pipes, chains, boxes and so forth - and defeating enemies to earn money and buying items at shops to earn new moves and upgrade character stats.  There are a lot of them, too - from cafes to donut shops to fast food joints to sushi bars, every item within offers different prices and benefits, giving the player a lot of options to experiment with (rivaled in its time perhaps only by Earthbound, released a few years later).  Some can only be eaten there at the restaurant while others can be carried with the player and used whenever they wish, which can grant them a quick energy boost in a pinch.

One can also visit bookstores, which allow the player to purchase books that, for the cost of a slot in their inventory, will permanently grant a new move in their arsenal.  Stone Hands makes one's punch into a rapid-fire triple punch, Dragon Feet does likewise for kicks, and Acro Circus turns one's jump into a damaging somersault to name just a few of these.  These do vary wildly in usefulness, with some being comically overpowered and others being virtually worthless, but nevertheless they add some more variety and strategy to the game.  Some also require quite a lengthy time investment to afford too, with prices stretching into the hundreds of dollars, so it's a bit more longevity for the game.

The game has a bit of an unusual health system to reflect its RPG element, too.  Stamina represents one's current health, which can be restored by food items, Max Power can be upgraded and grants more stamina, but alongside these exists a third stat - Willpower.  The higher this is, the better the chance one has to get back up after having their Stamina depleted, losing some of their Willpower stat in exchange for one or two bars of health back.  It can potentially save you from dying and losing half your money at times, but of course the better option is probably to carry a couple of spare food items to prevent your health from getting to that point in the first place.

Of course, no beat-em-up is complete without a co-op mode, and River City Ransom certainly doesn't disappoint there.  The second player can join in as Ryan and build up their own stats and money alongside player 1.  However, this seems to have been something of an afterthought on the developers' part, as having a second player join in causes the game to become extremely laggy and slow to a crawl, particularly in larger maps where enemies tend to spawn in greater numbers.  It may also make the game just a bit too easy, as almost every boss in the game faces you solo, which can make it easy for a two-player team to gang up on them and combo them into oblivion without them even being able to get an attack in.

Being a game with hefty RPG elements, RCR does employ a save system, though it's one of the most convoluted and bizarre I've ever seen in a video game.  Rather than utilizing a battery back-up, the game utilizes 30-digit passwords per character that run the full gamut of upper and lower case letters, numbers, punctuation and even apostrophes over letters, making them quite a chore to write down and re-enter.  Even more bafflingly, leaving the password screen and re-entering it only a moment later will generate an entirely new password, so I have no idea how the game even generates or stores data within them.

Still, it's not hard to see why River City Ransom built up the following it did.  RPG fans had much to enjoy with a game that let them build up and customize their characters however they wished, while fans of beat-em-ups saw a solidly-built, entertaining game that provided plenty of hard-hitting action.  It may not be the finest example of either genre, but it's one of the best the NES had to offer, and the fact that it's spawned a continuity in its own right (with nearly all localized Kunio games utilizing the sillier Western version of the story and characters rather than the original) speaks to its following.  Definitely worth at least a look. 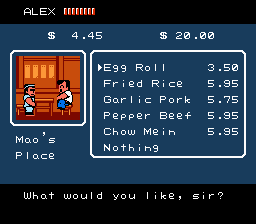 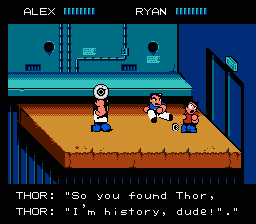 Developer: Technos, KID, Million
Publisher: Technos, Sharp, Naxat Soft, Arc System Works, Atlus, Infogrames, 505 Games
Platform: NES, Sharp X68000, PC Engine Super CDRom2, Game Boy Advance
Released: 1990 1993, 2004
Recommended Version: Of the 90s releases the Super CDRom2 version is definitely the most impressive, with completely redrawn graphics and a CD soundtrack, though it is only available in Japanese.  The Game Boy Advance version of the game, River City Ransom EX, is a remake with retooled gameplay, new moves and AI-controlled teammates but sadly no co-op feature of any kind (save for importing your character into another player's game to work as an AI partner).  If you don't mind that, though, it may just be the definitive edition.  But if you want the original experience with some of the technical limitations of the NES version (sprite flickering and massive slowdown in two-player mode) removed, grab the "Kunio and Double Dragon Retro Brawler Bundle" on modern platforms.
Labels: ⭐⭐⭐½, 👑, 1990, Full Reviews
Newer Post Older Post Home