Transistor is the second outing from Supergiant games, an indie company that made their name with the action dungeon crawler Bastion, a game noted for its atmosphere and dynamic narration.  But does Transistor prove to be a worthy followup to their first hit, or is this cyberpunk RPG just one to be left behind? 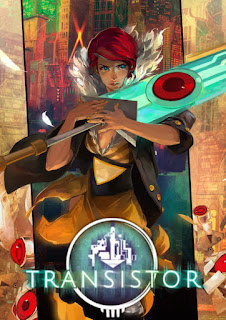 Supergiant Games has become a bit of a fan favorite among fans of indie games for their distinct style, with storytelling that's often left vague and open to interpretation, but nevertheless kept engaging by having a narrator tell the story, reacting in real-time to decisions the player makes while playing.  This lent a unique edge to their first major release, Bastion, and gets carried over into Transistor, which is a very different style of game in terms of gameplay but is undeniably built on the same paradigm.

Indeed, Transistor couldn't be more different in terms of setting, taking place in a futuristic city rather than a fantasy world.  Things start off even more vague, with the protagonist (Red) seeing someone impaled on a strange weapon, and in the next scene, controls her as she flees from an unseen attacker, said weapon in hand.  This weapon turns out to be sentient and speaks to her throughout the game, offering commentary on events and reminiscing about their past together, hinting that the personality within the weapon is someone she knows, but little else is elaborated on until much later in the game's runtime. Things get stranger still when it's revealed this weapon has the ability to absorb the recently deceased, apparently preserving their consciousness within some kind of virtual world, while also granting them new special moves and profiles on the movers behind the game's events.

Combat in the game is a unique take, too.  While the game is mostly set in real-time, combat offers the player the ability to use "Turn()" to pause the action and plan out several moves in advance, shown at the top of the screen on a time bar.  Movement and actions alike deplete this bar, but once one plans out their moves, they will activate them in quick succession, moving at much greater speed than their enemies, slightly similar to the VATS system from the newer Fallout games.   This proves extremely useful throughout the game, as many foes move faster than Red and cover in fights is often sparse, meaning one's only option to avoid damage in many cases is to spend Turn() wisely.

Some more twists emerge in battles too.  Attacking enemies from behind or while invisible grants a 1.5x "backstab" bonus multiplier, which does prove very useful, especially with programs like "Jaunt" (which lets you quickly zip around the field) and Mask (temporary invisibility) can also grant the player a tactical advantage.  Enemies are also not simply removed from play once defeated; instead, they spawn "Cells" which must be collected within a few seconds after dropping, or the enemies will respawn and fight anew.  Weaker enemies generally only drop one or two, while larger foes can drop many; thankfully, each missed one won't spawn a larger-scale enemy, but instead just turn into "Bad Cells" - weak but annoying foes.

Health is somewhat oddly handled, too.  While you have a health bar, it being depleted is not immediate death - instead, one of your primary Functions will be broken, robbing you of some of yoru combat options until you visit "Access Points" to repair them, with more powerful ones requiring more unique Access Point visits to fully repair.  However, if at any point you have all four slots empty or broken, you will die and be sent back to the last checkpoint.

Functions are a unique mechanic in their own right.  As mentioned, they serve as your attacks in combat, but they have several other uses as well.  Each of your four function slots has a secondary slot (with a second for each being unlockable over the course of the game), and equipping a function there will grant some properties of that function to the primary one.  For example, equipping Crash in the secondary slot of Breach (a piercing attack) will cause the attack to stun and inflict additional damage over time to anything it hits.  Equipping Mask onto Jaunt will make the player briefly invisible after a dash, while equipping Ping (a weak but quick and Turn-efficient attack) to most any action will reduce the amount of Turn() bar it requires to execute.  Each function also can be equipped in one of four Passive slots to grant the player small bonuses, such as spawning copies to distract enemies after sustaining damage, bolstering the amount of Turn() bar they have, dealing extra damage with all Fuctions, or simply taking reduced damage from all sources.  Each Function takes a certain amount of "Mem" to equip, which the player has a limited supply of but which, like most things, can be improved by leveling up.  This system is highly versatile and allows for many different possible combinations of player loadouts and Function setups, encouraging experimentation to see exactly which combinations will prove the most useful against a given challenge.

Another odd turn for this system is the fact that Functions actually provide a large amount of the game's backstory, unlocking profiles for major players in the plot as they get used.  However, one must use each function in each of the three slot types - active, secondary and passive - in at least one battle each to fully unlock a character's profile, which is a subtle but creative way of encouraging more experimentation on the player's part.

Going even further with this theme, leveling up grants the player Limiters.  These are optional disadvantages one can enable during combat to make their enemies more dangerous, but also grant them greater experience rewards should they successfully win a battle.  These can range from doubling enemy damage output to reducing the amount of available Mem for Functions to giving Cells shorter respawn times to doubling the number of Cells that enemies drop, with each granting a varying experience bonus.  Multiple Limiters can also be stacked, furthering rewards but making things substantially harder for the player.  Moreover, each Limiter also unlocks profiles and tips about the various enemy types, adding a further layer to the game's lore and encouraging the risk-versus-reward element in a clever way.

Supergiant is a company known for their beautiful hand-painted visuals, and Transistor certainly doesn't disappoint there.  Transistor's city is a gorgeous one, with neon lights, statues, structures and decals throughout providing a lot of eye-catching detail, and the animation on Red herself is fluid and graceful, really drawing you in to the energy of the scenario.  Music in the game is mostly low-key but effectively moody, adding to the tense but beautiful atmosphere and providing some genuinely heart-rending moments as the story unfolds.  A surprising amount of it comes with lyrics too, which only draws the player deeper into the world and gets them invested in unraveling the game's mysteries.

In the end, Transistor is another success for the minimalist RPG format, taking a small handful of ideas and using them to their fullest.  Its sparse narrative, revealed only in parts, still manages to be captivating as the player slowly pieces everything together, its characters are relatively few but the ones that are there prove complex and captivating, and its gameplay, while one-note compared to many RPGs, is addictive and enjoyable, letting the player experiment freely with a huge variety of attack types and put their skills to the test via challenges and Limiters that unlock more rewards.  The story itself is rather brief (clocking in at around 10 hours), but Transistor stands as proof that a short, highly-polished amount of content can have so much more to offer than a game that's 100+ hours long just for the sake of being so. 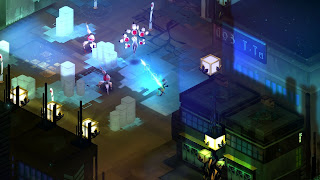 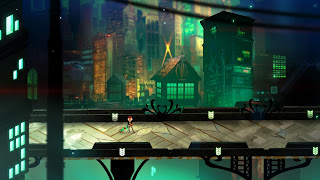