One of the first major releases for the Super Nintendo, Actraiser was one part action, one part god game and one part RPG, putting the player in the shoes of a deity and having them reclaim a broken world from evil.  But does this inventive fusion of genres still hold strong today, or is Actraiser just a game to be cast off and forgotten? 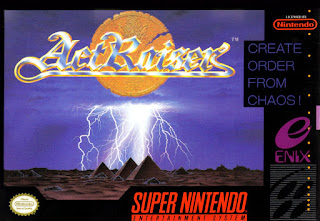 Released only a few months after the Super Nintendo's debut, Actraiser is fondly remembered by many as one of the essential early SNES games.  Not only did it show off the system's capabilities with some amazing graphics, a huge sense of scale with its two distinct gameplay modes and some downright incredible orchestral music (composed by the legendary Yuzo Koshiro, no less), but even the concept was a relatively unique one at the time - sims and god games were starting to gain a foothold on the PC with games like Simcity, SimEarth and Civilization, so seeing one on a console was a pretty fresh experience for many.  Even the box art was eye-catching, showing a massive lightning storm over the pyramids of Egypt with the caption "Create order from chaos!", letting SNES adopters know they were in for something grandiose and epic.

Even with Nintendo of America's censorship policies in place, the scope of the concept wasn't difficult to grasp either.  Playing as "the Master" (God in the Japanese version), the player takes control of an angelic being and does battle with the forces of Tanzra (Satan) across two modes of gameplay.  The first one of these the player sees is the side-scrolling action game element, where the player starts off with a relatively meager health bar and a magic meter with one charge to start (though more can be found in stages).  These segments are relatively simple platforming fare, avoiding traps and dispatching minor foes, each capped off with a boss fight that often requires carefully-placed movement and attack timing to overcome.

That element is serviceable, if slightly clumsy to play and ultimately not much different than what was already seen before in several prominent NES titles.  But between action segments, one is treated to the sim element of the game, and this is what truly makes Actraiser into something special.  There are six locales to visit, each with a temple at its center, and the citizens of each town each face their own hardships that the player will try to help fix.  Most prominent among these are constant sieges from demon lairs - spaces on the map that constantly spawn enemies, which the player must eliminate with the aid of their angel servant until the lair is cleared, lest they destroy crops and houses and terrorize the populace.  Defating enemies also earns the player SP, which allows them to perform other godly feats, detailed below.

Just as important as defeating Tanzra's minions, the land around the cities is often not suited for expansion, with shrubs, deserts, marshlands and other deterrents preventing the city's population and crops from growing.  To combat this, the player utilizes a number of Miracles to clear the way for cities to grow.  Lightning burns away trees and bushes, rain sweeps away sand, and using the power of the sun to melt snow and dry up swamps are among your godly abilities.  One can also summon wind to blow enemies off the map, though this of questionable value as they will gain no SP (required to fuel more Miracles) for doing so.  Finally, one can also summon earthquakes, which devastates all low and mid-level buildings and crops on the map; this doesn't sound especially useful, but doing so does actually come in handy in the later stages of the game, forcing cities comprised of lower-level buildings to rebuild as high-level ones that support more citizens.

The city sim elements in turn help the player during the action segments; as populations grow and thrive, the people will begin to worship the Master more and his power in turn grows, expanding his health bar and total number of spell slots for the action segments and in turn improving his odds at overcoming the enemies within them.  The player will also gain more SP for the city segments, letting them use Miracles more freely and gain access to new ones, steadily allowing them to reclaim land for their citizens and power themselves up further.  A simple, but effective balance between the two major gameplay styles.

Actraiser's concept is certainly an interesting one that melds two gameplay styles in creative fasion, but it's certainly not as deep as one might expect from a game with simulation elements.  There aren't really any Simcity-style random disasters that can cause unexpected harm to cities, for example, nor does one have to micromanage resources like power, water and technology.  In fact, your citizens mostly just work on their own and only rely on you to fend off monsters and take on the occasional obstacle they can't handle themselves (like having to trigger an earthquake to reveal a sunken island).  Still, there is enough to do in these segments that they never get to be too tedious, and one can occasionally find a hidden secret or two by experimenting with their powers (like striking the temple with a lightning bolt, which causes the citizens to relinquish an extra life in fear of your wrath).

Still, the unique fusion of gameplay elements, as well as consistently entertaining design, make Actraiser a compelling experience.  Moreso with its creative (and frequently grotesque) monster designs, polished graphics and, of course, a fantastic Yuzo Koshiro soundtrack that fully took advantage of the SNES's sound hardware, resulting in a game that sounded as close to a real symphony as you could get on a video game console.  There is even a bit of replay value, as completing the game once unlocks "Professional Mode" - a higher difficulty that makes the action segments much more challenging but sadly excludes the sim element entirely.  It's not hard to see why this game is a cult classic for the system, and for fans of Quintet, it's an interesting look at where their forays into the RPG genre began in the 16-bit era.

(Also notable: The game's sequel removes not only the sim element, but the RPG element as well, and revamps the gameplay to be more of a slower-paced action game similar to the Ghosts n' Goblins series.  Still a game worth playing, but a vastly different experience from this one.) 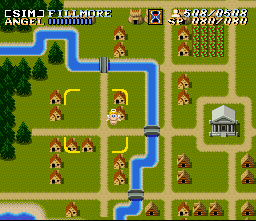 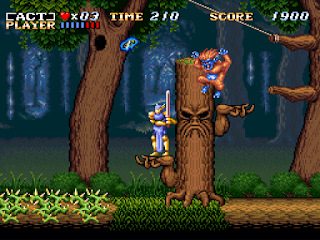