Bloodstained: Ritual of the Night

Announced as a spiritual successor to Castlevania and the "Metroidvania" format in general, Ritual of the Night saw a successful kickstarter campaign and a buggy preview release, followed by WayForward being brought on to lend last-minute quality assurance, before it was finally released in mid-2019.  But was Koji Igarashi's return to a beloved game format a successful one, or is this just another crowd-backed effort to live in infamy along the likes of Mighty No. 9? 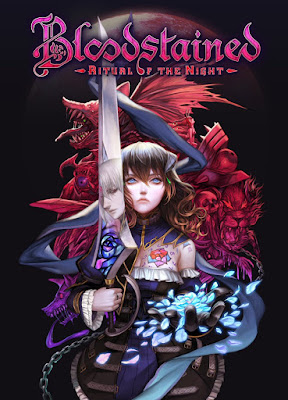 Konami's fall from grace is an infamous event to most every long-time gamer, but with the advent of crowd-funding, having its developers leave to do their own things isn't necessarily a bad thing at all.  But of course, there are always risks involved when it comes to crowd-funding, with too many projects to count either proving to be a letdown or just not being completed at all owing to unrealistic goals and poor management.  Regardless, fan love for the Castlevania series (and disappointment and controversy surrounding Mercurysteam's Lords of Shadow games) pushed many to seek Koji Igarashi's return to the format, resulting in the game getting 5.5 million dollars on Kickstarter and proving just how beloved the series and genre really are.

But despite some initial skepticism (primarily brought on by extended development time, a buggy demo and WayForward being brought on late in development to provide assistance), I'm glad to say that Bloodstained: Ritual of the Night accomplishes what it sets out to do.  While the story obviously no longer involves Dracula or the Belmonts, instead turning to an original plot involving rogue alchemists, the look and feel of Castlevania is very much present in Bloodstained.  ArtPlay has made great effort to carefully re-create the gameplay style of Symphony of the Night, right down to the minute quirks of the mechanics (like the attack-cancel exploit, where one can attack just before touching the ground during a jump, doing so in rapid succession to deal damage faster).  The aesthetics are exceptionally similar too, with hordes of bizarre monsters, gorgeous gothic backdrops and symphonic music lending the game an unsettling, yet captivating atmosphere.  In spite of that, though, the game does retain some of the Castlevania franchise's jokier elements too, with enemies like the spirits of giant cats and dogs, numerous sly references and a number of silly accessories Miriam can equip that often break the fourth wall in clever ways (like the "Concave Glasses" that zoom in the camera or the "Eye of Horus" that pulls it further out).

However, Bloodstained does make effort not to copy its predecessors too closely in order to keep itself distinct.  As in the later games, there are a wide variety of weapon types to equip and use, and each requires subtly different tactics - boots and daggers have a high DPS but require the player to be at extremely close range, making them riskier than most, while spears have long reach but a relatively slow startup and awkward hit-boxes at close range, making them more suited to magic-oriented builds but far from ideal for close combat.  Swords are a good balance between power and range, Katanas have slightly shorter range but hit in a small arc in front of Miriam, and whips are somewhat slow and not the most powerful of weapons but have exceptional range.  Unusually for the series, one can also wield guns, which are very long-ranged and relatively powerful but run off of limited ammunition, making them an option best served for particularly dangerous enemies.  Each weapon type has a number of skills associated with it, whether a powerful combination attack or simply a special move with better range and damage, that can be activated with a small MP cost and by inputting a sequence of inputs, giving skilled players some added options for combat.  One can also, through the use of a particular Skill, unlock slots for up to eight character loadouts and swap between them at any time, allowing for advanced players to quickly alter their strategies on-the-fly and have a move set rivaling those of the Devil May Cry games in complexity.

Bloodstained's Shard system is another source of strategy for the game.  Operating similarly to the Soul-absorbing mechanic from Aria of Sorrow, it allows Miriam to unlock new abilities by defeating enemies, each of which has a small chance to drop a "Shard" for her to absorb.  These come in six forms - Conjure, Manipulative, Directional, Passive, Familiar and Skill.  Conjure and Directional serve primarily as offensive skills, letting the player do things like create pillars of fire to damage enemies or project a stream of acid from one's hand (which can be aimed in any direction via the right thumbstick).  Manipulative abilities grant Miriam the power to transform herself, temporarily buff her stats or summon a particular type of creature to protect her for a short time, Passive shards grant Miriam some kind of passive bonus while equipped (like bolstering her Intelligence stat or getting bonus damage from a particular weapon type).  Familiars summon a companion to assist Miriam, whether attacking enemies or healing her automatically while in need, while Skills grant new abilities that let the player to overcome obstacles and reach new areas - being able to travel underwater, double-jump to reach new heights, or grab and manipulate certain objects, for example.

Of course, no modern RPG is complete without a crafting system of some description, and Bloodstained goes all-in by having not one, but two of them.  One can create almost anything found in the game - weapons, potions, accessories, armor and so forth - by collecting dropped items from enemies or found in chests and bring them back to Johannes, which can save the player quite a bit of money at the in-game shop.  One can even spend collected items to power up some Shard abilities, though this won't get them quite as far as defeating enemies and collecting duplicates of that ability to increase its Rank.  Johannes also provides a food-crafting system, which not only serve to restore Miriam's health when used, but each time a new food is eaten Miriam will gain a permanent boost to her stats, making it a venture well worth pursuing in the long run.  Most anything one can find can be bought at the shop once found too, which can help in some instances to cut down on tedious farming.

Side quests are present in the game too, and mostly fall into mundane territory - finding a certain item for a villager, crafting a particular food item, or defeating a certain number of a type of enemy for rewards.  Bloodstained does make efforts to have them still be worth pursuing, though, with a lot of items that can't be acquired elsewhere being awarded, and even giving player clues as to where to find a particular enemy or needed item (placing a green scroll icon on the mini-map, but leaving vague the conditions needed to get them to appear).  Probably the most fun one is finding books of haircuts for Todd, which allows the player to customize Miriam's appearance with new outfit colors, hairstyles and other options, some of which are clever homages to other games (with the NieR: Automata inspired ones in particular being a favorite of mine).

The game doesn't go off completely without a hitch, though.  I have noted a few bugs in my time playing, with the most common ones being some occasional slowdown and frame-rate drops and enemy item bags frequently becoming stuck in walls, rendering me unable to collect them.  The occasional animation glitch has shown too, with one particular moment of Miriam being stuck in an odd pose for a bit when I collected a shard and got hit at the same time.  And while I have not played it firsthand, these problems are apparently far worse on the Switch port, which also features significant input lag and washed-out visuals.  However, the developers do plan to address this through a series of patches, so these problems may not persist at the time you are reading this.

But all told, while I had some doubts at first, I am glad to report that Bloodstained: Ritual of the Night delivers what it promised, offering an experience very much on the level of quality as any of the well-regarded "Metroidvanias" while providing enough changeups and tweaks to keep itself distinct.  Puzzle-solving and exploration in the game is a joy, the story has quite a few creative twists throughout, and the sheer volume of weapons, skills, shards and side-missions to undertake gives it plenty to experience for casual fans and completionists alike.  Koji Igarashi's plan - to bring himself back to the forefront of gamer consciousness using a gameplay style he played a huge role in popularizing - was very much a success.

(And yes, I fully acknowledge the irony of reviewing this before any of the proper Castlevania games) 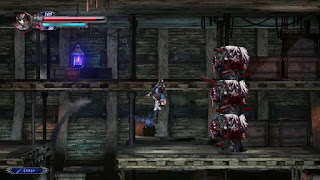 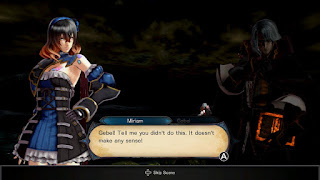 Developer: ArtPlay
Publisher: 505 Games
Platform: Windows, Playstation 4, XBox One, Nintendo Switch
Released: 2019
Recommended Version: I have only played the PS4 version personally, but all versions other than the Switch version (which suffers from a number of issues, mentioned above) seem to be more or less comparable in quality.