An ambitious action-RPG by Warren Spector and arguably the only game from the short-lived studio Ion Storm with any real longevity, Deus Ex is held in high regard among PC gamers as one of the greats.  But is this glimpse into a dark future still worth seeing today, or is Deus Ex another science fiction work that doesn't hold up to scrutiny? 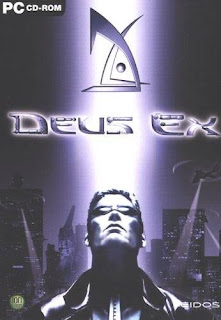 Warren Spector is a name well-known to long time gamers, with nearly everything he's worked on pushing genre boundaries and attempting to create an experience never before seen in the world of gaming.  From Ultima to Wing Commander to Thief to System Shock, all of his games succeed in that to various degress, creating an immersive experience with staggering depth and immersion that even relatively few games today can match.

But even by that already high standard, it takes a lot to get named one of the best games of all time.  Deus Ex certainly made the effort, though.  Built on the groundbreaking Unreal Engine to allow for some truly enormous and realistic environments, Deus Ex also works in numerous RPG elements and multiple ways to complete each objective to create a truly free-form roleplaying experience.  This is evident even in the game's first mission - retaking the Statue of Liberty from a terrorist group that has occupied it.  One can take a stealthy approach to eliminating enemies with silenced weapons, simply march in the front door guns blazing, or traverse almost all combat by finding a hidden back entrance.  Each choice is equally valid, and more surprisingly, one's choices in previous encounters are often referenced in later dialog, letting the player feel like their choices actually have some bearing on events unfolding.

Befitting this, one also has a large variety of skills to interact with the game world.  Boosting weapon proficiency is fairly obvious - giving better accuracy and damage bonuses the more they are raised - but others are a bit more involved.  Hacking skill allows one to bypass password requirements on many consoles and ATMS, giving one extra money and saving some password-hunting.  While one can lockpick/multitool their way through locks and keypads without the skill involved, having levels put into the skill will make doing so much more efficient.  Even the Swimming skill, while very situational, can prove handy at times, letting one take alternate routes into some areas or simply reach secrets hidden deep under the water.  These, plus the fact that one gets bonuses for exploring areas or solving puzzles in unconventional ways, all encourage the player to play Deus Ex as anything but a traditional shooter.

Of course, there are times one will have to fight enemies, even if playing a more peaceable character, and ot that end the game does offer some other options.  One can KO enemies non-lethally (or at least stun them) with things like pepper spray (both canisters and mines), tasers and non-lethal "tranquilizer" crossbow darts, or simply take them out from afar with a sniper rifle.  Robotic enemies are a bit tougher to crack, being all but immune to traditional weaponry, but one also collects weapons like single-use LAW launchers, LAM mines and a GEP gun that fires small explosions, which can also be handy for dealing with stubborn doors.  Almost every weapon one finds can also be upgraded by finding or buying alternate ammo types or "weapon mods" that grant bonuses like added accuracy, bonus damage or a laser sight/scope for more precise aim, which can offset some of the penalties for having a lower skill rating or just let you carry a specific weapon of your choice throughout the whole game.

Adding further to this, one has a wide variety of Augmentations ("Augs") to use to further power up their character and adapt them to whatever playstyle they choose.  Each canister one finds can be applied to a specific part of the body (head, arms, legs, eyes, et cetera) but only one of two choices can be installed on any given location, so the player will often have to make a difficult choice.  The Head upgrade, for instance, can grant "Aggressive Defense" that causes enemy rockets to detonate in mid-air, making encounters with explosive-touting enemies rather hilariously one-sided, or a Spy Drone, which can allow the player to peer around corners and disable electronic devices without exposing themself to harm.  A stealth-oriented player will obviously want to go for the latter, but one versed in combat may wish to go for Aggressive Defense instead.  But regardless of your choices, these prove to be a lot of fun, making you from a relatively average joe at the start into a nearly unstoppable badass cyborg by the end, and are a large factor in the game's overall enjoyment (particularly the Leg upgrades, which let you run at incredible speed and leap over almost any obstacle you may encounter in the game).

Deus Ex's storyline is clearly its greatest respect, though, fully immersing the player in a dystopian future where grand, global conspiracies are very real.  Characters, plot points and scenarios one encounters are surprisingly plausible, and have only grown more relevant and striking as time has gone on.  Even the voice acting in the game is surprisingly good for the time; though there are not a lot of big-name actors in the game, the ones that are there, for the most part, do a surprisingly good job, taking their parts seriously and rarely coming across as hammy.  It also captures something few RPGs even today rarely do well; namely, giving you choices you actually need to put thought into for future events, without any clear-cut answer for which is 'right' or 'wrong.' For example, do you ask someone to act as a spy for you, putting himself at risk but potentially giving you an advantage in future scenarios, or do you have him flee with you, which arguably gives you less personal benefit but assures his safety?  Granted, I wished several of these choices had a bit more consequence, whether good or bad, but it doesn't change the fact that it was pretty awesome to see at the time. I'd also hoped future games would make choices like this feel more substantial rather than less; maybe even lead to totally new story branches or close off future opportunities in a big way.  But alas, very few have.

Being a fan favorite PC game, it is also little surprise that numerous fan patches, updates and conversions have been released over the years; some of which have even surfaced on digital storefronts like Steam.  From mods that allow third-party multiplayer servers to be used to ones that overhaul and rebalance some aspects of the default game (like underpowered weapons and underused skills) to graphical reskins to a bizarre total modification called "The Nameless Mod" that presents two entirely original stories using the engine, Deus Ex, like many well-regarded PC games, is as well known for its fan-generated content as for the core experience.

In short, it's not difficult to see why Deus Ex is so well-regarded among PC gamers and RPG players alike.  It was among the earliest games where one's choices actually had a tangible outcome on the narrative, with character reactions and dialog changing accordingly, and though there is ultimately really one story path to follow, the fact that one's choices are a constant factor in how events unfold never makes it feel like they're being railroaded.  The story is surprisingly credible at its core, with its religious parallels and conspiracy theories expertly woven together to create a vision of a grim but plausible dystopia, and even the protagonists have their morally ambiguous elements about them.  Pair that with a choice of three endings and a significant amount of replayability thanks to mods and multiple-choice design, and you have a defining classic.  There is a good reason that the game is still the focus of a well-known gamer meme: "Every time someone mentions Deus Ex, someone installs Deus Ex."  I know I will be again after penning this review. 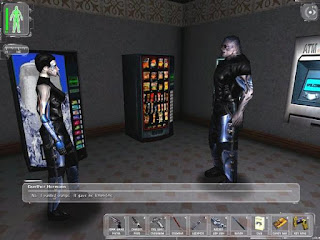 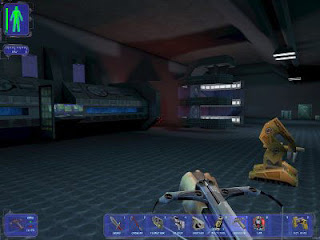 Developer: Ion Storm
Publisher: Eidos Interactive
Platform: Windows, Mac OS, Playstation 2
Released: 2000, 2002
Recommended Version: The computer ports are easily the ones to pick for their moddability (Deus Ex: Revision in particular is fantastic) and a much-improved interface over the PS2 version.  However, the PS2 version is worth look for a few interesting exclusive elements - the characters are much more smoothly animated (utilizing motion capture to provide more expressiveness) and it contains exclusive FMVs for the intro and ending scenes.
Labels: ⭐⭐⭐⭐, 🎵, 👑, 2000, Full Reviews
Newer Post Older Post Home