Ys V is the only game in the Ys RPG franchise to never get a modern re-release, as well as the only one which, to date, has never made an appearance in the west.  But is this because it's a lackluster game, or simply because of the timing of its release? 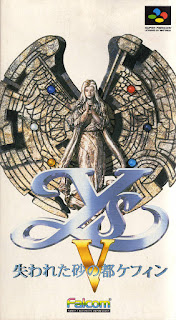 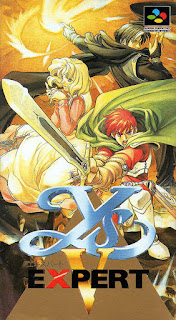 The Ys series' history is definitely a convoluted one, with numerous ports and versions across countless consoles, each developed by different companies.  Ys IV is perhaps the perfect example of this, with four different versions created over the years for the Super Famicom, PC-Engine CD, Playstation 2 and finally the Playstation Vita, all created by different companies and featuring much different gameplay and takes on the same overall script.  But while at least one version of each game has made its way to western shores over the years, there remains one outlier - the fifth game in the franchise has yet to be localized (even in remake form) as of 2019.

It is certainly an odd game in some respects, too.  It was the first top-down Ys game to utilize a jump button, which added a touch of platforming to the game, and also the first (besides Wanderers) to utilize a more traditional, Zelda-esque combat system, utilizing two different buttons on the controller to swing one's sword and raise their shield to block attacks.  Standard features in many action-RPGs, yes, but relatively new to the Ys franchise, which became known for its touch-based combat that was inspired by Hydlide.

Ys V was also the first to utilize a magic system.  While several prior Ys games had spells to cast (most prominently the second game), Ys V's mechanic for it is relatively fresh.  After collecting three "element stones", one can take them to an alchemist to craft them into a "Fluxstone", which can then be equipped on one's weapon to use that spell.  Strangely, it also operates off of two values - a traditional MP count (with different spells depleting more or less of it) and a "charge value" from 0-100 so that one can't simply spam spells continuously.  In order to cast a spell, one must repeatedly press the R trigger to fill the Charge bar, then press the Attack button to fire the spell; definitely not the most intuitive thing in the world.

Adding to this, Adol now has two different types of experience and levels to keep track of - Physical and Magical.  Enemies give the same amount of experience when defeated, but killing them with a weapon will raise Physical (Boosting HP and Strength) while using Magic will raise Magical levels and add MP, Intelligence and Will (magic resistance).  Sort of like a more streamlined Final Fantasy II, though thankfully you also cannot lose stats and levels in this game.

Unfortunately, while this all sounds interesting on paper, it doesn't end up being as fun in execution.  Most of the powerful spells aren't available until relatively late in the game, meaning that you'll probably lag behind in Magical levels for a good portion of the experience, and the crafting system is irritating in that you really don't know what you're getting until you've already spent the Elemental Stones, so you'll either need a guide handy or just have to partake of a fair bit of trial and error.  Most of the powerful spells also have an extremely long startup time, meaning that enemies will often move out of the way (or hit you) before you can finish casting them, making them far less useful than you'd expect.  Finally, the game is quite easy by Ys standards, so I never really found that leveling up my Magic stat was a worthwhile endeavor, especially when I could defeat most bosses in relatively short order with just physical attacks and a bit of footwork to dodge their spells.  Indeed, the last point was also a common complaint with Japanese gamers, to the point where only a few months after the game's debut a reworked "Expert" version was released that made enemies and dungeons significantly more challenging and more on par with Ys series standards.

Ys V is an oddity in its aesthetics, too.  Rather than the bright, colorful and cartoony style that became the franchise's hallmark, this one seems to be going for something more akin to a later-era Super Famicom RPG like Terranigma or Bahamut Lagoon.  The "chibi" style characters are gone in favor of more realistically-proportioned sprites, and the visuals are in a more realistic style, with a darker palette overall and a high amount of detail that showed off the full power of the Super Famicom.  It honestly looks great, too - easily on par with the games whose style it's trying to emulate.

The overall mood of the game matches the visuals, taking on a more bleak tone with some darker characters than had been seen before in the series.  Taking place on the continent of Afroca, Adol is enlisted into a wealthy merchan't squest to find the secrets of the lost city of Kefin, which vanished five-hundred years prior, and discover the cause of the ever-spreading desert that threatens all life on the continent.  As things go on, however, Adol finds himself in the midst of yet another world-threatening plot, as well as the tragic tale of the a character named Stoker who knows more than he lets on.  This is compounded by the soundtrack, which has far less of the intense, action-conveying rock tracks the series is known for and more of an epic orchestral score.  A very stark change for the series, but not an unwelcome one, as it remains on par with Falcom and Ys's high standards for musical scores.

So, all told, is Ys V a black sheep in the series?  Far from it.  Rather, I think of it as another experimental entry in the series as Wanderers was, attempting a lot of new things with mixed results.  Its overall action-RPG design is solid (undercooked magic system aside), it attempted to convey a darker mood than the series norm, and while it is a bit jarring to see a visual and musical style unlike anything prior in the series, both are so well-done that it's hard to mind it too much.  But while Wanderers shook things up a lot, Ys V may have not taken things far enough, and as a result it simply doesn't stand out a whole lot from other RPGs of the time.  Basically, it's a middle-of-the-road action-RPG, having nothing inherently wrong with it but not a lot to differentiate itself among other mid-90s releases.  Certaintly worth a go for series fans, but it will probably be overlooked by more casual RPG fans, especially for a system and time period known for having some of the best examples of the genre even today. 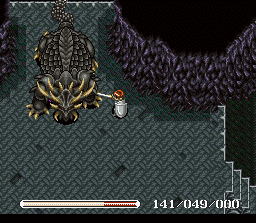 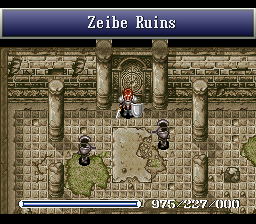 Developer: Nihon Falcom
Publisher: Nihon Falcom, Koei
Platform: Super Famicom
Released: 1995, 1996 (Expert)
Recommended Version: Those more used to the series' difficulty level should probably spring for the Expert version, though at the time of this writing the English fan translation is incompatible with that version, only working on the first (easier) release of the game.  There is also a PS2 remake by Taito, though I have not played that one.