The followup to Startropics, released in the Nintendo Entertainment System's twilight days and only in North America (until many years later when the Virtual Console debuted).  Does it prove to be a worthy sequel to a beloved NES cult classic, or is this just a franchise-killing dud? 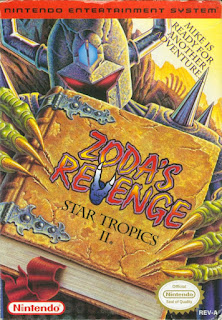 StarTropics was a modest hit for Nintendo, so naturally a sequel was inevitable.  Unfortunately for many, it would come out almost four years later in early 1994, at a time when the NES was all but dead and the Genesis and Super Nintendo were the hot properties on the block, so it got relatively little attention.

Zoda's Revenge was also something of a changeup in format from the first game.  The game is still a relatively linear take on the Zelda format, broken up into distinct "chapters" with their own environments to explore, but Zoda's Revenge goes in a new direction by introducing time travel to the plot.  Indeed, each chapter is now a different time period to explore, from prehistory to ancient Egypt to medieval Europe to Victorian England.  Befitting this, each period has a much different aesthetic to it, as well as their own sets of sub-weapons and historical figures, both real (Leonardo da Vinci, Cleopatra) and fictional (Sherlock Holmes and King Arthur).  This gets used to rather humorous effect a lot of the time, such as having to deliver a pizza to Cleopatra, and ends up feeling like the Bill and Ted movies at several points, which adds a bit to the game's charm.

Not a lot has changed on the gameplay front from the first game.  Most of the same powerups still appear here, and even the Bola sub-weapon makes a return, with the new weapons present mostly just being slight variations on that.  Mike now gets two weapons instead of one for much of the game, with the second slot in his inventory always being taken up by the "Psychic Shockwave"; this tends to have better range and fire rate than your base weapon, but does slightly less damage overall.  As in the first game, this does also power up over the course of the story, though once the player falls below a certain health threshold, the weapon will be downgraded to a weaker form until their health is restored.

One significant change is that Mike's movement is no longer grid-based; he can freely move and fire in eight directions now, which can be slightly awkward for those who have adapted to the first game's control setup.  Indeed, I found myself overshooting platforms on more than a few occasions at first, and in the later stages, missing jumps because I wasn't close enough to the edge before making a leap to the next one.  The notable delay in the controls is also gone, so with a bit of time, you'll adapt to it and be platforming, shooting and dodging attacks with little effort.

Zoda's Revenge is also a considerably more forgiving game than the original StarTropics.  There are far fewer instances of cheap "death traps" that kill you for simply taking a wrong path, and enemies on the whole tend to do far less damage than they did in the first game (particularly making contact with bosses, which was almost always an instant kill in Startropics 1).  The game is considerably more generous with powerups too, with quite a few more medicines and invincibility stars at the player's disposal, making some of the tougher battles considerably less harrowing.

Startropics II isn't a perfect update, though.  The sense of exploration is largely gone in this game, with the player simply following a linear path most of the time and very few hidden secrets both on the world map and in dungeons.  One doesn't get the thrill of having a vehicle to operate as they explore (such things do exist, but only in storyline cutscenes) and a few of the levels feel relatively uninspired.  In particular, I think of the Transylvania stage, which feels like it was thrown in at the last minute just to give the game a bit more longevity.  The music also doesn't captivate in the same way the first game's managed to, feeling rather generic a lot of the time, and the enemy designs often feel like "token video game monsters", lacking much of the uniqueness and personality of the original game's.  There are more than a few instances of palette swapped enemies too, which only serves to make the levels feel much less distinct than the original game's.

In the end, Zoda's Revenge isn't quite as well-designed or memorable as the first game, but it remains a fun and captivating adventure.  The sense of humor, as well as the enjoyable storyline that never takes itself too seriously, keep it fresh in spite of its somewhat generic design, and the gameplay is still strong enough to let it rank as one of the better action-RPGs on the system.  It may have come just a bit too late in the NES's lifespan for it to get the proper attention from its devs or for a lot of fans to take notice, but it is a worthwhile sequel to an NES classic. 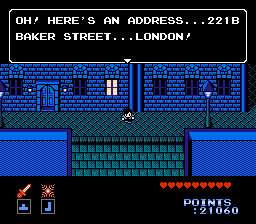 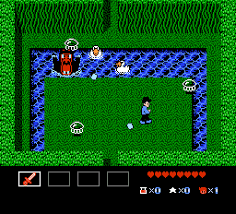