Based on a Japanese horror movie, Sweet Home was a unique RPG that also served to establish many key elements of survival horror (and, many years later, would serve as a primary inspiration for Capcom's Resident Evil franchise).  But does Sweet Home still prove to be an enjoyable experience today, or is this just another forgettable take on the horror genre in gaming? 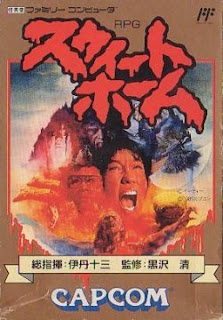 Capcom as a company needs no introduction; if you've played video games at all from the mid-80s to anywhere in the modern day, you've probably played or at least heard of one of their games.  Nowadays they're probably best known for Resident Evil, the series which coined the term "survival horror" and challenges the player to manage limited resources, avoid enemies when possible and make their escape from a dangerous, monster-infested environment full of traps and puzzles.

Years before the franchise debuted on the Playstation, though, Capcom had another prominent cult classic on their hands in Sweet Home, based on a horror film of the same name.  (In fact, Resident Evil actually began its development as a remake of Sweet Home, but as Capcom couldn't secure the licensing rights to the film, they opted to make an original game instead.)  Both games shared many similarities, but while Resident Evil was more action-based, Sweet Home was an RPG with turn-based combat and a team of five characters to control, each of whom had slightly different abilities and a unique item to use in both combat and solving puzzles.

Sweet Home operates somewhat unusually for an RPG in that the party doesn't necessarily have to stay together; in fact, the maximum party size when not in a battle is three, requiring the player to split into at least two groups whilst exploring.  However, one can temporarily have four or all five characters join in on a particular enemy encounter if they are in close proximity when the battle begins (or the other team moves closer to the team currently in combat), which proves to be necessary to defeat some stronger foes.  A bit strange, but it does help to cover ground more quickly, and the fact that one gains levels relatively fast ensures that having a party of only two (or even one) won't put them at too severe a disadvantage.

Many prominent elements of survival horror had their beginnings with Sweet Home; most prominently the emphasis on puzzle solving and the limited supply of healing items available.  Frequently throughout, one will have to utilize each character's particular skill to clear obstacles, or simply find equipment along the way in the form of stronger weapons or objects that can be used to traverse hazards (such as wooden planks used to cross gaps in the floor, which can lead to a fatal drop if one steps over them unaided).  Much of the plot is told through frescoes, hidden notes, journals and the like rather than simply unfolding through in-game dialog, letting the player feel as though they're slowly piecing together a mystery rather than walking through a linear JRPG plot.  Similarly, there is only one type of healing item in the game (Tonic) and relatively few can be found, though it is worth noting that they will fully restore the entire party's HP when used, so one can easily maximize their mileage with them by grouping the entire party together before using one.  Inventory space is very limited, with characters only able to carry their unique item, two extra items and one weapon, so careful management of resources is key.

Sweet Home has some other unusual features, too.  Unlike many RPGs of the time, there is no returning from death - once a character is dead, they're gone for good, which can put the player at a severe disadvantage for the rest of the game.  This isn't as unforgiving as it sounds, though, as the player can save their game at any time and reload if things get too out of hand, which it probably will a few times before the player is familiar with the mansion's layout and the placement of key items.  Also worth noting is the fact that Sweet Home has five different endings, with the one the player gets depending upon how many characters survived; similar to Resident Evil or Silent Hill, this does add a bit of replay value to the game.

Your five characters also contribute much to the proceedings with their unique abilities and items.  Kazuo comes equipped with a lighter (a prominent item in Resident Evil as well) that can be used to burn ropes, light candles to traverse dark rooms, or simply damage enemies.  Akiko comes equipped with a health kit that cures status effects (but does not restore HP), Ryo has a camera that can snap pictures of the various frescoes in the mansion to uncover clues or damage certain enemies.  Asuka the maid comes equipped with a vacuum cleaner, which can vacuum up broken glass or clean dust from frescoes so that Ryo can photograph them (though sadly you never use it to capture ghosts, Luigi's Mansion style), and finally, Emi has a key that can unlock many locked doors, making her extremely useful for acquiring extra items.

As many familiar with the NES era  of gaming knew, Nintendo was notoriously stingy about maintaining their family-friendly image, with a lot of darker and more violent elements of games either being censored or removed outright.  Nintendo of Japan was much more lax in this regard, though, and Sweet Home is a perfect example.  Not only is the game genuinely creepy, with a claustrophobic environment, eerie backing music throughout and very disturbing implications as one uncovers the plot, but it doesn't skimp on the gruesome sights either.  Torture chambers, bloody skeletons, zombies missing half their faces, hallways full of carnivorous worms, and even some shockingly gory death scenes for the main characters are all prominent sights in Sweet Home, adding to the horror of the scenario in surprisingly effective fashion despite the limitations of the platform.

Sweet Home accomplishes what it sets out to do, providing a horror-based movie game experience that not only proves to be surprisingly tense with its limited resources, but genuinely creepy too.  The fragmented plot, emphasis on character teamwork to survive the numerous traps and enemies, and a consistently off-putting atmosphere make the game into an enthralling and memorable experience.  Fans of survival horror should give it a look as a historical curiosity, while fans of RPGs owe it to themselves to check it out as one of the best examples of the genre on the system.  As the latter, it's hard for me to play it and not feel just a little robbed; even if RPGs were a popular genre in the west at the time of the game's release, Nintendo probably wouldn't have let it fly outside of Japan anyway owing to its violent content. 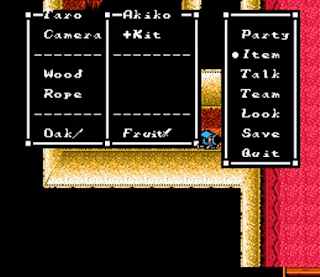 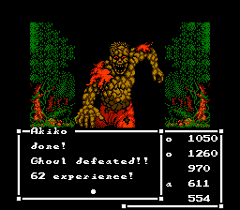