A relatively forgotten Nintendo IP which was developed by a Japanese studio but ironically never released in that region; only in North America and Europe.  But does Startropics hold up to the test of time, or is this one short-lived franchise that is forgotten for a reason? 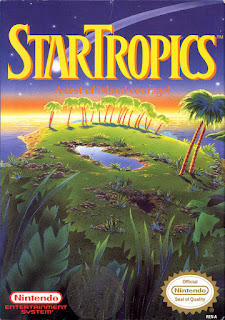 The Legend of Zelda was a huge game in the early days of the NES and still a hugely influential one even today, so it's little surprise that other companies would try to make their own versions to cash in.  From Golden Axe Warrior to the Neutopia games to Crusader of Centy to Beyond Oasis ("The Story of Thor" in some territories), Zelda's style of gameplay was far-reaching and, whether you played the original or not, you probably at least saw a game based on its style.  But after the first game's success and the more mixed reception of the second game, it would be a while (and a new generation) before Nintendo released another entry in the franchise proper.

Perhaps to tide over their western fans, Nintendo R&D3 and Locomotive Corporation created a new IP that drew inspiration from Zelda's format while working in more of a modern and irreverent style of narrative.  Thus was born Startropics - a game set in the fictional C-Island chain in the southern hemisphere and following the exploits of Mike Jones, a teenager who embarks on a quest to find his missing uncle.  As a nod to the modern setting, the player's primary weapon is a yo-yo, and several of the weapon pickups they find are similarly modern - slingshots, baseball bats, mirrors to reflect projectiles back at foes, and spiked cleats to attack all enemies on the screen at once.

Similarly fitting are many elements of the adventure itself.  The player encounters the usual complement of ruins, flooded caverns, hidden passages and switch puzzles in each one, as well as enemies like bats, snakes, mummies, skeletons and the occasional Indiana Jones-style boobytrap, several modern elements make their way into the proceedings too.  The player soon acquires a submarine called the Sub-C to make their way between islands, and they interact with many silly characters and scenarios throughout the adventure like a talking parrot (that must be bribed with a worm) and a giant organ that one must play a specific song on to open a passage.

Gameplay itself is reminiscent of Zelda in many ways, and the action element of the game is no exception.  Taking place from a top-down perspective and having the player move from room to room, solving puzzles and defeating enemies, it's the same overall formula.  Even the powerups are similar, with enemies dropping hearts to refill Mike's health, stopwatches to temporarily stop all enemies' movement, medicine to restore a portion of health on demand, or stars; collecting five of these will restore one heart to the life gauge.  However, Startropics does have a few unique elements to distinguish itself.  For one, most items the player finds and utilizes are specific only to that dungeon, and often limited in use besides; if one finds a lantern to light up dark rooms or a Rod of Sight to see invisible enemies, they will generally only get a few uses of it before having to find more (and all will be taken away once one dies or completes the dungeon).  Second, the game operates on a lives system; the player begins with two lives, and dying while one still has lives left will simply cause them to restart at the last checkpoint rather than having to redo the whole dungeon.  One's stock of lives will be replenished upon completing a dungeon, but one can also find a "Try Your Luck" sign as a hidden bonus in many levels that will grant one to three extra lives or, if unfortunate, take one away (thankfully it will not do this if the player is on their last life).  A few unique powerups appear in specific dungeons too, such as Anklets (which double one's jumping distance) or Vitamin X (which maxes out the player's health gauge but causes any health over their maximum to slowly 'bleed off', similar to Quake).

Startropics is a considerably more challenging beast than Zelda, though.  For a start, Startropics loves to throw at the player death traps that can be considered "cheap", doing things like punishing them for taking a wrong path by forcing them to backtrack a significant portion of the dungeon or even causing instant death (with no forewarning of this fact at all).  Second, the game is quite heavy on platforming puzzles, forcing the player to hop across numerous platforms in rooms to reveal a hidden switch, then hop over and press it, avoiding or defeating enemies all the while.  Movement in the game is grid-based and somewhat stiff, which is fine for hopping platforms but can be somewhat cumbersome when trying to deal with a large number of fast-moving enemies.  Enemies, particularly late in the game, can be downright frustrating, moving quickly and dealing huge damage (or even instant death) on contact while taking huge amounts of punishment themselves.  Mastering the slight delay in your movement, as well as the art of jumping, turning and firing while in flight, quickly become essential skills to master, as does knowing the shortest route through the levels simply so you have fewer enemies to deal with on the way to the end.

Another clever element of the game was a letter included in the game's original box, filling in a bit of backstory and providing a novel trinket for those who bought the game new.  However, it saw use within the game itself too, as at one point the player is prompted to dip the letter in water in order to reveal a hidden passcode so that they can continue with the game.  Naturally, those who bought the game used probably didn't get said letter with it, resulting in much confusion as they searched the entire game for something that didn't exist within its code.  Naturally, Nintendo was deluged with questions concerning the letter and the code it held, to the point where they eventually gave in and printed the solution in a later episode of Nintendo Power.  This was more a hallmark of games like Ultima on the PC, which included numerous trinkets and instruction books written from the perspective of in-game characters and the like, so to see it on a home console was a novel inclusion (even if it ultimately came back to bite its creators in a bad way).

Startropics is a unique game in many respects - developed by a Japanese company but never released there, taking part in a quirky, humorous and modern setting years before Earthbound would arrive on the scene, and having a novel fourth wall breaking gimmick packed into its box that few console games before (or since) would ever attempt again.  It may have been a bit clunky in gameplay and frustrating in design, but its charm shone through, delivering a fun adventure with a lot of twists, unique sights and creativity as ending up as a distinct and memorable game that stands out among the NES's best.  It really is a pity that, despite its cult classic status, Nintendo hasn't really done anything with the franchise in twenty-five years save for the token digital re-release. 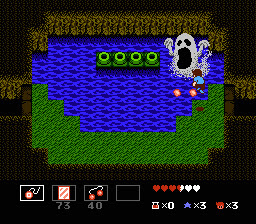 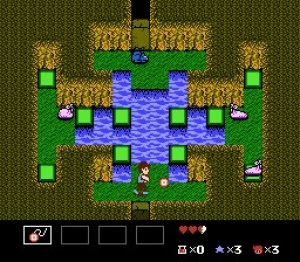 Developer: Nintendo R&D3, Locomotive Corporation
Publisher: Nintendo
Platform: NES, Wii Virtual Console, Wii U Virtual Console, NES Classic Edition
Released: 1990, 2008, 2015, 2016
Recommended version: All of the later versions are ports of the original, though with some slight tweaks; the Yo-Yo is renamed to the "Star" owing to a copyright issue, and the infamous letter's text is shown in the online manual, complete with a bucket icon one must click to reveal the hidden code.