The Legend of Zelda: A Link to the Past

The Zelda franchise's third entry made the leap to the new generation and became the first (and only) Legend of Zelda on the Super Nintendo.  But does Link to the Past successfully capture the magic of its predecessors, or does it just stop short? 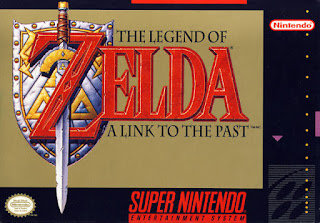 Link to the Past was of course one of the most anticipated games when the Super Nintendo was first announced; the first two Zelda games being as popular as they were, it was little surprise that Nintendo would want to keep one of their most popular franchises going.

They certainly made every effort to have it take advantage of the new hardware, too.  While the first two Zelda games were relatively light on storytelling with only a minimum of in-game dialog, Link to the Past makes efforts to have its world feel like a living, dynamic place.  The game is now replete with NPCs with numerous pages of dialog apiece, and the world as a whole feels much more alive, with locations like a sprawling lake (fed by a river and waterfalls), fields full of grass and bushes (which the player can cut down with their sword), a foggy forest with a shadowy canopy overhead (complete with parallax effect) and even a desert with cacti, vultures and bleached bones.  While previous Zelda games (2 in particular) had similar locales, the player didn't get to see and interact with them on anywhere near the same level.

Storytelling for the series has taken a definite upturn too.  While in the first two games the backdrop for the action was mostly told through the manual (and a number of colorful illustrations therein), Link to the Past instead opts more for an in-game narrative, with a gorgeously-illustrated storybook intro, a running narrative throughout with a few creative twists, and the aforementioned characterizations lending the game an epic, movie-like feel.  This only gets compounded further when one considers the soundtrack, which took full advantage of the SNES' capabilities to deliver an orchestral score that only compounded the cinematic presentation further and lent a lot of emotional weight to all of the in-game locales and events.

As Zelda II's change in gameplay style proved controversial among fans, Link to the Past opted to return to the top-down view and four-directional action of the original game, and even returned many of the familiar enemies that were left out of Zelda II, such as the Like-Likes and Zoras.  Things are certainly not constrained to single-sized square screens, though - maps can scroll both horizontally and vertically, and the world doesn't feel at all like it's built on a static grid, with nicely-rounded corners on cliffs, trees and even a lot of buildings.  Exploration is somewhat more constrained than in the original game, but this lends way to a much greater variety in LTTP's puzzle-solving - by completing dungeons and finding various hidden items, new paths will open and new methods for dealing with almost every enemy will be found.  For example, finding the Power Glove will let the player lift up rocks to open new paths and uncover secrets, while finding the Ice Rod will allow them to freeze enemies, letting them pass by unperturbed.  Others have a variety of effects - using Magic Powder on the normally invincible "Anti-faeries" will turn them into regular Faeries that restore the player's health, while the Flippers enable travel in the water.  The series staple of reusable bottles also debuted here; once the player acquires an empty bottle, they can use it to store purchased potions, captured faeries or even bees that, once released, will attack enemies for a short while before flying off. In total, there are over thirty items to be found in the game - quite a few more than any prior Zelda - and many have multiple purposes, leading to a lot of fun and rewarding exploration and experimentation for the player.

Expanding upon this, after a set point in the game, the player is thrust into the "Dark World" - a twisted mirror of Hyrule whose inhabitants and monsters alike are twisted into new, bizarre forms.  The world itself is in the same state, with a number of subtle changes between the two hindering the player's progress at times (with many open paths in the Light World leading to dead ends in Dark World) and leading to secrets in the other.  For instance, an inaccessible high cliff in the Light world may be a flat piece of land in the Dark world, so if the player warps to the Light world at that point, they can appear atop the cliff and access the item within it.  As in previous Zeldas, uncovering clues and having a keen eye for subtle tells to the location of secrets are key skills to have, both for progression and for finding non-vital but useful items such as Heart Pieces and Bottles.

Link to the Past, like the two games before it, proved to be a monumental success, and it's easy to see why.  Its excellent presentation, epic feel and hugely expanded gameplay and design over the originals made it into something both familiar and very unlike anything seen prior for the franchise.  Its puzzles are many, but never too cryptic to figure out, and its smooth gameplay, creative bosses, enthralling world and overall satisfying design make it a joy to play.   It speaks volumes that, despite playing this game since the 1990s, I've still been finding new mechanics and design elements each time I revisit it, and I've also never once grown bored playing it.  A true masterpiece. 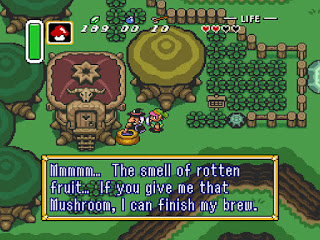 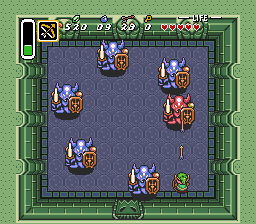 Developer: Nintendo EAD
Publisher: Nintendo
Platform: Super Nintendo, Game Boy Advance, Wii Virtual Console, Wii U Virtual Console, *New* Nintendo 3DS Virtual Console, Super NES Classic Edition
Released: 2019
Recommended version: Most later versions of the game are direct ports of the original SNES version, though the GBA version does have some slight changes, most prominently adding Link's voice from the later 3D Zelda games when he swings his sword or takes damage.  This version also has an exclusive multiplayer component called "The Four Swords" where up to four players work together to solve puzzles and defeat bosses in three short dungeons exclusive to this mode.