After two outings on the Playstation 2, a card-based spinoff for the Game Boy Advance (later remade for PS2) and a co-op multiplayer experience for the DS, Birth By Sleep marks the Kingdom Hearts franchise's first outing on the PSP, as well as a return to basics of sorts for its gameplay and overall format.  But does Birth By Sleep prove to be a worthy entry to the series, or is this just another Kingdom Hearts game that will be played once for its story and then quickly discarded? 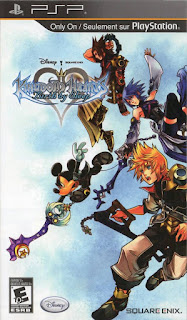 The fifth Kingdom Hearts game in eight years (not counting rereleases and one remake) was, if nothing else, proof that a concept as weird as Disney meets Square Enix could work.  And while opinions on individual games and their mechanics are sharply divided, the franchise has remained consistently popular, with each entry selling copies in the millions and continuing its running narrative, ensuring that even if a particular game isn't to one's tastes, they're likely to buy and play through it anyway just to avoid missing out on the storyline.

Birth By Sleep is a very good example of this, being a prequel that takes place ten years before the first Kingdom Hearts and setting up several story elements that would become key elements of later games.  Three new protagonists take up the reins for this game - Ventus, Aqua and Terra, with each somewhat fitting the character creation archetypes of the previous games (with Ventus as a faster character, Aqua as a magic-user and Terra as a slower-but-stronger fighter, though these are certainly not set in stone).  While only one character's side of the story can be played at a time, each follows a separate route through each level and the overarching story that interweaves with the other two, effectively creating a triple-faceted narrative comparable to something like Suikoden III.

Mechanically, Birth By Sleep also goes back to basics to a large degree.   The heavy emphasis on over-the-top, juggle-heavy combat from 2 is largely gone, and the Drive ability is exhumed completely.  Instead, combat is Something of a hybrid of Kingdom Hearts 1 and Chain of Memories, though with considerably more polish.  Basic movement and attacks feel significantly more crisp instead of irritatingly sluggish, and the basic block and dodge moves are integrated into one's moveset by default (with the latter having a much larger movement range and being far more useful as a result).  Sadly, one still cannot cancel most actions mid-animation, so some diligence must be employed to ensure  you don't get stuck taking damage when you commit to an attack animation and are unable to dodge.  One also has a useful new ranged attack mapped to the R1 button; pressing this temporarily puts the player in a first-person perspective, where they can lock onto up to ten targets at once and then press the X button to launch a fast, unstoppable combination attack; while not quite as abusable as it sounds (running off a limited Focus meter that one must recharge through normal attacks), it can prove extremely handy in dealing with larger crowds or persistent, annoying enemies that like to attack at range.

Instead of the rather cumbersome Final Fantasy style menu interface for spells and special moves, the player builds a 'deck' of commands that they can quickly cycle between via the D-pad, then activate with the Triangle button.  This allows one to quickly, for example, cast a Slow spell on a newly-spawned enemy group, then follow up with a Strike Raid ability to damage several of them before they can separate.  Others can be chained to basic actions such as Block to enable new abilities, like the ability to parry an incoming attack and then immediately follow up with an invincible counter-move.  Rather than running off an MP bar, each individual command in one's deck runs off a cooldown meter, with more powerful commands generally taking longer to recharge.  Landing hits and using commands will fill a gauge at the top of the HUD, and once it fills completely, one will enter a "Surge" mode that bolsters the player's attack and grants them a powerful finisher at the end of a combo; however, failing to attack enemies for a short period will rapidly deplete the gauge, so the player is encourage to constantly keep on the move, defeat enemies and use their commands efficiently to maximize their damage output.

Adding further to this, using certain commands in sequence will put the player into a powered-up state known as a Command Style, with more being unlocked as the game progresses.  For example, Terra can enter a style called Critical Impact by utilizing several physical attack Commands in sequence; this powers up his normal attacks and gives him a powerful combo finisher that emits a large shockwave, damaging anything in its range.  Later on he will unlock the Diamond Dust Command Style, which is triggered by utilizing ice-based commands (spells and otherwise); this one puts more emphasis on dealing damage over a larger radius, making it better for dealing with groups of weaker enemies.  Many of these exist, and while some are exclusive to particular characters, it is fun to try them all out and see which ones will suit you best in any given situation, customizing your Command deck accordingly.

In addition to one's own Command decks, progressing through the story will have characters forming "Dimension Links" with other characters.  These essentially serve as premade command decks that temporarily replace the player's, giving them a tie to various Disney characters (and the other two main protagonists) as well as new, unique finishers and the ability to do things like heal oneself without having to spend one's own limited Command Deck slots on potions and/or healing spells.  However, one cannot rely on them too highly, as D-Links run off of their own gauge and can only be activated once it is filled completely.

Individual commands each have experience meters and levels that go up with repeated use, and once their levels are maxed, one can combine them together to create new commands.  One can also add in synthesis ingredients to give commands additional properties, such as dealing extra damage or boosting the player's chance of landing a critical hit.  Once a command with an ability has its level maxed out, the skill is permanently added to the player's repertoire and they will permanently gain its benefit (up to the maximum level that skill allows).  One can freely combine almost any two abilities in their inventory to make a new one, though they will not be able to preview the result until they play through the game and acquire recipe books from various chests.

One need not just repeatedly battle enemies or grind cash to buy and power up Commands, though.  While there is no Gummi Ship element this time (despite featuring a similar world map to 2), Birth By Sleep features a minigame called "Command Board" where one can instead play a board game to accomplish the same effect, with new board layouts being added as the player completes worlds.  Playing very similarly to Square's Fortune Street franchise, the game operates on a similar principle to Monopoly, with the player moving about the board, purchasing spaces (by placing their Command cards on them) and stealing points when other players land on their purchased spaces, with the goal being to reach a set number of points to win.  Similarly, each time one makes a lap around four checkpoints on the board and returns to the goal they earn points, and a number of bonus panels and traps will help or hinder them as they move around.  Furthermore, one can play combinations of cards from their hand to gain an advantage, such as forcing one of their opponents to sit out a turn or allowing them to roll multiple dice at a time to move further.  Whether the player wins or loses, they will gain some experience and a new Command or two, though naturally winning the game results in a more profitable outcome.

Another optional venture comes in the world of Mirage Arena, a world that has no bearing on the main plot and, in the PSP release, serves as a hub for multiplayer content.  Here, one can face off against other players in a combat arena, battle rounds of enemies, play Command Board against other players, or even take part in a racing minigame slightly similar to Mario Kart.  In the HD ports, however, this element has been substantially reworked to be a strictly single-player experience, with victories in events granting coins that can be spent on rare items and commands.  Essentially, it's BBS's version of the Gold Saucer - a largely separate but entertaining diversion from the main game that can nevertheless grant the player a significant advantage if they spend a lot of time there.

Birth By Sleep is a bit of an odd case, taking a few steps backward in its design theory from where Kingdom Hearts II left off and even retooling a few unpopular elements of previous entries; however, it all works out surprisingly well, with the combat in the game being well-balanced and quite enjoyable, the storytelling taking a new turn with its three-pronged narrative and even most of the optional content in the game proving to be extremely well-crafted and fun.  It does take a hit in the aesthetic department due to being a game designed for substantially less powerful hardware (leading to short, annoying music loops and unintentionally funny moments like an audible cheering crowd in an empty stadium), but all in all, Birth By Sleep is one of the franchise's best games, and for me at least, a significant step back up in quality after the aggravating combat and design of 2 and CoM. 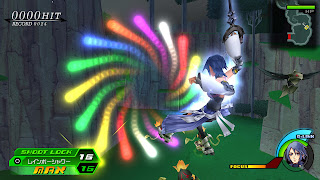 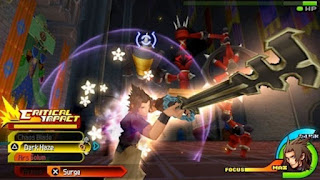