After a few entries that attempted to rework the gameplay and storytelling format with decidedly mixed results, Suikoden V was a return to form for the franchise, going back to a linear narrative and a more traditional style of gameplay overall.  But does Suikoden V bring back fans that were driven away by the series' new turn, or does it just go too far in this direction and feel like a retread? 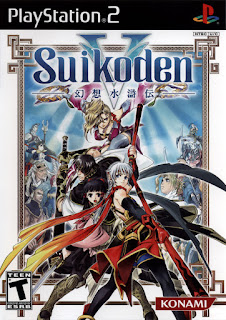 Suikoden's leap to the Playstation 2 was a mixed bag; for newcomers to the series, the third game provided a relatively fresh RPG experience with its multiple-path narrative and engrossing storyline, though long-time series fans were somewhat let down by its flagging pace and changed-up gameplay mechanics.  Suikoden IV, created after long-time series director Yoshitaka Murayama left Konami, proved to be an overall mediocre entry with a generic story and little connection to the rest of the series (being a prequel set 150 years prior to the first game).  Suikoden Tactics, while a competent spinoff, proved to be short and, again, a mixup in gameplay that more traditional RPG fans didn't care much for.

So, as franchises often do when they begin to drop in sales, Suikoden V attempted to take things back to basics with a design philosphy more in line with the first two games - traditional turn-based RPG combat, a crisper pace and a more focused storyline.  It does admirably well on the final point, showing a queendom divided between two rival factions and strife among its populace as their queen slowly slips into madness.

But while the game does go back to the style of the originals in many ways, some elements of the later games are retained as well.  The player now has the choice of several formations in basic battles, allowing them to arrange their party in various ways to gain stat bonuses and put fewer characters in harms way.  For example, the Cross formation puts only one character on point, making them the target for most enemy attacks, but grants everyone in the party a bonus to their attack.  Double Arm puts two characters on point, gives all characters in the party a small defensive boost, and enables the use of the Guardian ability, which boosts the party's defense further for a single turn.  The player starts with just one basic formation that grants no bonuses, but more are found throughout the game, both in chests and as rewards for meeting certain requirements during war battles or particular quests.

The "Convoy" position of early games (here called "Entourage"), formerly just a place to put story-relevant characters until they could serve their plot purpose, now plays a more significant role in Suikoden V.  One can have not just their basic party of six in combat, but up to four more can be part of the Entourage, with the player able to swap them with active characters mid-battle to give their party more longevity in boss battles, or versatility in dangerous areas.  This also affords ways for non-combat characters to prove useful, as several will grant bonus effects when placed in the Entourage.  Egbert, for example, will cause the party to gain more gold from combat, while Marina will allow them to restore a small amount of HP each turn.  Not all necessarily pertain directly to battle, either; for example, Shinro's ability replaces the "Drop" command in the item menu with "Trade In", allowing the player to earn money for items they drop as if they'd sold them at shops.  In various ways, all of these things make life easier for the player, allowing to earn cash and battle enemies more efficiently.

Skills are another returning element from the newer games, this time from Suikoden III.  As in that game, one can spend points earned through battle to bolster specific stats or, in the case of certain characters, unique abilities like Long Throw (giving ranged attacks a chance to hit an entire row, rather than a single target).  One also has a pool of "Party Points" that are stored separately and can be spent on any character, even those that haven't had an opportunity to see much battle yet, which can help to get weaker characters caught up (particularly later in the game).  Throughout the game, one can also find "Epic Skills" that effectively serve as all-in-one skills, bolstering multiple stats at once instead of one at a time

As in prior Suikodens, the game has three different combat systems for one-on-one duels, small-scale battles and large-scale battles.  While duels and small-scale battles remain relatively similar to the first two Suikodens (save for a few aforementioned differences), duels do have a couple of small changes.  First is that there is a time limit per turn; if no action is input within 3 seconds, the player will take a random action, which can prove hazardous to them.  The other prominent change is that if both players choose to Attack or Special attack, their attacks will clash; the player can then mash the button at this point to overpower the opponent and damage them without being harmed themselves.  Regardless, the overall strategy remains much the same - try to predict what the opponent will do based on their words, then counter it accordingly.

War battles are relatively similar to Suikoden II's, with a defined rock-paper-scissors weakness/strength hierarchy for units, though battles now work something like the Active Time Battle system in Final Fantasy, being in real-time save for when the player brings up the menu to take an action (at which point time pauses to let them make their decision).  Sea battles from IV return as well, though in a simplified format - similar to ground battles, there is a defined rock-paper-scissors heirarchy, with a few special units mixed in and individual characters' special abilities lending them unique tactics (such as healing some of their injured soldiers or damaging foes over an area of effect).

Suikoden V is a well-made game on the whole, but a few elements may be off-putting to some.  Probably the most prominent of these is the game's overall pacing, with a relatively slow start to the storyline proper (taking ~10 hours before you have a proper war battle and even longer before you get your castle), frequent load times and a rather irritating encounter rate.  Second, while the game overall has quite good production values (with nearly every character having a unique voice actor and well-animated cutscenes), the game does have a fairly drab color palette overall, with a lot of rather bland gray and brown towns and dungeons.  Even the more colorful cities, plains and forests have a relatively washed out palette, making the world feel bleaker than was probably intended.  Towns and dungeons can also at times be excessively large and confusing to navigate, which led me to some frustration as I played.

In spite of a few shortcomings, though, Suikoden V proves to be another worthwhile entry in the series, returning its design to form for fans of the original PS1 games while working in elements of the later titles to give it broader appeal.  Its engrossing story, a large yet distinct and fun cast of characters and a surprising amount of variety lend it much appeal, as does having multiple endings and plenty of hidden secrets for diligent RPG players to enjoy.  It really is a pity that this was the last proper Suikoden game and, aside from a mediocre spinoff game on the DS, the franchise hasn't really been heard from since. 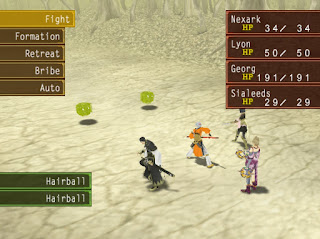 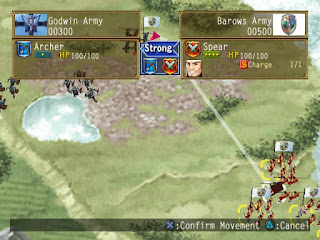