ToeJam and Earl: Back in the Groove!

The fourth entry in the ToeJam and Earl franchise brings the series back to the limelight for the first time in sixteen years.  But does the cult classic franchise manage to recapture the magic that made it a hit in the first place, or is this just a comeback that never should have happened? 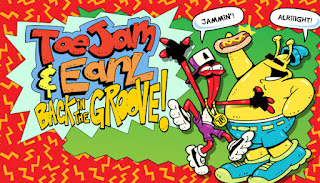 The original ToeJam and Earl was a cult classic for the Sega Genesis, effectively making a rather esoteric genre (roguelikes) into something fresh, accessible and entertaining for a wider audience with its irreverent sense of humor and clever design.  Its two sequels, however, were not quite as well received; the second reworked the concept into more of a puzzle-platformer, having the player search levels for numerous hidden earthlings to capture and navigate stages by bouncing on trampolines, swimming through underwater mazes and entering the occasional "Hyperfunk Zone" portal to reach new areas.  The third game, while it retained a randomized game mode and restored many elements of the first therein, put much more focus on its story mode, which was more of a collection-fest action game in the style of Banjo-Kazooie or Mario 64 than anything else, having the player collect keys to unlock worlds and complete various objectives in each level to earn rewards.  A few attempts to revive the series followed in the later years (including a proposed sequel on the Nintendo DS that failed to make headway with publishers), but only after securing funding through Kickstarter (and a publishing deal with Adult Swim Games that later dissolved) did Back in the Groove's development finally get underway.

Finally, four years later, Back in the Groove would be released, and to the delight of many fans, it was most similar in style to the original that made the franchise a hit in the first place.  Set on randomly generated levels, the player is once again tasked with avoiding enemies, uncovering the map and seeking out ten ship parts in order to complete the game, earning experience for each gift box they open, objective they complete and map square they uncover.  Earning enough experience and visiting a Wiseman allows the player to level up, which will raise three random stats and give them a new rank.  Along the way, the player collects gift boxes with a wide variety of effects - food items to restore health, slingshots and tomatoes to fend off enemies, "invisibility paint" to grant temporary reprieve from enemies, and temporary flight to name just a few of the positive effects.  Other gift boxes give negative effects, such as alerting nearby enemies to their presence, draining their health with a raincloud (that fires intermittent lightning bolts) or randomizing some or all of the gift boxes they've already found, forcing them to figure out what they do again.  A few mixups to levels occur too, with ice levels and dark levels providing new obstacles for the player to traverse.  Two-player split screen gameplay makes a return with both couch co-op and online play supported, though sadly the planned four-player support was scrapped owing to technical problems that couldn't be resolved before release (though it may be reintroduced in a later patch).

As before, the game's main antagonists are earthlings, with many returning from previous games, such as the killer ice cream truck, mad dentist and chickens that fire mortars, though a few new types appear as well (like the segway cops and guys on cell phones who continually walk into you).  Not all are hostile, however - some actually aid the player, such as the opera singer who will, for the price of a few dollars, follow them around for a short while and damage all onscreen enemies with her song.  The D&D players will let the player gamble for a chance at extra money, while Gandhi (yes, that Gandhi) creates a zone of peace around himself that prevents enemies from approaching, which the player can use to their advantage when under pursuit from tougher foes.  One can take refuge in sunflower patches too, which will make them invisible to Earthlings and give them a breather to plan their next move.

Notably, Back in the Groove also implements several elements from the sequel games too; the Hyperfunk Zone and Rhythm Matching minigames from Panic on Funkotron return and can grant bonus experience and money, and the player can shake various trees, bushes and houses to uncover hidden items (and the occasional boobytrap).  Latisha from the third game returns as a playable character; one of nine total in the game (six available at the start, with three more unlocked as playthroughs are completed), and each has a distinct set of unique abilities; ToeJam gets better benefit from hi-tops and spring shoes, for example, while Earl can regain health from food that will harm other characters.  Latisha deals extra damage with tomatoes, LeWanda can use coin meters at no charge, and Peabo can use the Icarus Wings for twice as long as anyone else (though as Icarus Wings are exceptionally rare, you may not get a chance to use this ability at all).

In short, Back in the Groove is a treat for fans of the original ToeJam and Earl on the Genesis; it returns the franchise to its roots while working in elements of its sequels, the odd style and sense of humor that became a hallmark of the series is definitely not lost, and it's overall just a fun, voluminously replayable experience in either single player or co-op.  I did hit a few minor bugs on the Switch version (mostly framerate hitching and lag), though a patch is due out soon that addresses these and other issues.  If you have twenty fifteen dollars and want an entertaining, quirky roguelike experience, pick up ToeJam and Earl: Back in the Groove and have some fun with a friend. 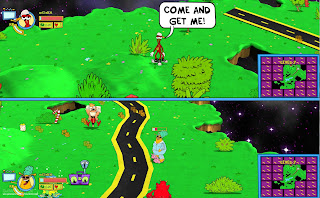 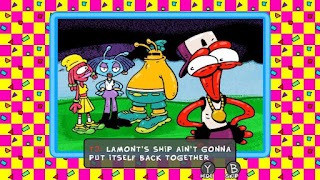