A sequel thirteen years in the making, Kingdom Hearts III is a title with a lot on its plate - a huge fan following, a convoluted storyline to try and wrap up in a single swoop, and an entire skipped generation all led to high expectations.  But does this long-awaited followup effectively tie together a web of spinoff games and emerge from the shadows with style, or does it just crash to earth with a dull thud? 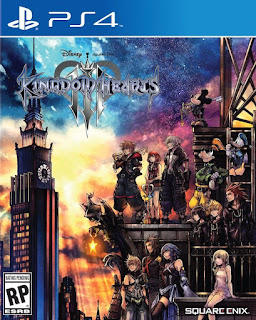 Kingdom Hearts III is the culmination of a thirteen-year gap between it and II, within which was stuffed about six full-fledged games, some browser game spinoffs, stage performances that expand on the plot, and a number of other things.  That, plus a lot of fans who bought Playstation 3s expecting it to come out on that platform and being let down when it didn't, meant the stakes were high; Square had to deliver something incredible or tarnish their reputation for years to come.

They certainly made every effort to do so, and this is perhaps no more evident than in the presentation.  Kingdom Hearts III is an absolutely gorgeous game, with the same fluid animation and expressive character models of its predecessors put into a fully-realized 4K gaming environment with realistic lighting, shadows and textures, and dozens or even hundreds of onscreen models with no visible slowdown whatsoever.  It's an awe-inspiring sight to see, and probably the single most impressive game I've played so far this generation from a visual standpoint.

The familiar Kingdom Hearts gameplay has been radically overhauled too.  While the overall format remains the same - the core party members of Sora, Goofy and Donald as well as world-specific guest characters taking on hards of enemies - there are a few prominent changes made.  First is the fact that all of the characters can be active on the field at once now - not just two others of your choosing - which greatly speeds up battles with mundane foes.  The AI is significantly smarter now, resulting in far less instances of your entire party dying off within moments and leaving Sora to face threats solo.  But the changeup is perhaps no more evident than in the movement mechanics.  While movement in the earlier Kingdom Hearts was relatively slow, with sluggish attack animations and awkward, floaty jumps, Kingdom Hearts III's can be more aptly described as combining elements of Saints Row IV and Prince of Persia.  You now run at a pretty staggering speed, can leap astonishing heights, automatically parkour up and over small ledges and narrow footholds, and reflective surfaces can be run on either horizontally or vertically, giving the player tremendous freedom of movement.  Even some elements of the 3D Sonic games are worked in, with Sora able to grind on rails to traverse between areas and lock on to aerial targets to quickly zip to them, allowing him to climb tremendous heights the likes of which have never been seen before in the series.  Basically, you feel less like a constrained JRPG protagonist and more like a superhero, which is quite a strange - but welcome - turn for the action to take.

In similar fashion, combat in Kingdom Hearts III has been massively reworked.  The game now integrates the crazier elements of 2 into the core mechanics.  Maybe a little too well, as Kingdom Hearts II's action feels downright restrained compared to this game's.  Sora's attacks feel much better integrated with the movement mechanics, letting the player efficiently attack enemies, dodge attacks, swap between targets and not get juggled for massive damage anywhere near as easily as in previous games.  Each Keyblade now has a secondary form and a complement of unique attacks, from a rocket-powered sledgehammer to a pair of pistols that fire homing shots to a wand that fires a barrage of lasers at foes.  In a mechanic borrowed from Birth By Sleep, the Focus gauge now fuels a ranged attack with third-person aiming and homing shots, giving an alternative option for enemies that like to dodge out of the player's reach.  The special attacks are better worked into the action too - after building up a small gauge by landing successive attacks, the player unlocks all manner of insane, over-the-top special moves that activate at the press of a button; some return from previous games, like Donald being able to launch fireworks or Goofy doing diving attacks to take out small groups of enemies, but the majority are completely new and frankly downright crazy.  The most prominent example of this are Attractions, wherein Sora summons up various carnival rides to attack his opponents and dishes out massive damage by playing minigames with them - a pirate ship that can be freely rotated and swung back and forth to clobber enemies,  a carousel that launches waves of energy with timed button presses, and a small spaceship that turns the game into a first-person target shoot to name just a few.  Each even comes with its own high score table, actively encouraging the player to use them whenever possible to rack up the damage and wipe out entire waves of enemies in an eyeblink.  It is fun to play around with these and shoot for high scores, though they do tend to get just a bit tiresome after the twentieth time you've seen them, particularly since combat in the game is a near-constant thing and the game hands them out to you so freely.  Still, Kingdom Hearts III's action is by far the best the series has had, and it reminds me more than a bit of crazy, smooth-playing character action games like Bayonetta.

Another series mainstay has also seen massive overhaul.  The Gummi Ship facet of the game has been reworked once more into an open world style of gameplay, no longer constricted to linear corridors full of enemies to fight.  In fact, it now feels slightly reminiscent of classic 16-bit RPGs, with random enemies appearing on the field (putting the player into a separate combat screen to fight them off), hidden treasures throughout each area (with many only being accessible after attaining certain upgrades) and unlockable waypoints that allow for fast travel between destinations.  One can now simply buy new Gummi parts too, though as in previous games, most of the best ones can only be found by fighting enemies and completing challenges.  I personally didn't enjoy it as much as 2's Gummi segments, but it is at least an interesting new take on a mainstay element of the series.

But of course, the major elephant in the room for Kingdom Hearts is its storyline.  III makes very little attempt to explain anything that's happening to newcomers and takes every previous game in the franchise into account, casually dropping terms, characters and events in with no explanation and little expository context.  Basically, if you haven't been scrupulously following the story through the various sequels, spinoff stories and supplemental material, you're definitely going to end up lost.  It's no real surprise that Square released "The Story So Far", a compilation of all of the previous games released, only a few months before III came out, so that people could get caught up and ready for what's on display here.  Still, it is well over 200 hours of gameplay to experience all that this franchise has to offer (even more if you do all of the side-content), so if you're going to take the plunge, you're going to need a lot of free time on your schedule.

What it comes down to is that Kingdom Hearts III is very much a sequel made for the fans, showing off more Disney worlds and Square Enix characters on the backdrop of a convoluted, fan-fictiony kudzu plot and cheesy anime tropes.  It might crumble a bit under the weight of nearly two decades of ongoing storytelling and fan expectation thereof, but the fluid and entertaining gameplay, amusing animation and jokes and a new take on almost every staple of the series make it an enjoyable game that certainly won't let down any long-time fan of the series. 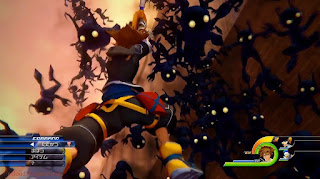 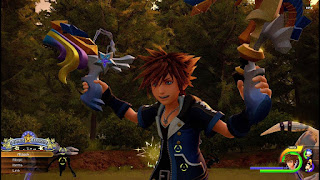