Released three years after the first game in the late era of the Playstation 2, Kingdom Hearts II was a long-awaited sequel to a cult favorite.  But did it prove to be a worthy continuation of the franchise, or was this just a misstep? 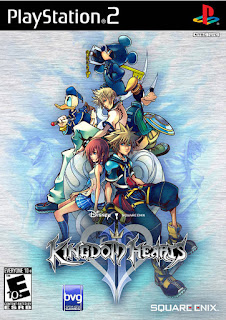 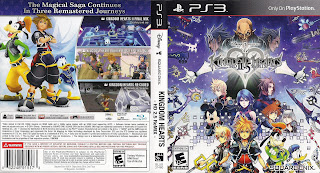 The original Kingdom Hearts is viewed by some as the last gasp of quality from the old Square before the buyout and restructuring as Square Enix; it effectively combined a Final Fantasy format with the fluid animation and creativity of Disney, and despite some clumsy movement and downright cheap boss battles, it was a fun and enjoyable game.  Naturally, it was also a big hit with two huge names behind it, so the sequels were inevitable; first a Game Boy Advance card-based spinoff (Chain of Memories) and then, a few years later, Kingdom Hearts II.

A few prominent changes crop up right out of the gate.  First is that the game now puts much more emphasis on combat than anything else, with large groups of enemies and boss battles being a near-constant element of the game.  Conversely, the level design has become much more streamlined and utilitarian - rarely more than a linear corridor to carry the player to their next destination, with very few puzzles or paths that won't be opened on the first visit (save for a small handful of worlds).  The Trinity element of the original (allowing the player to access new areas and treasures as the game progresses and they unlock more Trinity colors) is completely gone too.

Adding to this, nearly every scripted in battle in the game is now given some sort of gimmick - from defeating all enemies in a given time limit to defending an NPC to being able to commandeer certain enemy weapons for huge attacks that can quickly wipe out waves of smaller foes.  In addition, almost every foe now has a counterattack associated with them, which can be activated with a well-timed press of the Triangle button.  For some, this is simply an evasive maneuver (such as dodging behind the basic Nobody enemies), while for others it launches into something more akin to a full-blown Limit Break animation that lasts several seconds, doing heavy damage or stunning the enemy.  In addition, the player now gets new upgrades each time they win a fight, which can be anything from minor stat boosts to new skills to even spells; there is seemingly little rhyme or reason to when these occur, as even encounters with basic enemies can sometimes give upgrades that let the player radically change up their strategies.

Sadly, while this does at first give the impression that Kingdom Hearts II steps away from the somewhat clumsy combat of the original and branches into something more like a character action game, this is not really the case.  Sora's movement is still rather slow, with his attacks being sluggish, heavy swings and jumping being floaty and awkwardly delayed.  Moreover, any hit from an enemy puts the player into stun, and almost anything that makes contact in midair sends the player flying a significant distance back before they have any chance to recover.  This can be downright frustrating in many battles, especially as nearly all of the big bosses (and even a number of normal enemies) have lengthy, elaborate and fast-moving combination attacks that often make them invulnerable for the duration and can be quite difficult to avoid with your limited movement.

Not to say that you're completely constrained by the first game's mechanics, as there are several new elements in place to let the player even the odds.  First, the summons from the original game return, albeit now slightly more akin to Final Fantasy XII's summon system, replacing one or two of one's party members for a new one temporarily.  Each teammate now has a unique Limit Break too, consuming all of Sora's HP to perform a large attack that will usually destroy minor enemies outright and deal heavy damage to bosses.  Finally, early on in the game, Sora is granted the Drive ability, which runs off a unique gauge and lets him transform to one of several new forms that boost his stats, change his skill loadout and generally make him a much more dangerous force for a short period.  To name two of these forms: Valor form lets Sora temporarily dual-wield keyblades and grants him much swifter movement and attacks, while Wisdom gives him a ranged attack and free-gliding movement.  Several more are unlocked as the game progresses, as well as a secret form that greatly boosts his stats and agility but temporarily renders him unable to heal.  However, these are generally best saved for tough boss fights, as the Drive meter does take quite a while to replenish (by collecting orbs dropped from enemies) so it can't be abused too much.  Limit Breaks are similarly restrained; though the player can restore MP on their own with Ethers and it now regenerates on its own after a short while when completely emptied, relying on them too much can put the player at a disadvantage at a bad time.

Beyond the uneven and frustrating combat, though, the game still holds a lot of appeal for both Square Enix and Disney fans.  More familiar Final Fantasy faces show up, including characters like Tifa from VII and the protagonists of X-2 (as fairies) and even a cameo from Setzer of Final Fantasy 6 fame.  New Disney worlds show up too, with some more recent properties like Pirates of the Caribbean showing up as well as some relatively obscure ones like Tron.  A personal favorite is Timeless River, based on old Disney cartoons from the 1930s; Sora, Goofy and Donald's designs change to match and the audio even becomes somewhat muffled to mimic old sound equipment, fully immersing the player in the world's atmosphere.  Seeing all of these different characters in one big universe, interacting with each other, is definitely a treat if you're a fan of both franchises.

As in the first game, Kingdom Hearts II is replete with minigames too; these not only provide a nice diversion from the near-constant combat, but completing them often earns the player worthwhile rewards to power up their party for future challenges (and on lower difficulties, completing them all is required to get the best ending).  Gummi ship missions return too, though the overhaul they've been given is nothing short of jaw-dropping.  The original game's were rather slow paced and didn't provide much challenge (save for the optional missions in the HD remakes), but 2's Gummi Ship missions are good enough to be a game in their own right, providing a style of fast-paced, fluidly-animated action more than a bit reminiscent of Star Fox 64.  Each stage is replete with hidden enemies and secrets that unlock upgrades, and after they're completed once, missions are enabled that let the player try to collect as many orbs as possible or simply defeat enemies and avoid damage to pursue high scores, with rank plateaus granting new ship parts and other extras.  It's honestly extremely fun and was by far my favorite part of the whole experience; if they released the Gummi Ship element of 2 as its own standalone game, I'd probably buy it.  Hell, as a big fan of Star Fox 64, it's a little disheartening that one of the most worthy successors I've seen to that style of gameplay doesn't even bear the title.

Kingdom Hearts II of an odd case, downgrading its RPG elements in favor of a more action-driven feel, but without actually making too much of an effort to tweak the core gameplay to fit to that style; instead, they simply pasted a huge library of new abilities on top of the clumsy mechanics of the original to try and compensate, and while it does work to a degree, your rather limited movement and the overall high reliance on limit breaks and spammy counter-attacks (all triggered by pressing/mashing the Triangle key at the right moments) can get to be extremely frustrating, particularly in the later boss battles where a missed cue or imprecise movement can result in heavy damage or even immediate death.  But in spite of some rather ill-planned implementation of mechanics and having animation spam on a level comparable to Final Fantasy VIII, Kingdom Hearts II is loaded a lot of service for fans of both franchises it combines and plenty of content for die-hard RPG fans.  It's far from perfect, but if you're a fan of the series, you're going to play it at some point. 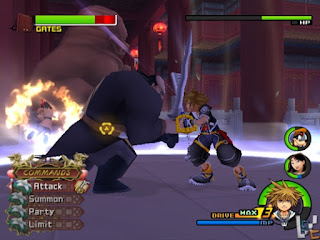 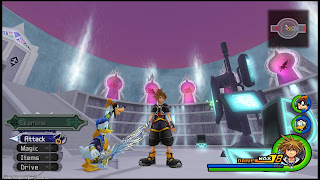