Ultima VI marked a new turn for the series, moving away from the simple visuals and gameplay to a more realistic, immersive world simulation.  But does it prove to be a bold step into a brave new world, or does Ultima VI just stumble over its own ambition? 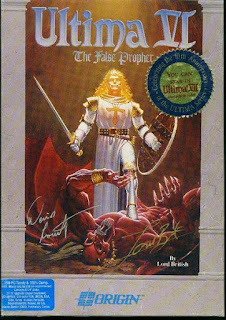 Two years after Ultima V was released came Ultima VI, and like the two games before it, the ante was upped once more for Ultima VI.  No longer content to settle for simple tile-based sprites and simple PC Speaker music, Ultima VI moved into a bold new era of VGA graphics and MIDI music to provide a colorful, fluidly animated and living world for the player to get immersed in.  The interface underwent a similar upgrade as well, now with a visual interface for character's equipment as well as icons for most everything - characters potions, reagents, equipment, and just about anything else the player can pick up and use all have unique inventory sprites, giving them a much more personal feel than simple text on a menu.  Each is nicely distinct too, allowing the player to quickly identify party members or needed objects with a minimum of fuss.

Ultima VI benefits too from a greatly simplified interface, taking the full-keyboard layout of previous Ultimas and condensing it down to about 8 commands.  For example, climbing ladders, boarding ships, drinking potions and opening doors are now condensed into a generic "Use" command.  In addition to keyboard hotkeys, Ultima VI was the first game in the series to support a mouse - anything that can be done with keys can also be done via point-and-click, with interface icons for things like using, picking up or entering combat mode and interacting with the world - perfect for aiming ranged attacks more quickly than with a keyboard, for example.

Ultima VI as a whole feels much less "video-gamey" than its predecessors, taking great pains to make itself feel more like a fantasy world simulation than a simple game environment.  There is a surprising amount of realism present in almost every detail of its design - doors now lock and unlock with specific keys, instruments can be played, cows can be milked, and even objects like functional sundials and light-casting lanterns and torches are present, giving the game considerably more atmosphere.  The world is much more seamless too, feeling like one large, contiguous map instead of having towns and dungeons feel like entirely separate worlds from the main world.  This also allows for some clever new puzzles; at one point the player must guide Sherry the Mouse through a tiny gap other characters can't enter in order to recover a key item.

There were a few stumbling blocks with this change, though.  As one can see from the screenshots below, the game's HUD is rather large and intrusive, only affording the player a 9x9 view of the world surrounding their character (even less so at night); this can at times prove to be quite the detriment, particularly when you have to reach an obscure area deep in a dungeon or well off the beaten path and have few or no identifiable landmarks to go off of.  While there are spells and items that afford the player a glimpse at the surrounding area, these tend to be costly to cast repeatedly, so they're not the most feasible of options to compensate.  Nor is making paper maps - an elegant solution for the grid-based 3D dungeons of the older games.  The sound design in the game is relatively limited, with very little in the way of sound effects and only a few music tracks that loop quite often, which gets just a touch annoying after one's been playing for a while.  Finally, while the game is much more vibrant and detailed than earlier Ultimas, its low resolution does work against it at times; one particular example in my mind is a rather involved quest at the middle of the game, wherein the player must find a nine-piece treasure map, then follow a route laid out on it to a destination.  A good idea, but a much less well-realized execution, particularly as the assembled map looks like this:

Some rough edges are to be expected with such a large and ambitious engine change, though.  And unlike most franchises that undergo such a thing, Ultima certainly did not lose sight of what it was - a dense, complex and engrossing tale that defied RPG norms of the era.  While it is easy to look at the cover art and think of Ultima 6 as a simple good-versus evil story (and indeed, it even seemingly starts out that way), it quickly proves to be anything but.  I won't give too much away, but suffice to say that Ultima 6 once again effectively turns its initial setup upside-down, and even puts a creative inversion on several founding elements of the entire series, once again crafting a tale that defied RPG norms of the time and even stands out today.  So, while it may not be my favorite Ultima to play, I cannot deny that it is still an excellent RPG and well worth a play in spite of its snags. 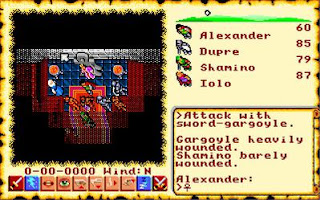 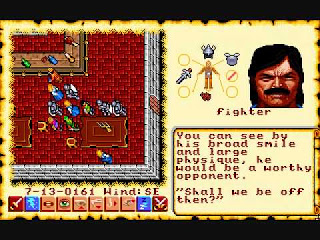 Developer: Origin
Publisher: Origin
Platform: MS-DOS, Amiga, Atari ST, Commodore 64, FM Towns, SNES, PC-9801, X68000
Released: 1990, 1993
Recommended Version: I have only personally played the DOS version extensively, but most other versions seem to be comparable (though being such a limited system, the Commodore version requires disk swapping every time one wishes to converse with NPCs or enters a new map area, which can get quite tedious).  The SNES version is a surprisingly faithful conversion, though somewhat scaled down owing to ROM space limitations and censored owing to Nintendo's policies of the time, removing all gore, references to killing, NPC portraits and changing the Gargoyles' appearances to be slightly less "demon-like".  The DOS version of 6 can also now be run in ScummVM with additional tweaks and improvements like a higher resolution and a less cramped UI, so that's the route I'd recommend nowadays.
Labels: ⭐⭐⭐½, 🎣, 1990, Full Reviews
Newer Post Older Post Home