Serpent Isle is a followup to Black Gate, released a year later and running on the same engine (a rarity for the series).  But does it too prove to be another worthy adventure, or is this truly where the series' decline began? 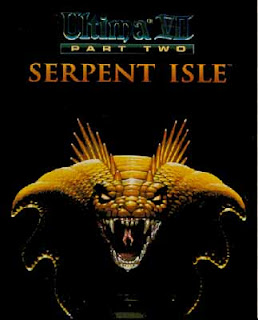 The eighth game in the mainline Ultima series and the twelfth overall counting spinoffs, Serpent Isle was dubbed as such because it reused the engine from the previous game (unprecedented for the mainline series, but not for spinoff games).  Also, despite being billed as "Part Two" of Ultima VII's story, it's actually the third, with Ultima Underworld II serving as an interquel between Black Gate and Serpent Isle and depicting the events that led to the Avatar coming to possess the Blackrock Serpent that proves a central focus of this game's story.

Not to say that Serpent Isle is a lazy game by any means; despite looking and playing much like its predecessor, the game has gotten a significant visual overhaul, with many new NPC sprites, a drastically different looking game environment and high-resolution digitized portraits for not just the Avatar (now with three selectable races), but just about every NPC in the game.  Scripted events are now a part of the game as well, with numerous in-engine cutscenes playing throughout the adventure and even an occasional cutaway to events happening far away from the player's location.  A lot of the sillier bugs from 7 (such as being able to steal by simply drag-dropping straight into one's inventory, or bake bread by throwing flour directly into ovens) have been fixed, making for a more polished game.  Some new hotkeys are added too, such as one that allows the player to instantly feed characters from any food they have in their inventory, saving them some tedious inventory digging and double-clicking.  The expansion, Silver Seed, also adds in a very useful item in the Keyring, which consolidates all keys the player collects into a single object that can be activated via a hotkey; it's honestly criminal this wasn't put into the game from the start.

Some downsides are present too, however.  The full party size is trimmed from eight to five, though as a result of this, the game does run significantly more smoothly than the original Ultima VII.  The world map also doesn't feel quite as well-designed, with large, empty plains dominating large portions of one continent and vast swaths of forest on the other, providing relatively little side-content for the player to see or interact with.  Serpent Isle is also a much more linear experience on the whole, with opportunities to visit side-areas or do quests out of order being relatively rare compared to previous Ultimas.  This is somewhat necessitated by its more tightly-packed environment and the heavily scripted nature of the game, but a bit disappointing compared to the likes of previous Ultima titles.

These problems only get compounded further in the second half of the game, where there is a noticeable decline in the quality of the in-game dungeons and only a small handful of NPCs to interact with.  However, this was not originally by design - evidence from leftover concepts shows that the game was to be much larger in scale; however, as Electronic Arts had bought out Origin before the game's release and insisted on a strict release deadline, Serpent Isle was unfortunately rushed and a large amount of its content was either stripped out for time or just never implemented.

Not to say that it's all bad, though, as Serpent Isle maintains the series' exceptionally high standards for narrative-crafting and leading the player on a constantly enthralling adventure.  Characters are all well-written and have a surprising amount of dialog, Serpent Isle is an exceptionally fun place to explore and discover the lore of, and even with all of its cut content, this is a dense game that's roughly twice as long as its predecessor. Optional content, though relatively sparse, provides a few clever moments like a pirate (of the seafaring type) who is running a computer out of a small shack and illegally downloading Origin games (making him a software pirate).  One subtle, but effective example of keeping the player invested comes right at the beginning; while the player comes loaded for bear with plenty of high-end equipment, a spellbook and the mysterious Blackrock Serpent, this all gets taken away quickly by a strange phenomena called a "Teleport Storm" and replaced with a number of odd objects.  However, one quickly discovers that the taken objects were not destroyed outright, but rather teleported elsewhere in the world, and that the items that were left behind have all swapped places with them.  Thus, the player can use said objects as clues to get their old stuff back and become well-armed once again.  It's honestly quite a clever lead-in to the game's major overarching side-quest, as well as a creative way of foreshadowing one of the central focuses of the plot.

Some other irritating elements crop up in the game's design, too.  One prominent example is the emphasis placed on key items, which there are far more of in Serpent Isle than in any previous Ultima.  Worse, losing any of them can potentially put the game in an unwinnable state, as they will come to an event and be unable to continue.  Carefully managing one's inventory, as well as keeping the Avatar's Strength high via training so that he can carry any key items he needs, quickly becomes a key element of the game.  There is no longer a general-purpose Resurrection spell available for the player's use, with the task of reviving allies now falling to a magical hourglass given to the player at the outset.  This is fine for the player themself, as well as their allies, but should a particular required NPC be killed at any point (whether through player action or simply being caught in the crossfire during battle with an enemy), this too can render the game unwinnable.  NPC schedules return too, though unlike the previous game's, NPC's actions throughout the day are scripted to a meticiulous degree - they'll sometimes wander all over town, which can make tracking them down to trigger a plot flag rather tedious.  Not to mention that if one wants to buy equipment or get training, they will have to wait for specific times of day for them to be at their jobs, which can mean a lot of waiting or sleeping to get the in-game time to that point (and even then, they won't always be there, as skipping a lot of hours at once can throw things off).

Still, despite its faults, Serpent Isle is debateably the last great Ultima game; its grandiose narrative, large scale, oppressive atmosphere and thoughtful design make it a downright breathtaking title, particularly for the early 1990s, and even today it's rivaled by few others in the genre.  We may never see it be fully completed as the developers originally intended it to be, but 60-70% of an incredible game is still an experience worthy of your dollar. 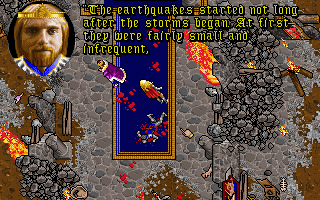