Ultima VII was the first game in the Ultima franchise to be a DOS-exclusive release, and the first in the series to be entirely mouse-driven.  But does it take advantage of the industry standard well and live up to its legacy, or is this the beginning of the franchise's downturn? 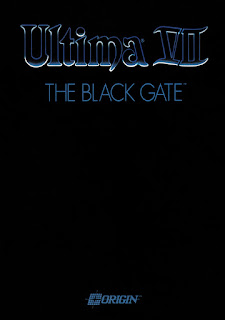 The box's design was a point of contention with Origin's marketing department.  Richard Garriott had to fight to get them to release a game with a plain black cover!

The year was 1992, the Nintendo VS Sega console war was under way, and it seemed like everyone in the industry was going out of their way to up the ante; technology behind games became just as much of a selling point as the gameplay itself.  Ultima was certainly no stranger to this, even then - starting from 4, it seemed as though every subsequent game required you to upgrade your computer to be able to play it.  But this was perhaps no more evident than with Ultima VII, which abandoned any attempt at being a multi-platform release with development solely focused on MS-DOS.

In this regard, the game certainly succeeds, vastly upping the ante graphically from previous Ultimas with gorgeous, high-resolution VGA art, world design that was no longer bound to a grid and a very minimal user interface.  Rather than having a large, intrusive HUD as in previous Ultimas, the entire screen was now dominated by the playfield, without even a health indicator readily visible on the main screen.  Complementing this, Ultima VII utilizes an entirely mouse-driven UI with only a few keyboard shortcuts for common commands like opening the save menu (S), opening one's inventory (I), opening the spellbook (B) or viewing a character's stat screen (Z).  Music and sound got a similar upgrade, with some surprisingly well-composed, if short, tunes complementing key moments and combat with enemies, and periodic taunting voice clips lending menace to the franchise's newest villain, the Guardian (voiced by Bill Johnson).  While there isn't a lot of either owing to storage limitations (low-density floppy disks still being standard at the time), what is there is used to very good effect.

The mouse interface does lend a simple and intuitive bent to the game, with formerly-complicated tasks like picking up items being greatly reduced in the number of steps required - rather than pressing G and clicking a space on the screen to Get an item, one can now simply drag and drop it onto their character (or their open backpack) to acquire it.  Double-clicking opens doors, activates objects and talks to NPCs, while casting spells is streamlined to simply require the player to click on the entry in their spellbook, with required reagents being automatically deducted from their inventory.  However, the switch from a turn-based game to a real-time one necessitated one significant downgrade, namely in the combat system; rather than being able to individually control your characters and adapt strategies on the fly, combat is now largely automated, with the player simply pressing C (or clicking the icon) to initiate combat and characters largely acting of their own accord.  The player can give them general commands (like attacking from range or going Berserk, which prevents them from fleeing no matter how injured they get), but that's about it.  However, as combat is mostly downplayed in the game in favor of puzzle-solving and storytelling, it's not an enormous loss.

What can be more problematic, though, are some particularly dumb quirks of NPC AI.  Your allies can occasionally hit other NPCs, each other (or even you) with stray attacks, which will cause them to become hostile and fight one another until one dies, which can be irritating, especially in towns where attacking NPCs will often bring the guards and a swift death at their hands.  Worse than that is the fact that critically injured party members will often flee, dropping items from their inventory as they go; especially problematic if they happen to be carrying a key item that you happen to need.  (For this reason, I only allowed the Avatar himself to carry important items).

Expanding on this, the game falls prey to the pitfall of many vast open-world games and has quite a lot of minor bugs and oversights, as well as an engine that struggles against the hardware it's working on.  At the time in particular (but even still in virtual machines), Ultima can be very laggy in some places with lots of objects or even lock up or crash entirely.  While some of these can be amusing (like seeing walls vanish, NPCs get stuck in rooftops or being able to stack objects to climb around on almost anything), there are just as many that lead to frustration, like getting too much money at the casino and causing the game to run out of memory, leading to a crash.

But of course, with the leap to a new engine and a new generation of gaming, Ultima loses surprisingly little on a storytelling front.  The world is as dense as ever, with tons of hidden secrets and areas to discover, books to read and hundreds of NPCs, each with unique dialog, to interact with as one unravels the main storyline.  There is even a surprising amount of faithfulness to previous games in the series; though the Virtues and Shrines and the three Ages of Darkness play almost no role in this game's story, they are frequently referenced in in-game dialog and lore, and one can even find the runes, visit the shrines and discover a number of artifacts from previous Ultimas throughout the world.  Honestly, half the fun I had with the game was spent just wandering the game world, revisiting memories of my past adventures as I made may way through the newest one; it really is rare to see a franchise with this much respect for its own past, let alone allowing the player to experience it firsthand.  This only becomes more prevalent with the official add-on, Forge of Virtue, which has the player revisiting Exodus's castle from Ultima 3 in order to complete a new quest.

Despite some limitations of this new leap in technology, and a somewhat buggy engine, Ultima VII remains one of the best RPGs ever made on the PC platform, or any other for that matter.  Stepping boldly into a new era of gaming while firmly keeping in mind what made the series a hit to begin with, Black Gate provides a dense world to explore, a great storyline to experience and a tremendous sense of imagination throughout.  The sheer amount of realism and interaction in the game was downright breathtaking for 1992, and it's still rare to see some of the things on display here in gaming today.  Well worth a look for any genre fan. 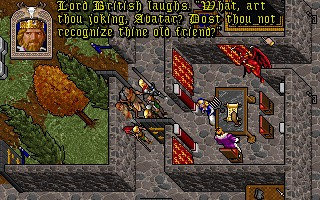 Developer: Origin
Publisher: Origin
Platform: MS-DOS
Released: 1992
Recommended Version:  While there is a SNES 'port' of Black Gate, I would strongly recommend avoiding that version at all cost; while the overall plot is similar (save for the prominent murders being changed to 'kidnappings'), its gameplay and design are massively stripped down, with nearly all of the dialog removed and the gameplay being changed to a poor man's Zelda with clumsy hit detection, cheap kills aplenty and scarcely a fraction of the features the PC version has to offer.  Stick to the original DOS release.