A direct sequel to Kingdom Hearts in story, though its gameplay takes a turn into the realms of the collectible card game and dungeon crawler genres.  But does this prove to be a competent and entertaining new take for the series, or does it just become too much of a mess to enjoy? Originally released on the Game Boy Advance and later remade for Playstation 2, Chain of Memories is the little-spoken-of direct sequel to Kingdom Hearts.  While it retains the action oriented gameplay and a heavy reliance on Disney charm, its overall design was much different, becoming something akin to a dungeon-crawler with some card game elements mixed in.

Yes, rather than having Square Enix's iconic intricately-designed worlds with puzzles and hidden secrets, Chain of Memories is now built around exploring a multi-floor dungeon.  Unlike many games of this type, however, the floors are not "randomly" generated per se; the layouts remain the same across playthroughs, but the player collects "room cards" through battles and inserts them into doors, with the cards they use determining what they find inside.  Each card they find is given a random number from 0 to 9, and its color determines what effect it will have on the newly-generated room - red cards generally give positive and negative effects to enemies found within (causing more to spawn, making them weaker, and so forth), green cards give a bonus to the player in that room (such as making their physical attacks more powerful or increasing the numbers of their combat cards temporarily) and blue cards give "loot" like treasures or a mid-dungeon save point.  These stay constant until the player leaves the current floor or rerolls the room by putting more cards into the door.  Said doors do have semi-randomized requirements, though, often requiring the player to put in a card of a particular number, a higher or lower number than specified, or a specific color of card, so there is still an element of randomness to what the player may potentially see each time.

Unlike the original game, Chain of Memories also has a separate combat system, with the player able to land an early strike on the enemy outside of battle to stun them and gain an advantage once the fight starts.  Combat unfolds in real time, though cards come into play here, too.  Each action the player takes is now done by playing a card - attacking with one's weapon (having to spend one card for each hit in a combo), casting spells, using items to replenish one's deck or restore HP, or summon familiar characters like Simba and Genie for a powerful attack.  Once one's deck runs out, they must switch to the Reload command and hold down the button to refill their deck, with the process taking longer each time they do so (up to three times).  Despite the card game element, however, the player is not reliant on "luck of the draw" to win battles - they are given all of their cards from the get-go and can switch between and use them as they wish.

Each combat card carries a number as well, once again from 0 to 9.  When a card is in play and the player (or enemy) plays a higher-numbered card, a 'Card Crash' occurs and the lower card's effect will be cancelled.  Similarly, if a higher-numbered card is already in play and a lower-number card is played, its effect is negated before it even begins and the card is wasted.  This quickly becomes a key part of the overall strategy, as having too many low-numbered cards can make it difficult to get any actions done at all, particularly in large-scale fights with many enemies attacking you at once; too often one can try to attack with a 5 card, only for an enemy clear across the field to play a 6 and stuff their entire combo.  Having as many higher-numbered cards as possible helps with this, as does the occasional 0 card; these are unique in that they will always lose in a Card Crash when played first, but will defeat any number when played second.  While less useful in mundane encounters with enemies where they can easily be defeated by another enemy in the group, they prove quite valuable in boss fights for shutting down their big attacks.  Defeating certain foes will also unlock special "enemy" cards, which the player can utilize during battle for a plethora of effects, such as extending one's attack range, becoming temporarily immune to attacks from the front or rendering their cards unbreakable for a short period.

Another element of strategy comes in with combos and Sleights.  In short, you press a button to "store" your currently highlighted card, and once three are stored, you press the button one more time to use all three of them in quick succession.  Sleights are essentially your special moves for the game, and many of them are carried directly over from Kingdom Hearts.  Activating these is a trickier endeavor - one must store three cards of a specified type and their numbers must add up to be within a specified range.  While both tend to do more damage than a normal attack, more importantly, the numbers on all three cards will be combined for the purposes of determining the winner of a Card Clash, making them a great way to beat stalemates or shut down particularly strong boss attacks.  Sleights and combos do have a significant drawback, though - the first card used in the combo will be unavailable for the rest of the battle, so relying too heavily on them can leave the player stranded at a bad time, especially in boss battles.

Of course, no card-based game is complete without a significant random element, and this comes in when the player is looking for new cards to build their deck.  While some cards can be earned as rewards from battle and by hitting random objects in dungeon rooms, the majority will likely come from Moogle Shops that can be placed in the dungeon with the requisite room cards.  Each pack contains five cards of a particular type (weapon, magic or item), or for 150 points, one can buy a pack with all three mixed in at random.  Naturally, you'll mostly get duds from this, but as it's the only (relatively) consistent way to get high-number cards, you'll just have to play the odds.  Unwanted cards can be sold back to recoup some losses too, which helps to reduce the grinding element.

Deck building is another key part of the game's strategy.  Each card has a Card Point value associated with it (higher-numbers and better effects costing more, naturally), and only by gaining levels can the maximum CP value for a deck be raised.  Therefore, the player must constantly balance the cards in their deck to accommodate upcoming challenges, but not leave their options too limited.  One thing that can help with this is that randomly-acquired cards have a small chance to be "Premium" cards, indicated by a separate listing on the card screen and a gold number on the card itself.  These cost significantly fewer points to put in a deck than their standard counterparts, but the drawback is that they can only be used once per battle unless used as the second or third card in a combo or Sleight.  Again, not something that one can rely on too much, but if you happen to get one that's just the right number and type you need for a Sleight, they can come in handy.

In short, Chain of Memories is an odd experimental outing for the series, making the controversial move of continuing the storyline directly from the first game's ending while changing up its familiar gameplay to something almost entirely new.  Once you adapt to its style, though, it proves to be a relatively entertaining, even if it doesn't have the same level of depth and strategy that most card-based games do and some of the boss battles are downright frustrating, with bosses constantly shutting down your attempts at doing almost anything and draining huge portions of your health with singular attacks themselves unless you happen to have a 0 ready to play at just the right time.  Not the Kingdom Hearts franchise's best game for sure. 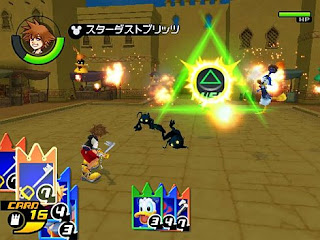 Developer: Jupiter
Publisher: Square Enix
Platform: Game Boy Advance, Playstation 2, Playstation 4
Released: 2004, 2008, 2017
Recommended Version:  Gameplay between the original GBA version and its Playstation 2 remake remains relatively constant despite the shift to a 3D perspective, though the gameplay is substantially more difficult in 3D as enemies seem to barrage you constantly in some battles, acting far faster than you can react and negating everything you try to do with "0" cards constantly.  The remake is more readily available nowadays since it's been included on the HD compilations for the series, but overall the GBA version remains more playable and less frustrating.