Vanillaware is a company known for their games' stunning 2D visuals, but prominent technical issues  and odd design decisions tended to lend them to an average overall reception.  Dragon's Crown was their attempt to create a hybrid of a beat-em-up and a loot-fest RPG, but does it prove to be a worthwhile game beyond its graphical appeal? 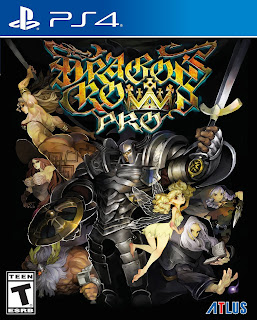 Founded in 2002 as "Puraguru" and renamed in 2004, Vanillaware is something of an oddity in that their games have primarily stuck with 2D graphics for the most part.  They have remained a fairly low-key company, putting out some hybrid-genre likes like Odin Sphere, GrimGrimoire and Muramasa: The Demon Blade, which saw both praise and criticism from gamers.  However, they did build up enough of a following in the west to warrant further releases for their games, and in 2013, Dragon's Crown, a game which had a concept floating around for at least fifteen years, would at last be finalized and released on both the Playstation Vita and the Playstation 3 by Atlus.

Dragon's Crown is arguably their most "mainstream" game, being a relatively straightforward beat-em-up with a lootfest bent to it.  In fact, it's more than a bit reminiscent of Capcom's Dungeons and Dragons games released in arcades with its heavy emphasis on co-op gameplay, temporary weapons to utilize and a large variety of enemies and loot to find throughout.  Between missions, the player also has the option to buy new abilities, identify and sell found equipment, repair equipment they've used during the mission, and even buy temporary buffs for their next excursion to make things slightly easier.

Players can travel through the various stages in groups of up to four, with the game supporting both online and couch co-op, and if no other players are available, NPCs generated from saved online data will join the player on their quests instead (unless they specifically set all of the empty slots to unavailable, which is necessary to complete a few quests).  There are a grand total of six characters in the game, running the gamut of fantasy archetypes.  The Fighter is the typical slow, but powerful short-range tank, the Amazon has relatively weak defense but high speed and can, after landing enough hits, enter a Berserk state that amplifies her damage tremendously.  The Dwarf is a more defensive character with an emphasis on taking hits and throwing around explosives to control crowds, the Elf is relatively weak at short range but wields a bow that can launch burning and poisonous arrows, the Sorceress summons powerful elemental spells, transforms enemies and can aid the party by summoning food, creating skeletal minions and bolstering their stats.  Finally, the Wizard serves as a more offense-based magic character, summoning fire and meteors, slowing down enemies and even having a spell that can instantly kill foes (though it obviously doesn't work on bosses).

The game's interface is a somewhat unique one - while the character is controlled as one would expect, using the thumbsticks and d-pad for movement/inventory selection and the buttons to perform various actions - they typically do not interact directly with the environment to uncover secrets or open chests.  Instead, the player must use the right analog stick (or touchscreen or touch pad, depending upon the platform) to move a cursor around the screen.  Simply moving the cursor over a hidden item is enough to reveal it (at which point the player's avatar can touch it to pick it up), but things like treasure chests, hidden switches and runes must be "clicked" on to activate them.  Adding to this, the player is always accompanied by two NPCs - the thief Rannie, who unlocks doors and chests for them (and gets better loot from them as his level increases), and the fairy Tiki, who points out hidden secrets from time to time.

Runes are another somewhat unique mechanic.  As the player proceeds through quests they will gradually earn more of them, though they can only cast "spells" with them at predetermined points, usually finding them engraved on background objects.  By clicking on runes in their inventory and ones in the environment in a specific sequence, they create "rune words" with special effects like making treasures appear, earning a temporary score bonus, bolstering their stats temporarily or even gaining an extra life.  Each adventure typically has a few of them, and though they can only be activated in specific areas, they can prove quite useful if the player knows the rune words.

Later in the game, one also gains the ability to take on many stages in a row, carrying over their current stock of lives and continues and risking losing all of their gained treasure for greater gains in the next stage.  Between stages, though, they can get an advantage at camp with a cooking minigame - by clicking on the numerous food items and spices on the screen and dragging them to the cooking pot or frying pan, they create food items that grant them buffers for the next stage; the more different dishes they successfully cook, the greater stat buffs they will gain for the next stage.  As a nice touch, some ingredients are added to the selection after defeating specific bosses, such as Gazer Eyes and Kraken Tentacles.

But of course, no mention of a Vanillaware game can go without speaking of its aesthetics.  Simply put, Dragon's Crown is a graphically gorgeous game, with hand-painted 2D backgrounds and cutscenes that show off a stunning amount of detail.  Character animation is surprisingly on-point too, with enormous, intricate character sprites that show exquisite levels of expression and a wide variety of animations for their numerous attacks, as well as a very distinctive style in general.  Dragon's Crown is also the center of controversy for its male-centric fantasy art style, with some characters (most especially  the Sorceress) noted for their very particular designs.  However, nothing in its dialog or setting is particularly sexist; the game just knows its audience and tries to cater to it.

Dragon's Crown is very likely Vanillaware's most successful game to date, and it isn't hard to see why as it provides intuitive, yet varied gameplay that proves to be quite entertaining, especially with a group of friends around to collect loot and fight bosses with.  It may not be the most deep or engaging game out there, but as multiplayer loot-fest action RPGs go, it's one of the best you're likely to find on a console. 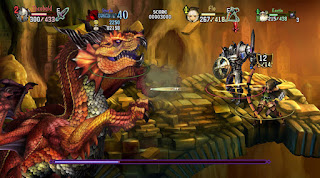 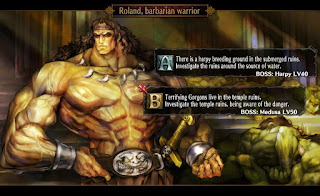 Developer: Vanillaware
Publisher: Atlus
Platform: Playstation 3, Playstation Portable, Playstation 4
Released: 2013, 2018
Recommended Version:  All versions of the game are essentially the same, just with some slight differences in the control layout to accomodate each platform's particular features.  Dragon's Crown Pro for the PS4, however, is currently the definitive release, with 4K graphics, a remastered soundtrack and some exclusive new downloadable content.  Once nice feature is that all versions of the game support both cross-save transfer (allowing the player to upload their characters to Atlus servers and download them on another platform to keep their progress and equipment) and even cross-play, so if you don't have access to a particular platform, you can still play with your friends online.