The World Ends With You

Jupiter and Square Enix unite to make a unique RPG that pushes the Nintendo DS to the limits of its potential.  But does this outing prove to be a success, or is this one experiment that never should have been conducted? 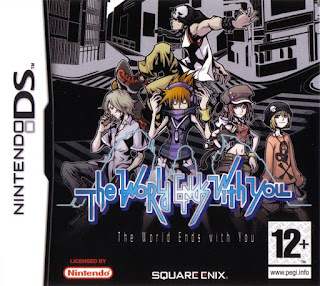 While Square Enix needs no introduction to any serious RPG fan (for better or worse), Jupiter is a name that isn't nearly as well-known.  Beginning operations in 1992, they've primarily created games for handheld platforms, and even then mostly puzzle games; their best-known ones are probably the Picross series and a few assorted spinoffs of Pokemon, including Pokemon Pinball and the Pokemon Mini series.  However, they did also co-develop Kingdom Hearts: Chain of Memories on the Game Boy Advance, and that game's relative success led Square Enix to try out a new game with them on the Nintendo DS.

That game was The World Ends With You, an RPG that goes out of its way to both defy convention at every turn and take full advantage of the capabilities of the Nintendo DS.  This is evident right out of the gate, as the game utilizes a bright, colorful 2D style reminiscent of graffiti and pop art in general.  The soundtrack follows suit, with a wide variety of genres and artists spanning rock, hip-hop and electronic music and giving the game a very modern feel.  Both are evident in every element of the game's aesthetic design, from its brightly-colored half-graffiti enemies to the weapons and attacks the player wields to its stylized environments, and lends much to the overall surreal atmosphere.

In similar fashion, the core gameplay defies a lot of familiar RPG tropes.  "Random encounters" are virtually nonexistent, with the player able to enter a "scan" mode and engage enemies on their own terms whenever they wish.  Additionally, once a certain point in the story is reached, the player can engage up to four groups of enemies back-to-back if they wish, earning substantial experience and item drop multipliers if they do; the downside, of course, is that one's health bar is not refilled between battles, so it's an all-or-nothing risk.  Difficulty is freely adjustable, with each different difficulty providing a new set of rewards from battle, and even the player's current level is too - reducing it will cause you to enter battles with less HP, but a higher chance for random drops from enemies to occur.  Again, a clever way to balance risk-versus-reward gameplay; you can't take nearly as many hits if you drop 20+ levels before entering, but you do have much better odds to get a particular item drop from an enemy if you do.

Shops fall under this rule too.  At first they will have only a basic inventory to offer, and many of the effetcts of items they sell will be obfuscated.  However, as the player purchases items from various shopkeepers, they will earn their trust and, through that, unlock new items for purchase and cause them to reveal effects of various weapon and armor; generally the ones they sell, but also on occasion ones players may have purchased elsewhere.

Food items also do not work as they tend to in most RPGs, as the player's health is automatically restored to full after any combat.  Instead, they offer two benefits - they grant an immediate "sync boost" (more on that in a bit), and once the item is fully consumed by fighting random battles, they often grant a permanent statistic boost to the character who consumed it.  However, the player can't abuse this too much, as they are only afforded a small total of 24 "bytes"; each food item a character consumes takes a certain number of these, and they can only be replenished by waiting 24 hours in real time (tracked by the Nintendo DS' internal clock).  Another nice benefit tied to the clock is that, if the game is left unplayed for up to seven days, each of the player's equipped pins will get an experience bonus, allowing them to gain at least some benefit from not playing the game constantly.  That said, the amount awarded does sharply fall off after the first two days, so there's not much benefit to leaving the game unplayed for longer than that.

Combat in the game strives to take advantage of the Nintendo DS's capabilities too, and does so surprisingly well.  In combat, each character appears on one of the game's two screens, with an avatar of each enemy on the field appearing on both as well.  The player controls both characters at once, with one being manipulated by either the D-pad or the four face buttons.  Neku, the game's protagonist, always appears on the bottom screen and is controlled via the touch interface, moving by dragging the stylus across the screen (larger distances for a quick dodge that makes him momentarily invulnerable).  Neku also has no inherent attacking ability, but over the course of the game the player earns, unlocks and buys numerous "pins" that grant him more actions during battle.  Each of these are performed by doing various gestures on the touch screen - dragging empty space to create flames, tapping to fire bullets, "scratching" to generate an earthquake effect that stuns enemies, and so forth.  While some are relatively tricky to use, the sheer volume of them lends quite a lot of variety to the game, and there is fun in seeing them all.  Moreso when one considers that many pins will "evolve" after reaching maximum level through repeated use, powering up and potentially earning new abilities in the process.

Further elements of this system unlock as the game proceeds, too.  The game encourages the player to split their attention between both screens in a number of ways; not the least of which being that both players share a health bar, so damage from enemies on one screen affects both characters.  But beyond that, mastery of this setup becomes an essential part of the game's strategy.  One clever way this occurs is through the "light puck" system - when a character successfully completes a combo, they'll get a damage bonus and pass the puck to the other character, who in turn can get a bonus of their own by completing a combo in quick succession and pass the puck back to the other character.  This allows for substantial damage bonuses over time, and becomes essential once powerful enemies called "Taboo Noise" begin showing up; they take minimal damage from the character that doesn't have the light puck.  Furthermore, each time the puck is passed, the players' Sync Rate will increase, and once it hits 100% (or a multiple thereof), the player is able to unleash a powerful super move that hits all enemies on the screen for massive damage.  Taking a page from Final Fantasy, these are each governed by minigames - either matching card symbols or picking cards in sequential order to rack up a damage multiplier and boost the drop rate for any enemies killed in the attack.  Once one's skill at the game reaches a point, they can release these moves numerous times in a single battle, quickly clearing chain encounters and showing quite a bit of visual flair, which is exceptionally satisfying.

Another unique element of TWEWY is that it's the only RPG I know of where fashion trends actively factor into the game's strategy.  Every item of clothing in the game, as well as most pins, are part of a particular fashion brand, and their effectiveness fluctuates depending upon the area the player is currently in; those that are currently in vogue get a significant bonus in that area (100%, 50% or 20% depending on their rank), while those that are out of fashion get a 50% penalty.  However, the player can influence these trends as well - if they wear items of a particular brand into battles and win them, they will influence the area's trends and can eventually make them more popular.  An interesting idea, if somewhat underutilized, as said trends usually only affect a particular screen or two; as you're generally constantly on the move, it only really becomes a substantial element during grinding sessions and clearing the occasional story mission.  Still, having a particular pin/fashion type trending before a tough fight can turn the tide of a fight, so it's good to know about.

All of this may sound a bit overwhelming, and at first, it is.  But the game does a relatively good job of easing you into the mechanics, introducing new concepts gradually and giving you essentially unlimited time to practice battles on your own terms to let you grow comfortable with things before moving on.  And as mentioned, the game's difficulty is freely adjustable, so if you're having particular difficulty with a boss, you can always raise your level back up or adjust the difficulty to win out and move on with the story.  That, plus a captivating story, fun characters and just the sheer, energetic nature of the game and its mechanics, make it an extremely addictive title that pushes you to keep going and see all it has to offer.  I honestly consider it one of the most unique and interesting games of both companies involved, and I'm a little shocked it didn't get more attention than it did during its initial release.  Well worth a look for anyone who thinks JRPGs have grown stale and are looking for something completely fresh and new. 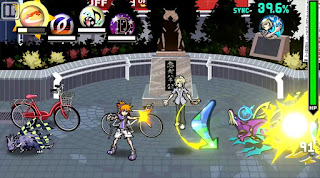 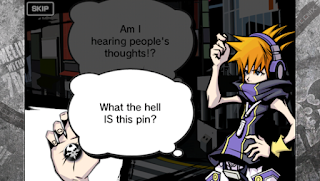 (Screenshots taken from the Nintendo Switch version of the game)

Developer: Jupiter, Square Enix, h.a.n.d. (Mobile/Switch ports)
Publisher: Square Enix
Platform: Nintendo DS, iOS, Android, Nintendo Switch
Released: 2007, 2012, 2014, 2018
Recommended Version: The Nintendo DS version offers the most "pure" experience, with the game clearly having been built around a two-screen setup and all of that system's unique features.  Subsequent versions had their gameplay reworked to utilize a single screen, with the secondary character essentially serving as an attack pin and combos being much easier to pull off (with Neku and his partner simply having to alternate attacks on a single enemy).  Still, both provide a lot of depth, content and challenge despite some significant changes, so if you don't have a DS available or you just don't want to switch attention between two screens, any of the later ports will serve just fine.  The Switch version does contain some exclusive content, though, so that may be the one I ultimately recommend among the retooled TWEWY ports (though I would recommend you play it in portable mode; using the joycons for combat was absolute hell on my wrists after a while).