Arguably Blizzard's first runaway success, Diablo took the CRPG and roguelike formats and reworked them into something amazing - a randomized, dark and moody adventure with a solid action bent.  But does this dark fantasy tale hold up today, or is the original Diablo just outshined by its followup games and countless imitators? 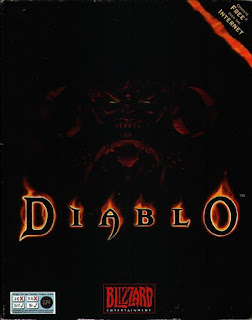 Blizzard is a company that needs no introduction to a modern gaming audience; they're arguably the single most instrumental company in keeping PC gaming afloat with standard-defining titles like Starcraft, Warcraft and the monstrously popular MMORPG World of Warcraft, as well as producing a number of multi-platform hits like Diablo III and Overwatch.  But while it's hard to imagine a gaming landscape without them nowadays, they didn't have the most auspicious of origins.  Beginning as "Silicon and Synapse" (and briefly known as "Chaos Studios" before adopting their current moniker), they were mostly known for console ports and a few original offerings like Lost Vikings, Rock n' Roll Racing and Warcraft: Orcs and Humans, which attracted a small fan following but weren't exactly regarded as top-of-the-line by any stretch.  Arguably their first big break came in 1996 with Diablo - a game that drew inspiration from PC classics like Rogue and its numerous derivatives while also taking advantage of new technology to update the genre to modern standards and give it a narrative to rival any other giant of the RPG genre.

Case in point, Diablo carries over the complex inventory and equipment system of most roguelikes, but rather than having an esoteric keyboard interface, it utilizes a simple, intuitive mouse-driven interface with hotkeys for common features (character menu, inventory, spells, etc).  Moreover, potions can be equipped to one of four slots that can be activated at the press of a key, allowing the player to more efficiently restore depleted health or mana without breaking off combat.  Definitely a convenient feature, especially as the game was fond of pitting the player against enormous hordes of enemies that could attack them at any time.

Diablo also features a class system, with the player able to select a Warrior, Rogue or Sorcerer character, each with their own unique abilities - the Warrior can repair his own equipment (at the cost of permanently lowering its maximum value), the Rogue can disarm traps and the Sorcerer can recharge staves at the cost of lowering its maximum number of charges.  However, other than their unique abilities, each class has little restriction on what spells they can use or what equipment they can wield - so long as they have sufficient stats to do so, they can use almost anything they find.

In addition to randomized dungeon layouts, fountains (generally raising one stat or ability at the cost of another) and loot drops, the game's overall structure is heavily randomized too.  Each time one begins a new game, they will be given a new set of quests to go through; for example, one game may pit you against the Butcher as your first major quest, while others may have to deal with Gharbad the Weak instead.  There are a total of sixteen random quests in the game, but you'll only see a small portion of them each time you play, which gives Diablo considerable replay value.  Moreso if one purchased the official (though non-canon) expansion called "Hellfire", which added in several new quests and even a new playable class in the Monk - a lightly-armored character that wields fists and staves but can do a "sweep" attack to hit multiple enemies in one swing.  Two more character classes are also in the expansion (Bard and Berserker), mostly functional but lacking their own sprite sets and requiring some .ini file editing to access.

Further adding to this, Diablo was among the earliest CRPGs to feature online play over Battle.net.  Up to four players could join a game and tackle the campaign or fight against one another in PVP matches, which was pretty innovative for the time.  However, as there was not yet a dedicated "player-hostile mode" nor any kind of anti-cheating method in place, public games quickly became rife with rampant cheating and player-killing, which proved a detriment to those who didn't have friends to play online with.

But whether one played with friends or alone, Diablo was a compelling experience not just on the merits of its gameplay, but on the strength of its storytelling and atmosphere.  The game contains quite a bit of well-written character dialog and lore, nearly all of it being voiced by professional actors like Paul Eiding and Michael Gough.  That, compounded by a gruesome, moody visual style and excellent atmospheric music, made Diablo a title that really drew the player into its dark fantasy world and got them invested, keeping them on edge as every corner they took through the winding labyrinth could pit them against a horrifying boss monster or a horde of enemies that could tear them to shreds in moments if they were caught unprepared.  A standout title for 1996 that holds up surprisingly well today, even if it is now largely overshadowed by its sequels. 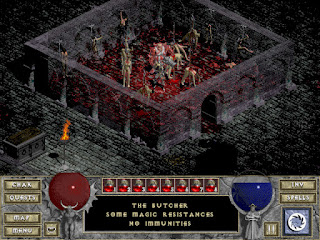 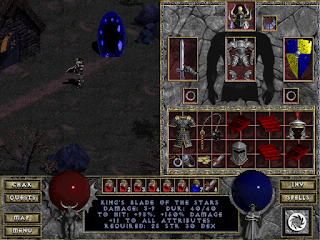 Developer: Blizzard North, Electronic Arts (PS1 port)
Publisher: Blizzard Entertainment, Electronic Arts (PS1 port)
Platform: PC, Mac OS, Playstation 1
Released: 1996, 1998
Recommended Version: The PC version is the one to get; not only does it support the expansion and player modding, but the controller interface for the PS1 version is exceptionally awkward and the low framerate does not make it a particularly fun version to play.