Quintet's third prominent outing on the Super Nintendo, Illusion of Gaia was something of a more linear Zelda title, putting emphasis on dungeon puzzles and enormous boss encounters on the backdrop of their usual moody storytelling.  But did they manage to make this one a hit too, or does it just pale in comparison to Actraiser and Soul Blazer? 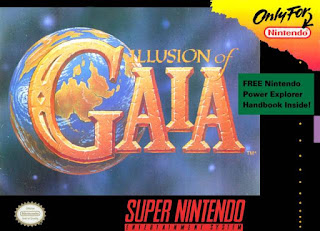 Quintet is a name known to several old-school gamers, particularly for one of the first games to get major attention in the west as one of the first big SNES titles.  That game was Actraiser - a combination of a sidescrolling action platformer and a city simulation.  Backed by a story about God and the devil (aka "Master" and "Tanzra" respectively owing to NOA censorship) squaring off with humanity's existence at stake.  That, paired with a moody soundtrack that still gets acclaim to this day, made it a very distinct and memorable, if not especially deep, title.  Similar themes would also carry over into their later game called SoulBlazer, though the game itself was more of a straightforward action title with some light RPG elements.

Illusion of Gaia is another game continuing in that same vein, though the journey is now a more down-to-earth and personal one.  Starring a boy named Will and his circle of friends as they are thrust into a world-spanning adventure by a strange series of events, the game takes interest in giving each of them a personal journey and development as the events of the story unfold.

However, despite the story encompassing several characters, only Will himself is actually playable.  At a glance, he seems to operate similarly to Link from the Zelda series, being able to slash his weapon in any direction and block attacks by facing them and spinning his flute with the shoulder buttons.  He is also said to have a "sixth sense", which comes into the game in a few ways - telepathy lets him communicate with various NPCs and objects, and he can also pull objects toward him with telekinesis while blocking.  A few others are unlocked as the game progresses, with Will being able to do a charged shoulder tackle, a tornado spin and a slide, which work both as attacks and as a means to bypass certain obstacles.

Character progression is fairly mundane too, though it features a somewhat unusual format from some RPGs; rather than gaining experience points, the player instead earns stat upgrades by clearing all enemies from a room - they'll either add one hit point to their maximum, one attack point or one defense point.  Defeating certain enemies will also clear obstacles on the map, and these are fixed each time.  Basically, one will want to defeat every enemy they come across to maximize their effectiveness in the later stages.  Collecting gems dropped by enemies will certainly help too - the game has a somewhat unusual "lives" system in place where, if the player dies while having a life in reserve, they will simply restart at the entrance of the current room.  Dying with no lives in reserve, though, will send them back several rooms.  For every 100 gems collected, one life is added to the player's reserves, maxing out at nine.

As the game progresses, Will also unlocks two alternate playable forms.  The earlier of the two is Freedan the Dark Knight, an enormous armored figure that wields a powerful sword and can launch a projectile attack known as the "Dark Friar" to trigger switches or damage enemies from afar.  The second, unlocked late in the game, is known as "Shadow", and has the ability to become a liquid-like form to sink through floors or simply avoid damage for a few seconds.

All of this sounds like a setup to give the game something of a Metroid-like feel, allowing the player to backtrack and find new secrets and areas as new abilities and forms are unlocked.  To a small degree, this is true; however, Illusion of Gaia has a very linear layout overall - very rarely is the player afforded chances to backtrack to previously cleared areas and find new things.  Usually, if one can find something, it's available as soon as they come to a new place and they should find it as quickly as possible, as if they leave that area they're likely not going to be coming back.

As one can imagine, this is a bit of a pain if you're trying to complete the game's overarching sidequest.  Throughout the game there are a total of fifty hidden Red Jewels, and collecting enough of them will earn prizes when cashed in at the Jeweler Gem - usually in the form of powering up one of your abilities or giving you small stat boosts.   In dungeons, these are usually in plain sight - most often found in prominent treasure chests - but in towns they tie into several different things, from NPC dialog to minigames to simply checking jars, bookshelves and background objects.  Collecting all fifty and talking to him one last time will unlock a bonus dungeon and boss that serve as a small callback to Soul Blazer, though no additional rewards are unlocked by completing it - not even a stat boost or an extended ending.

But while Illusion of Gaia's gameplay and design has a few rough edges, one cannot deny that Quintet once again plays to their strengths in its aesthetics.  The visual style of the game is downright gorgeous, with vividly colored, imaginative takes on real-world locales and some downright gorgeous animation, particularly on the main character.  Character designs themselves are provided by Moto Hagio - a relatively unknown name in the west, but a prominent shojo manga artist in Japan (though fans of obscure '90s anime releases may be familiar with the dub of "They Were Eleven").   And of course the game's soundtrack is phenomenal, sounding less like a Super Nintendo game and more like a full orchestral score, telling the tale of the fantastic journey the protagonists face.  Both of these add tremendously to the game's charm and atmosphere, taking what would be a good-but-not-great video game and punctuating the writing to turn it into something truly captivating and memorable.

In short, Illusion of Gaia is something of a forgotten classic for the Super Nintendo.  Its gameplay draws many cues from the Legend of Zelda series and executes them in a competent if somewhat underdeveloped fashion, while its storytelling and atmosphere rank among the best in gaming even today.  Its well-written characters, dark themes and yet overall uplifting feel make it into a truly captivating journey.  It may almost never be mentioned in the same breath as games like Link to the Past, Final Fantasy 6 and Chrono Trigger, but to me at least, this one stands as one of the greatest the Super Nintendo had to offer and one of my favorite games of all time.  It really is a crime that this one hasn't gotten any kind of official re-release on any download services or microconsoles. 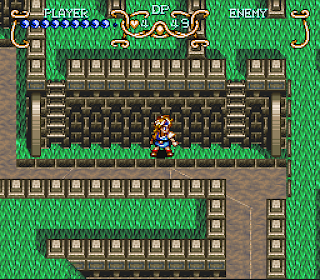 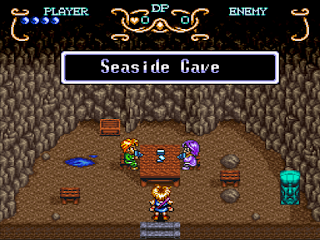