Released a few years after the original game, Costume Quest 2 has its protagonists return in another silly, halloween-themed adventure.  But does it prove to be a worthy sequel to the original, or does it feel like a cheap cash-in?

Costume Quest 2 marks Doublefine's second entry in the series (and to date, the last).  But despite being separated by a few years, not a whole lot has changed up between the two games.  The visual style and gameplay of the game remain relatively consistent, as does the central theme of Halloween and trick-or-treating, though with a few new twists for each.

The most prominent change are the ability cards, which now operate much differently than in the original game.  Rather than being equipped on each character, the player now picks a deck of three which can be utilized in a battle.  These have a variety of effects, from buffing the party to fully healing a single party member to doubling one's attack damage for a few turns.  Once one is used, the player must then go through a few battles (varies per card, but usually 2-3) before that card can be used again.  Candy is no longer just a currency, either - one can also consume some of their collected candy outside of battle to heal their party between fights (though as health-restoring drinking fountains are rarely far away, this ability is of dubious value).

Combat in the game is expanded upon too.  At its core it remains much the same - a turn-based RPG with unique abilities afforded to each costume that can give the player an edge in certain situations.  A few new twists come in the ability to purchase costume upgrades to power up a costume's innate ability - the Clown costume's ability will restore more HP after an upgrade, for example, while the Thomas Jefferson costume's attacks will ignite enemies for extra damage each turn.  After a certain point, the ability to do two attacks per turn is unlocked as well, with both having an associated timed button press.  There is something of an elemental system in place too - certain costumes will get a small bonus or penalty against some enemy types (about 20% or so) while enemy attributes can similarly be strong or weak against the player's.  While not a huge difference, it can turn the tide of a battle if the player is well-prepared or underprepared for encounters in a particular area.

Costume Quest 2 also features a completely different set of costumes from the first game's, each bringing a new set of abilities to the table both in combat and out.  The Wizard costume, for example, does "splash damage", dealing a small amount of damage to all enemies on the field with each attack, and outside of battle can light up dark areas to allow the party to pass through (or see hidden objects).  The Thomas Jefferson costume in particular sees a lot of use, with its field ability (Diplomacy) frequently being required to convince NPCs to help the player.  Some also have fairly involved side-missions associated with them, such as the wolfman requiring the player to follow tracks over a fairly large stretch of the game world before it is finally unlocked.

As with the first game in the series, Costume Quest 2 is a game built around hidden secrets and achievements.  To that end, each area has quite a few hidden items to find, cards to unlock and costume upgrades to purchase.  Some are definitely geared toward a more dedicated audience too, including one for using the Candy Corn costume (basically dead-weight - it does nothing but tank damage) in every single fight throughout the game.  Some grinding will also be required for things like honking the Clown costume's horn 1000 times and buying every single upgrade and card available, and if you are going for the candy corn related one, you'll probably want a few extra levels on your side too.

But whether you're an achievement collector or just an RPG fan, Costume Quest 2 is another worthwhile title.  While it doesn't quite have the same level of polish as the original, it's still an accessible, relatively short adventure that provides a lot of laughs, particularly in the Halloween season. 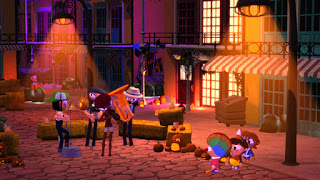 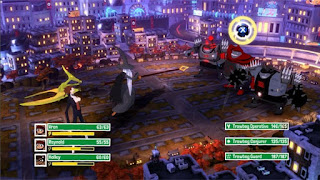