Ys Seven was a revival for the franchise in two ways, bringing the franchise newfound recognition in the west after nearly a decade of obscurity and for introducing a new, party-based style of gameplay.  But does Ys Seven mark the return of a worthy franchise, or does it change too much to be called Ys anymore? 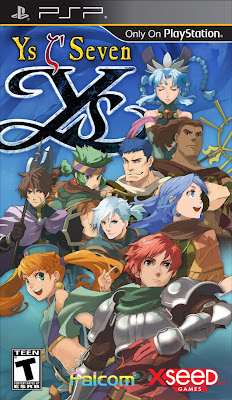 Ys Seven was the first of three Ys games to be released on the PSP, breaking a dry spell of Ys games that lasted quite a while, the most recent releases before it being a low-key PS2/PSP release of VI by Konami, and going even further back, the most recent release before that were the Turbografx-16 ports of Book I and II and Wanderers from Ys (easily the franchise's least popular game).  So, in a way, it was this game that spurred the franchise's revival in the west and led to a long line of remakes, rereleases and ports that continues to this day across multiple platforms.

What many found, however, was a significant change-up to the series format.  Ys Seven was the first to break away from the solo adventure style of gameplay that Ys had become famous for and instead introduced a party system - rather that one, the player now commands up to three characters at a time, and is able to swap between them on the fly at the touch of a button.  Doing so was more than just a gimmick, though - it was a key part of the game's strategy.  Each character had one of three different weapon types (piercing, slashing or striking), which most enemies were resistant or weak to to varying degrees.  Heavily-armored foes tended to be resistant to blades but would take damage from blunt force, for example, while quick-moving enemies (especially insects) were more vulnerable to piercing attacks.  In addition to this, characters the player is not actively controlling would take drastically reduced damage from enemy attacks, so a viable strategy against bosses was to simply swap characters at the last moment if they were in the path of an attack they couldn't avoid to have that character take less damage overall.  In addition, enemies now have a "stun bar" as well - basically, landing enough attacks on an enemy will stun them, leaving them temporarily vulnerable to all attack types and taking extra damage from any that land (an important tactic against tougher foes, particularly bosses).

Another new mechanic is the ability to block attacks for reduced damage - formerly, the player's only real option was to avoid attacks entirely, which is still doable via the dodge button.  However, guarding has its benefits too, not only serving to reduce damage but tying into another mechanic called "Flash Guard".  Simply put, blocking an attack at the last moment will completely negate the damage from that single attack, give a significant boost to the skill and Extra bars (more on those in a moment) and upgrade all of the player's attacks to critical hits for a short time; however, if they miss the timing, the player will take a critical hit from that attack, so there is an element of risk involved with this as well.

A further changeup comes in the game's skill system, which is unlike anything seen before in the Ys series.  Characters now get new skills that can be assigned to four hotkeys and used via a combination of a shoulder button and one of the four face buttons.  These generally come in the form of attacks with properties like launching the enemy into the air or dealing multiple hits, but some also serve as buffers, temporarily boosting a character's stats or weakening an enemy's. Landing normal attacks will fill the gauge needed to use these moves, and repeated uses will level them up, giving them more effectiveness.  However, these skills are tied to equipping particular weapons the player purchases, so once a player gives up a particular weapon for another, they may find themselves losing access to a particular skill.

Another new addition is the "Extra" skills; operating somewhat similarly to the Limit Breaks from the Final Fantasy series, these are super attacks unique to each character that can only be performed once the Extra bar is filled.  Once it is, pressing a button will cause that character to pause time and unleash a powerful sequence of attacks, inflicting heavy damage and stun on whatever they hit - usually enough to kill generic enemies outright and put a big dent in boss monsters.  The bar slowly fills as the player lands attacks and special moves and can generally only be used with a fairly long gap between, preventing the player from abusing it too much.

Ys Seven was also the first in the series to introduce a crafting system.  Each enemy defeated, as well as numerous farming poitns located on each map in the overworld and in dungeons.  Collecting enough of these can cause the player to craft new weapons and armor (and in turn more skills) and get various powerup items at a reduced price over simply buying them from the store.  While ultimately nothing too elaborate, I do commend them for adding this mechanic to the game without subtracting too much from the action-driven nature of the Ys franchise.

Subquests are a more substantial part of the experience now too.  As one might expect, these do often tie into the item collection element of the game - often requiring the player to defeat a specific enemy or collect set numbers of a given ingredient and turn them in for a reward.  These generally don't give amazing rewards (usually accessories one can find a shops), but they don't require a great deal of effort either, so it's usually worth it to take a few minutes out and pursue them in order to save some cash.

In short, Ys Seven was a new turn for the franchise, turning it into a party-based action RPG slightly reminiscent of titles like Secret of Mana.  However, its crisp controls and overall fast pace remain intact despite this changeup, and as a result it's still a fun game to play.  It may turn off a few long-time fans of the series, but those in look of a competent, enjoyable adventure with a charming atmosphere will find a lot of things to enjoy with Ys Seven. 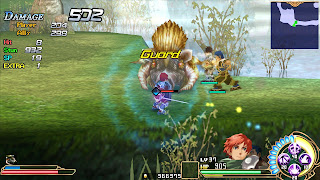 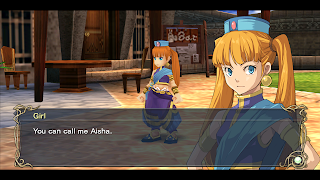 Developer: Nihon Falcom
Publisher: Nihon Falcom, Wangyuan Shengtang, XSEED Games
Platform: Playstation Portable, PC
Released: 2009, 2010, 2017
Recommended Version: The PSP and PC versions have virtually no differences between them, obvious technical differences aside.  I would say the PC version is the better one to visit nowadays, though, as it is a very good port, supporting a higher framerate and even 4K support.