The followup to Blizzard's smash hit Diablo was four years in the making, adding numerous new classes, features, new environments and a massive upgrade in production values.  But does Diablo II step out of its predecessors' shadow, or is this just a standard sequel that amounts to little more than an easy cash-grab? 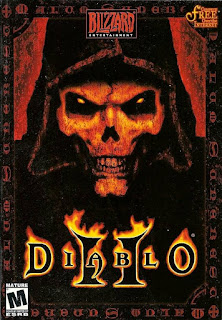 Diablo II is a game that remains well-regarded among PC gamers to this day, often being cited as one of the finest examples of the overhead action-RPG genre.  It certainly isn't for nothing, either, as not only does Diablo II make efforts to improve upon its predecessor's design in almost every way, but it introduced many staples of the genre that persist to this day.

The first change you're likely to notice upon starting is that Diablo II moves at a much faster pace than its predecessor.  While the first Diablo used its slower pace to build tension and a sense of dread at the looming hordes of enemies in the darkness, Diablo II goes for a pure action feel, with enemies frequently pouring into the screen in droves and the player having to react just as quickly to keep them under control before they become a problem.  That, compounded by frequent boss monsters (both scripted and randomly-generated) which can easily flood the screen with fire, ice, poison and other nasty things, makes health and quickbar management an indispensable part of the overall strategy.

The class system in the game is massively overhauled from the first too.  Rather than having three characters with only a single unique skill and some stat levels to differentiate them, Diablo II has a grand total of five (seven in the expansion), each with their own unique equipment choices and skill trees that have virtually no overlap with others.  Barbarians are the nearest equivalent to the original game's Warriors, though they also utilize a variety of special attacks like a jumping stab, a spin slash and a number of buffing totems and war cries to aid the party.  The Sorceress' three skill trees have her specializing in fire, ice and lightning magic to varying degrees, while the Amazon is a ranged fighter that utilizes bows, crossbows and even thrown javelins.  The Necromancer is a novel new class that focuses on poisoning enemies and raising fallen foes to fight for him, while the Paladin focuses playing more defensively with skills that focus on buffing the party and dealing heavy damage to individual targets.  The Assassin is a class based around setting up traps and fighting in close quarters, while the Druid can become a powerful werewolf or werebear and summon some elemental abilities of his own (mostly in the form of tornadoes and volcanic rocks).

Further compounding this are a staggeringly large amount of new weapon types, unique weapons and armors, and some new (at the time) novelties like Set items and Slots.  Simply put, set items grant significant bonuses to the character wearing them, but only if multiple or all of the items in the set are worn; equipping all four parts in the Arctic Gear set (Armor, belt, gloves and bow) will give a bonus to strength, life and immunity to Freeze status.  Slots, on the other hand, can occur on any piece of equipment and can be fitted with gems that grant either bonuses to attack or defense.  Putting a ruby in a slotted weapon will give it additional fire damage, for example, while putting that same ruby in a piece of armor will give fire resistance instead.  The expansion adds another new element to this in Runes; while they do grant bonuses on their own, putting particular runes in an armor in a set order will create a "Rune Word" that gives a substantial bonus to that piece of equipment.  For example, adding Ral, Ort and Tal runes in that order will give the Ancient's Pledge bonus to a shield, giving it significant bonuses to defense, elemental resistances and mana replenishment when the player takes damage.  All of these things further add to the game's depth and strategy and quickly become essential to surviving on the higher difficulties, particularly in Hell mode where elemental damage is at an all-time high.

Diablo II was also among the earliest examples of its genre to implement a crafting system, this time in the form of the Horadric Cube.  While commonly used to combine health and mana potions into Revuvenation potions (which restore both) and combine gems together to create higher-grade gems which grant bigger bonuses, it also serves to reduce inventory clutter in a number of ways.  Combining three perfect gems and a piece of magic equipment with it will reroll the enchantments on that equipment, while combining two quivers of Bolts will create a quiver of Arrows and vice versa.  Various combinations of runes and gems will also create stronger runes, while specific runes and magic armor will grant higher-grade versions of that armor.  Basically, it works both as a useful utility to reduce inventory clutter and as a means to further customize your character's loadout, though with a heavy reliance on random chance for most recipes.  An elegant way to add further to the game's strategy and replayability.

Perhaps the most significant shortcoming of the original game - its lackluster online experience - has been addressed in Diablo 2 as well.  Players can form parties of up to eight online in both "Open" and "Closed" realms, with the latter having characters stored server-side to address cheating and player hacking.  Additionally, players can now only turn hostile within towns, making unwanted player killing a less frequent occurrence.  Those interested in competitive play have options too, playing either on competitive Ladder games or even in Hardcore mode, where a single death will make that character permanently unplayable (though the player has the option to let others in the game loot their corpse for items if they choose).  Though the game has been overrun by spam bots in recent years and cheating is still a frequent occurrence despite frequent crackdowns on it, it is still reasonably easy to get together a group of players in a short period of time and play the game.

In short, while Diablo was Blizzard's first big hit and defined many key elements of action-RPGs with roguelike elements, Diablo II remains the gold standard for the genre to this day.  While it loses the dark, brooding horror atmosphere of the original, it gains much in overall gameplay design and strategy - the sheer volume of items to find and craft, character builds to experiment with and the vast scope of the game make it endlessly replayable, and its polished gameplay makes for an intense, fast-paced experience that will provide a ton of fun for you and a group of friends.  A true PC classic. 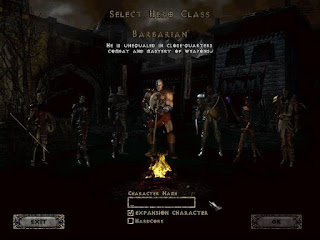 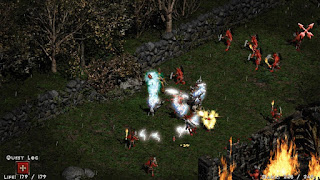 Developer: Blizzard North
Publisher: Blizzard Entertainment
Platform: PC, Mac OS Classic, macOS
Released: 2000
Recommended Version:  I have only personally played the PC version, but I imagine the game is similar across all platforms.  If you wish to play online today, however, you may want to look into playing it in a virtual machine program that supports screen scaling, as the game is fixed at 640x480 or 800x600 resolutions and using third-party resolution mods may get you banned from Battle.net servers.
Labels: ⭐⭐⭐⭐, 👑, 2000, Full Reviews
Newer Post Older Post Home