Ultima returns two years after its groundbreaking fourth entry with a game that puts some interesting moral quandaries into its narrative, polishes up its gameplay and amps up the difficulty.  But does Ultima V once again prove to be a great leap for the series, or were all of these changes just ill-advised ones? 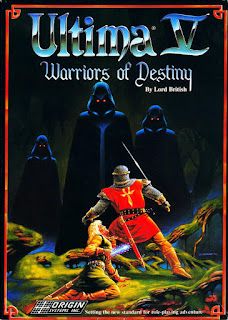 Ultima IV is a tough act to follow; widely regarded as one of the most important RPGs ever made, it was one of the first to contain a fully-featured dialog system that was integral to solving the game's numerous puzzles by cross-referencing NPC dialog to gather clues.  The sheer amount of text in the game could rival a short novel in density while sacrificing surprisingly little in the way of gameplay - Ultima IV was still a very lengthy, involved RPG that could take days, if not weeks, to finish the first time through.  But more than that, it required the player to be a good person - stealing, killing and other evil acts would only lengthen the time required to complete the quest, if not make it outright unwinnable.  All things which, in various ways, made Ultima IV a truly unique and immersive experience.

Ultima V had some big shoes to fill, but Origin proved that they were nothing it not up for a challenge.  The dialog system returns here, though in a somewhat more polished form - NPCs now have more consistent grammar and wording, and there are surprisingly few "generic" NPCs in towns - aside from the respawning guards, virtually every character one speaks to is unique and has their own set of dialog, adding much to the game's atmosphere.

The premise of the game works into this as well, with a much darker tone overall.  Essentially, Britannia's longtime ruler Lord British has disappeared, and in his place the tyrannical Lord Blackthorn has taken the throne, turning the eight virtues into oppressive laws and twisted mockeries of their intended function (for example, the law of Sacrifice reads "Thou shalt give half thy income to charity, or thou shalt have no income" while Compassion reads "Thou shalt help those in need, or thou shalt suffer the same need").  As a result of these, the eight towns - formerly bastions of virtuous people - are now fraught with danger as oppressive guards terrorize the populace and Lord Blackthorn's spies hide among them, making it considerably harder to get clues from townspeople.

Befitting this, Ultima 5 is a much tougher game than its predecessors too.  While the Karma system is somewhat relaxed from Ultima 4 (you'll still get docked for obvious wrongs like stealing and killing, but you are no longer punished for running from battle, for example), it still proves to be important to keep it high - most members of the resistance won't trust you if you have a bad reputation and thus won't give up important clues.  Lost Karma is considerably harder to build back up - though you can free enslaved people or donate money to beggars, these only get you so far as there are a finite number in the game and they won't respawn.  Your absolute last resort is to donate large amounts of gold at the eight shrines to raise your karma back up, which comes at a cost of 100 gold per point.

Combat in the game fits this rule too, with enemies attacking the player in staggeringly large groups, enemy ambushes at camp being more common than in 4, and status-casting enemies becoming much more common.  By far the worst offender are Daemons - they can cast Fear, rendering party members useless, and take tons of damage to bring down - and Dragons, who can charm party members and summon Daemons.  Worse, dying in battle causes party members to lose gained experience points, which, should they drop below a level threshold, they will have to re-level up to get back up to speed - not the easiest task when the level-up event occurs randomly when one rests, which can potentially expose your to even further danger.

Some elements of realism add to the challenge too.  The player must now purchase ammunition for most ranged weapons in the game, which makes relying on them heavily an expensive endeavor.  Mixing spell reagents incorrectly can cause a backfire that damage a single player or even the entire party, and the game now utilizes runic script for various signs and, at one point, even as a copy protection mechanism as necessary passwords are only given in it.  Even towns themselves aren't safe havens as in most RPGs - not only can guards shake you down for money, but the three Shadowlords will frequently visit them, which can cause the townspeople to attack you or refuse to speak to you for any reason until they leave.  The Shadowlords themselves are quite nasty too, being near-indestructible opponents who can only be killed in the course of completing certain puzzles, so it's generally not worth it to even stick around a town if one is present at that time.

A nice addition in this regard is the fact that one can simply purchase ships now instead of having to find ones that randomly spawn (which could take an irritatingly long time in earlier titles).  In addition, two new types of vehicles are added - skiffs, which can sail over shallow waters and up narrow canals (but cause the player to take damage every turn in deep ocean) and the magic carpet, which lets the player float over rivers and rough terrain, but more importantly, lets them move twice as fast as most NPCs, making avoiding guards and such far easier.  The moonstones are now a more useful tool, as the player can now dig them up and bury them somewhere else, causing the moongate to appear at that location instead when it matches the moon phase.  This proves to be quite useful, particularly toward the end of the game where you'll be braving the hazardous underworld beneath Britannia and will frequently have to make trips back and forth to resupply.

In the end, Ultima V is a logical step up from the previous game in many ways, adding more features, realism, challenge and depth while taking the storytelling and atmosphere in a much more dark and moody direction.  While not quite the revolutionary title that Ultima IV was, V upped the ante on an already great game, and it mostly pays off - though the challenging elements can be frustrating to less experienced RPG players, the adventure is once again a very worthwhile one if they are willing to put in the time investment and see it all the way through.  Another highly recommended game in the legendary Ultima series. 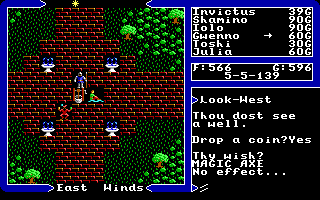 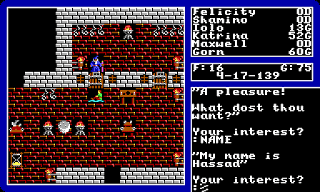 Developer: Origin Systems
Publisher: Origin Systems
Platform: Amiga, Apple II, Atari ST, Commodore 64/128, MS-DOS, FM-Towns, NEC PC-9801, Sharp X68000, NES
Released: 1988
Recommended Version: I can't speak for most computer versions, as I'm only really familiar with the DOS port.  However, I can safely say that the NES version should be avoided at all costs; it's a stripped-down, butchered version of the game with a fraction of the dialog in place, a ten second music loop and slow gameplay that is generally unpleasant to endure.