Based on the anime series by Trigger, Little Witch Academia: Chamber of Time carries the energetic ambiance of the show into the realm of gaming.  But does this prove to be an action-RPG experience worth visting, or is this just another mediocre licensed title you can safely skip? 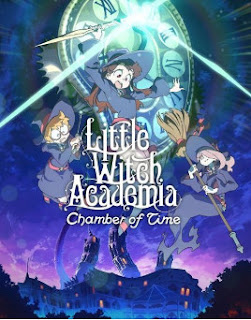 Licensed games tend to be extremely hit-or-miss, but Chamber of Time had the backing of a few prominent names behind it, leading many (myself included) to think it would be better than most.  First, the game is published by Bandai Namco, a huge name in the industry and the RPG world in particular with their long-running Tales series and publishing several other big-name titles like Ni no Kuni.  Second, it did have some involvement from Trigger, as the game utilizes a number of animated cutscenes created exclusively for it, as well as having cutscenes with models and animations matching the show in both style and animation quality.  It's easily the game's strongest point and helped to draw me into it, as well as providing a few laughs in the time I spent playing.

However, the gameplay itself leaves a lot of things to be desired.  This is apparent right out of the gate with the time system the game employs; slightly similar to Majora's Mask, Chamber of Time operates on a constantly-looping timer, with many events (both main story and optional side-events) only occurring at certain times of day.  Unlike Majora's Mask, though, there simply isn't much for you to do in the downtime - the school itself is rather drab and exploring yields almost nothing interesting or useful, while NPC conversations offer little besides the occasional sub-quest to undertake.

Said sub-quests frequently aren't worth pursuing, either.  While they do provide a bit of humor in line with the show, more often than not the rewards one reaps from completing them simply aren't worth it.  One in particularly requires the player to track down seven coins scattered throughout the school, which various NPCs will give clues towards so the player can pick them up on the next time loop, eventually piecing together enough clues to find them all before the NPCs do and turn them in for a reward.  Said reward turns out to be... a single Spellstone, an extremely common currency item one can collect from any dungeon.

The meat of the game - its beat-em-up segments - sadly doesn't make up for this either.  The seven playable characters have very little variety between them, all drawing from the same pool of spells and having only minute differences in their basic melee attacks.  The only exception comes in the form of an occasional powerful attack that can be exclusive to a particular character, but in over twenty hours of playing, I found only three of these, two of which were for the same character.  Spells themselves generally lack any balance, either proving exceptionally weak or devastating everything on the field (even bosses), and boss fights generally amount to little more than spamming your heavy DPS spells until they go down.  The main story dungeons are all seemingly built on tired gimmicks - either having to follow a specific path through a maze or flip switches at junctions while travelling through a mine (with the wrong choice sending you back to the start of the stage to wait through 3-4 minutes of dead time for another attempt).  Optional dungeons are equally uninspired, consisting of exactly three linear screens with only a few enemies and one to two randomly-picked bosses, none of which are particularly hard to defeat.

The game tries to present itself as a Diablo-styled lootfest as well, with five equipment slots per character and each piece of equipment the player finds having a number of random enchantments that add additional effects; boosting the item drop rate, granting extra damage against certain enemy types, reducing damage taken from particular enemies, or resisting status effects.  But even this quickly wears thin because, when the game has so little in the way of variety or strategy to build itself upon, these ultimately have little bearing on how the game is actually played.  In fact, the only ones I found helpful at all were ones that just bolstered my DPS, letting me wipe out enemies with spells a bit faster than if I'd done without.  Certainly a far cry from what games like Diablo and Torchlight provide, integrating these elements perfectly into the game's overall strategy and letting them feel a tangible thrill whenever they come across an item that will let them overcome a challenging obstacle, rather than simply bolstering their already ridiculously overpowered characters' stats a bit more.  One can customize their equipment to a small degree - using gathered items to create a custom enchantment in an empty slot - but again, there is little bearing on the overall strategy, so this just comes across as a waste of time more than anything.

What it all comes down to is that Little Witch Academia: Chamber of Time is a very generic title; it's fun for the first hour or so, but beyond the license and the animation thereof, there's nothing particularly great or memorable about it.  Die-hard fans of the show may want to give it a look if they can get it at a hefty discount, but those looking for a more polished, fun and memorable game in this format should probably stick to Dungeons and Dragons: Shadows over Mystara or Dragon's Crown, which did pretty much everything Chamber of Time does, only years prior and much better. 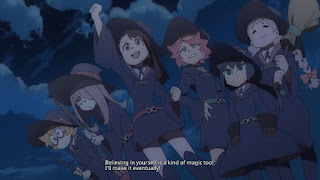 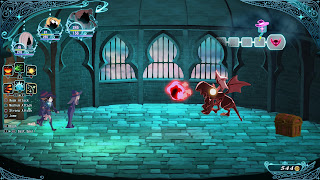 Developer: A+ Games
Publisher: Bandai Namco games
Platform: Playstation 4, PC
Released: 2018
Recommended Version: Both versions are pretty much the same as far as I can tell, though the Steam version is available for cheaper ($40 as opposed to $50).  Both are still very overpriced, but if you must get one, then go for that version.