Released five years after Grandia II on the Playstation 2, Grandia III moved the series to a more realistic visual style for the first time and heavily revamped its combat system.  But does it prove to be a worthwhile adventure, or was this one lost in the generation shift for good reason? 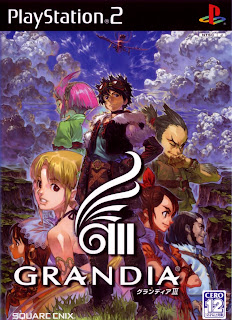 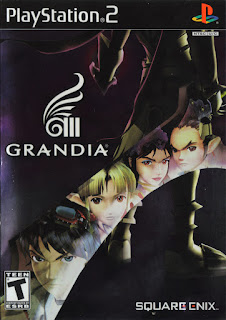 Grandia was a series ahead of its time in a lot of ways, doing away with long-standing design tropes like random encounters and making time and turn order alteration a central focus of its game mechanics, ensuring that stopping an enemy's attack before it even started was just as viable a tactic as weakening its effects with buffer spells.  It was even among the earliest examples of the genre to have voice acting of decent quality, and its unique reversal of era norms - 3D environments with 2D sprites - lent its dungeons a dynamic feel that many others of the era lacked.  Unlike other RPGs of its time, it was also not apt to overusing noninteractive FMVs to push its story, instead letting the player brave many of the hazards themselves and only using them to highlight key moments in the story where the engine simply wasn't up to the task.  Essentially, it was a JRPG that felt a bit like an action movie in many respects, which helped to add to its adventurous atmosphere and charm.

Grandia III continues in that line, taking advantage of the Playstation 2's capabilities to make Grandia III a memorable experience in more ways than one.  The visual style of the series has been given a major overhaul with a more realistic style to its environments and characters.  Cutscenes have been similarly upgraded, with the minimal animation of earlier Grandias giving way to something more on par with a CGI movie- characters interact with one another realistically and even the lip syncing is surprisingly well done.  The voice talent is once again top-notch, with well-known talent like Johnny Yong Bosch, Michelle Ruff and Stephanie Sheh contributing voicework to the game.  Basically, Grandia III is a much more cinematic game than its predecessors, which was no small leap considering its lower-budget origins.

The gameplay is retooled in more ways than one to be faster-paced as well, with the coins system from Grandia II being scrapped in favor of having skills level up when used.  The more often they are used, the higher the chance they have to gain an upgrade - either a faster casting time, extra damage or a quicker recovery after use.  Mana eggs similarly no longer need to be leveled to unlock all the spells within them, but are a much more common element in the game, seeing drops from enemies as well as being purchasable in shops.  Many of the game's best Mana Eggs can only be acquired through a new fusion system, essentially combining two weaker mana eggs together into a more powerful one that has a new set of spells to use.  Tracking down the components for a particular egg can be a journey in itself, though, which lends the game quite a bit of longevity for those searching for 100% completion.

Further adding to that is Grandia III's prominent minigame, Arrange Dice.  Essentially, the game requires the player to roll dice five times, with the number they roll matching a set of five cards on the table; rolling three or more in a row results in a payout.  The odds of a payout are inordinately high with the default card set; Game Arts was seemingly aware of this, as they made many of the best prizes available cost absolutely huge amounts of tokens to buy.  The top prize - a powerful Mana Egg - costs 999,999 medals; with a maximum bet of 1000, that takes quite a long time to get, even if you are consistently getting high payouts.

The game does show some evidence of being rushed, with the storyline largely being pushed into the background by the midpoint of the game and relatively few plot and dialog scenes after the first third or so.  This is further compounded by uneven difficulty, with several instances of enemies taking a major upward leap in power that all but requires the player to stop for a while and grind to get caught up.  However, I didn't mind that very much in Grandia III's case, and this largely comes down to the fact that it features probably the single most fun, addictive and challenging combat system I've seen in any RPG to date.  As with many other elements of the game, Grandia III's distinctive combat - encouraging the player to delay or cancel enemy turns with well-placed attacks - has gotten a drastic overhaul, being better tuned to the overall fast pace of the game and just providing for a very crisp, challenging and enthralling experience in every battle.  Another new mechanic is introduced as well - cancelling an enemy's attack at the last moment will launch them into the air, at which point another character can attack them, juggling them further into the sky with a special animation and racking up a significant amount of damage as they do so.  Some skills will only further add to the damage dealt, such as Yuki's Flash doubling the amount of hits he lands during the attack, and Ulf's midair attack will send the enemy crashing back to the ground at the end for enormous damage.  Basically, one well-placed air juggle can turn the tide of battle, taking a dangerous enemy out of the fight with one extremely damaging combo, or just racking up a ton of damage while being relatively efficient with MP and SP costs.  Not to mention that it's just plain fun to watch and the game even keeps track of your height record, subtly encouraging you to launch enemies higher and higher as your characters' stats and abilities grow.

Grandia III is a bit of a mixed bag with its high production values, but also heavy evidence of being rushed; the plot largely disappears after the first half of the game, and several instances of large difficulty leaps only leave the player wondering if there were supposed to be other dungeons or events in the interim that got dropped for time constraints.  But even in spite of these problems, the game is such an addictive one that its shortcomings were quickly forgotten, with a masterfully-crafted and addictive combat system and a surprising amount of depth in its mechanics that prevents it from ever becoming dull.  A bit sad to think that this may well be Game Arts' last original contribution to the genre, as other than a third Lunar 1 remake and a forgettable licensed Ragnarok Online tie-in, they haven't made another RPG since. 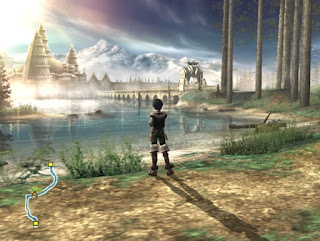 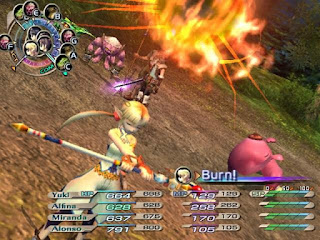