The Dragon Quest franchise, having branched out into MMORPGs, action games, monster breeders and roguelikes, decides to try its hands at another spinoff into the realm of open-world sandbox builder games like Minecraft.  But does Dragon Quest Builders prove to be a competent take on sandbox gameplay, or is this just another iteration of an oft-copied format you can safely skip? 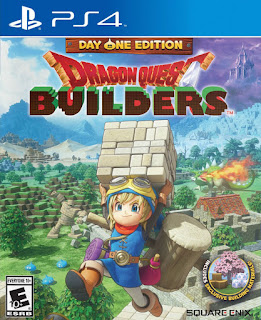 As with any successful and long-running franchise, Dragon Quest has had its share of spinoffs.  From monster breeder games attempting to cash in on Pokemon (Monsters) to action games (Rocket Slime) to rougelikes to even a few games in Koei's Warriors franchise, the series has quite a bit to offer both RPG fans and those used to a more action-oriented style of gameplay.  Naturally, with as huge a hit as Minecraft was (second-best selling game of all time as of this writing), Square Enix saw an opportunity to capitalize on that market as well.

That train of thought brought us Dragon Quest Builders; a game with a plot loosely based on the original Dragon Quest's storyline, though continuing from that game's "bad" ending where the hero joins the villain and the world is plunged into a new age of darkness.  A new hero arises in the form of "the Builder", who has the power to create all manner of useful amenities to ensure survival for the few remaining humans in the world, doing so across five scenarios.

To that end, one must find the site of former towns and rebuild them to attract residents, utilizing materials and crafting benches to build rooms, furnishings and equipment for both themselves and new arrivals.  As a town's level increases (by creating rooms and furnishings), more villagers will come, and with them more opportunities for quests arrive, which in turn unlock new upgrades and furnishings.  Basically, you start with a humble town of little more than a few mud huts and slowly build your way up to a Dragon Quest styled city, earning upgrades the whole way.  These not only come in the form of more crafting recipes for your town, but for your equipment as well - finding ore will let you build stronger swords, armor and shields, defeating monsters earns you new food recipies (necessary to survive, but some also grant temporary stat boosts) while completing quests and felling strong monsters will earn you Life Seeds to boost your maximum health, allowing you to survive longer trips into the wilds.

Of course, being set in a hostile world, one's towns aren't always safe havens.  The game operates on a day-night cycle where monsters becoming more violent at night. with ghosts in particular proving constant pests as they can easily hop over and teleport inside your walls to harass your residents.  As your cities grow, your towns will also periodically come under attack by enemy raiding parties, who can potentially damage your structures and injure your townspeople if left unchecked.  Thus, uprgrading one's city to make it more resistant to monster attacks - generally by replacing earthen walls with stone or steel and setting up monster-deterring traps - quickly becomes an essential step to avoiding a lot of tedious rebuilding after each monster raid.  Upgrading one's equipment to keep pace with progressively stronger enemies, both in town defense missions and to allow further exploration, becomes a major part of the game's overall strategy.

The game is not quite as open-ended as most sandbox games of this type, however.  The player is generally restricted to a relatively small area for a good portion of the running time, with new areas generally being unlocked as they hit certain quest milestones.  These generally come after town defense missions, where the leader of a raiding party will drop a portal item that, when placed in one's town borders, will grant them access to a new island with stronger enemies and materials not present on the starting one.  This means that the game has a generally linear and set progression despite ostensibly being a "sandbox" game, which may upset people used to games like Minecraft and Terraria that are almost entirely open-ended.  However, once the first scenario is completed, a an open-ended sandbox mode is unlocked, allowing players to more fully embrace the creative element of the game with no story-based restrictions.

RPG fans may also be somewhat disappointed that little is carried over between the game's scenarios.  Other than a few crafting recipes, one is essentially forced to start from scratch each time they begin a new arc of the story, with all of their equipment, gained stats and progress reset to bare minimum between scenarios.  Indeed, if not for the fact that a continuous story runs between them, it'd be easy to mistake the game for containing five unrelated mini-games with a similar theme.  Still, the game does attempt to give each scenario some longevity beyond simply completing it.  Each of the five scenarios comes with a list of challenges to complete, such as completing the entire thing in under 20 days or defeating powerful optional enemies around the play area, which adds a bit of replayability for challenge-minded gamers.

For what it sets out to do, Dragon Quest Builders proves to be a success, providing some of the sandbox gameplay of Minecraft whilst mixing in the aesthetics of Dragon Quest and a bit of a town-building element reminiscent of games like Actraiser and Dark Cloud.  While I wouldn't consider it a complete success - not being as deep or memorable as the games it tries to emulate - it nevertheless proves to be a surprisingly entertaining game, both for those of a more casual gaming mindset and die-hard gamers looking for challenges to complete and trophies to unlock.  So if you're looking for a more relaxed RPG experience with a charming atmosphere and quite a few callbacks to classic Dragon Quest, I'd say Builders is worth a look. 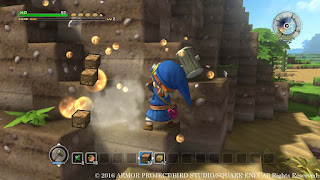 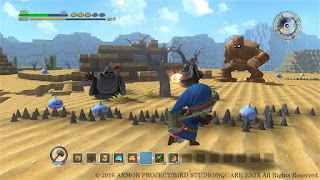 Developer: Square Enix
Publisher: Square Enix
Platform: Playstation 3, Playstation 4, Playstation Vita, Switch
Released: 2016, 2018
Recommended Version: All versions of the game are very similar, though the Switch port (the latest to be released) adds in some exclusive content in the form of the Great Sabercub, a rideable monster that can fight enemies and cause them to drop "pixels", which can be used to craft tiles in the visual style of the original Dragon Quest.