After many years of teaser trailers, heavily poured-over magazine previews, platform changes and at least one cancellation and revival, Mother 3 finally debuted on the Game Boy Advance in 2006, over a decade after it was first announced.  But was the conclusion to the Mother trilogy worth the long wait, or was it just a long buildup to letdown? 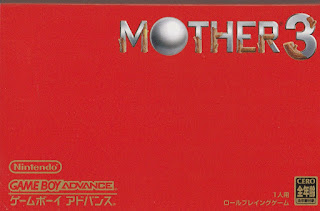 Earthbound, though not a popular game in its heyday, did amass a considerable cult following over the years, which was in no small part due to the popularity of its sequel among the fan translation community.  But for those who got into the series in the nineties, the wait for the game was an ordeal in itself.  First announced as a Nintendo 64 title and slated for release in 1998, it was later moved to the Nintendo 64 Disk Drive, moved back when that addon proved to be an enormous commercial flop, then finally cancelled entirely in 2001 when the Gamecube was released and the developers still had not overcome significant technical hurdles in development.  However, the project was revived a few years later on the Game Boy Advance (though this platform shift naturally required programming work to essentially be restarted from scratch) and eventually finally released in 2006, with a fan translation following two years later in 2008.

That long and patchy development cycle certainly is evident in the final product as well.  Many elements teased in early previews, such as a minecart sequence, most of the character designs and an "ice cream cone shaped tank", and the overall setting (seemingly mostly in a desert-like setting in early versions) are nowhere to be found in the final game or relegated to much smaller roles.  Even the game itself has many leftover elements from its numerous rewrites and retoolings, with numerous changed dialogue scripts and unused gameplay elements remaining buried in the code (including, most famously, a completely different and much more nightmarish final battle sequence).  Strangely it still feels a bit rushed in places despite the protracted development time, with the ending in particular being noted for having its events described almost entirely in text with no onscreen graphics at all.

Perhaps because of this, the game itself is also much more linear than earlier entries in the series.  Indeed, with few exceptions, every chapter of the game takes place in an entirely new area from the previous ones, with almost no opportunities to retrace one's steps or just revisit previous areas and see new dialog therein.  This does work in some ways, affording the player very few opportunities to become lost, but it can lend itself to frustration at times - missed items cannot be gone back for, and if one hits a particularly tough boss they can't overcome due to inadequate equipment, they may be stuck with little recourse but to level grind for a substantial amount of time.  The game is much more difficult than its precursors, too - some bosses are utterly ruthless and will take quite a lot in the way of resources, strategy and, at times, just plain luck to bring down.

However, quite a few familiar elements do return from both earlier games and early previews.  One prominent element of Mother 3's early development returns in a new combat mechanic, allowing the player to earn extra damage on normal attacks by timing button presses to the rhythm of the enemy's "heartbeat" (which is revealed to the player when the enemy is put to sleep via a Psi effect).  Up to fifteen extra hits can be tallied through this; while each hit after the first does diminishing damage, it can make a very substantial difference in the long run once the player gets good at timing it.  Another slight changeup comes in the rolling HP meter from Earthbound - while largely retained from that game (and still an essential part of surviving some fights), the player now has the ability to greatly slow the counter down by utilizing the Defend command; not only does this give that command some practical use, but it makes the rolling HP mechanic a useful tactical option even at lower levels.  The ability to instantly defeat much weaker enemies returns as well, though in a somewhat different form - the player can now dash via the B button as they attempt to avoid enemy sprites that will trigger an encounter, but if they make contact with a weak enemy while doing this, they'll bowl right through them and immediately get credit for a win.

The overall aesthetic of the game remains similar to its predecessors, with colorful, quirky environments and characters and an overall style reminiscent of western comic strips.  Combat still features relatively minimal animation, with the mesmerizing combat backgrounds and PSI effects returning from Earthbound and only static sprites for the enemies themselves; however, some scaling effects come into play when the player defeats an enemy, causing their sprite to fly off into the distance and vanish, which is a nice touch.  Things outside of battle show a surprisingly large amount of new detail as well - nearly every NPC in the game has a complement of full sprites for their various actions, and even the party members themselves now have animated sprites for dialog scenes and interact with the environment in clever new ways like swinging on a "rope snake" or riding across the landscape on a table.

Of course, no mention of Mother 3 can go without mentioning its tone.  While the game does retain the quirky humor and many of the modern elements of its predecessors, Mother 3 also takes things in a much darker direction.  Elements of abuse, cruelty and grief are prevalent throughout the story as the characters meet with tragedy and become surrounded by the evil invading the game's world.  This is perhaps no more evident than in the enemies the player faces - many of them are bizarre fusions of animals and machines or other animals, seemingly made by the villains just for some sadistic fun rather than any practical purpose.  As earlier entries in the series did, Mother 3 pulls no punches when it comes to emotional impact, pleasant and unsettling alike.

Despite some rough edges and a few balance and pacing issues,  Mother 3 becomes another memorable entry in the franchise and a grand sendoff for its story arc that was almost two decades in the making.  Even with much evidence of its long and bumpy road to completion staying prominent in the final game, it proves to be another worthwhile adventure that takes the player on an emotional journey and gets them invested on the sheer strength of its atmosphere, writing and the sincere charm within.  Sadly it's also a game Nintendo has been reluctant to localize in any form, but those savvy to importing or emulation can find a game very much worthy of concluding the tale of one of gaming's greatest hidden treasures. 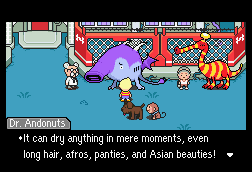 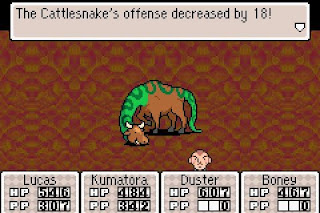