Grandia's second entry was a largely overlooked one, seeing a relatively low-key release on the Dreamcast and later lackluster Playstation 2 and PC ports which, for many years, were the only ways to play the game.  But is there a worthwhile game beneath the surface of obscurity, or is Grandia II one of the least spoken-of Grandia games for good reason? 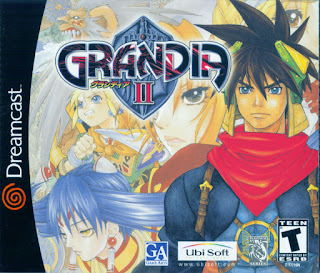 Released only a year after the original game's debut on the Playstation, Grandia II was also one of the few RPGs released on the short-lived Dreamcast console.  While generally a well-regarded game in its time, it was largely overshadowed by the combined efforts of Phantasy Star Online and Skies of Arcadia.  Its second attempt at fame on the Playstation 2 was overshadowed once again by Final Fantasy X, which featured an overall similar plot and themes and had a much bigger studio name behind it, not to mention being hampered by a lackluster porting job that resulted in numerous technical issues and glitches.

Still, those who picked up Grandia II found a high quality game awaiting them.  Retaining the innovative combat system of the original, which allowed the player to delay enemy turns or even cancel them entirely with well-timed attacks (and the enemy able to do the same to them if they weren't careful), Grandia II upped its game on many fronts as well.  For a start, the game features a darker aesthetic overall, with some downright eerie enemy designs in places, and the story continues to be conveyed through FMVs that combined hand-drawn and CGI elements.  Some particularly powerful special moves utilize these as well, giving them quite a bit more visceral impact, though the in-game graphics themselves are mostly a product of their time - being on the Dreamcast, they meet an odd middle-ground, having relatively low-polygon models evocative of the Nintendo 64 but high-quality textures reminiscent of the Playstation 2 and Gamecube.  Key plot scenes and special moves are still voice acted, but now feature names like Cam Clarke, Paul Eiding and Jennifer Hale - a stark contrast to the first game's localization, which seems to have been done on a shoestring budget with the cheapest actors they could find (many of which never acted in anything else).

Grandia II is a considerably more streamlined game than its predecessor as well, with a campaign roughly half the length of the original game's.  However, this is not to say that it's short-changing the player in content - there are still plenty of challenging dungeons and bosses to face, and the layouts thereof still retain their challenging, trap-laden layouts without being as opaque and difficult to navigate as the first game's.

This is most evident in the game's magic and skill systems.  Rather than having to individually level each one up through repeated usage, battles now award the player with quantities of Skill and Magic coins, which they can freely spend to level up skills and spells of their choice.  Magic is no longer tied to individual characters either, instead being assigned to "Mana Eggs"; coins can be spent to unlock new spells on a particular egg or power up ones that already exist.  Eggs can also be freely swapped between characters, which is slightly similar to the Materia system from Final Fantasy VII, though unlike that game, each character can only equip one Mana Egg at a time.

Grandia II's story, as mentioned, is a much darker tale than its predecessor.  Rather than a simple story of finding adventure in a fantasy world and confronting evil along the way, the game explores much more complex themes of religious persecution, personal revenge and the evils of both man and monster.  Ryudo is at the center of much of this, and it gets reflected in his personality for a good portion of the game - he's honestly a pretty big jerk for a good portion of it.  Though he never goes too far and becomes unlikable as a character, it was definitely unique for its time to see a JRPG protagonist who wasn't a goody-two-shoes by most any stretch.

This new turn doesn't go off completely without a hitch, though.  Some plot elements are relatively vague in their execution, without much explanation given for why things are the way they are, and a few cheesy anime tropes kick in, lending some rather silly and implausible convenience to the final hours.  While they never go too far into cringe-worthy territory, I still felt that a bit more time spent explaining out the plot, and possibly adding a bit more to its narrative, could have helped these be avoided.

Nevertheless, Grandia II is a game that is well worth a look for any serious RPG fan.  Its combat system is as fun as ever, the world design is streamlined without feeling dumbed-down, and its story, despite a few hiccups, is a compelling one, with some strong characters and smart, well-executed themes emblematic of the era in which it came out.  Top that with some strong dialog and unforgettable characters, and you have another title which only makes me question further why Game Arts has largely retired from making RPGs when they were so good at it in their time. 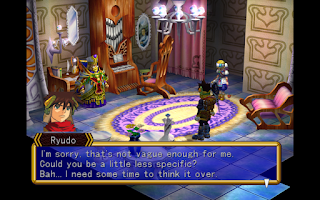 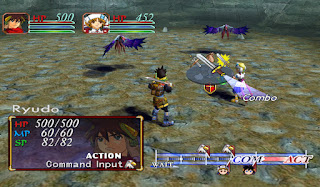 Developer: Game Arts/Rocket Studio/SkyBox Labs
Publisher: Game Arts, Enix, Ubisoft, GungHo Online
Platform: Dreamcast, Playstation 2, Windows, Playstation 4, Switch
Released: 2000, 2002, 2015, 2018
Recommended version: Between the two console releases, the Dreamcast version is definitely superior - the Playstation 2 version is riddled with slowdown and various graphical bugs.  However, in the years since, a PC "Anniversary Edition" release has been made, which adds some new features like Steam achievements and a harder difficulty level. I did encounter a recurring crash bug with a particular animation on one late-game boss, but nevertheless, this is the version I would recommend nowadays.  An HD port for  Playstation 4 and Nintendo Switch was also announced, though at the time of this writing it has not yet been released.