Nintendo's entry to the RPG genre in the mid-1990s was heavily hyped and promoted, but even in an era where the genre was starting to become big with games like Phantasy Star IV, Chrono Trigger and Final Fantasy III, it met with lackluster reviews and low sales.  But does Earthbound have some merit that was simply overlooked, or does it only have limited cult appeal for a reason? 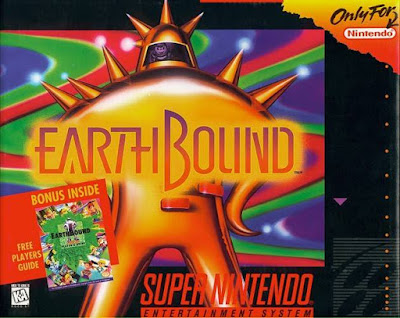 Earthbound is one of Nintendo's strangest cases; while it is regarded as a classic today, you'd never guess it would end up there if you were present in the era of its release. Selling a scant 140,000 copies over the course of its existence on the Super Nintendo, it was panned by reviewers who compared it unfavorably to its contemporaries - its relatively simple graphical style, minimal animation and lighter mood all met with criticism, as did its high price point (being released in a deluxe box with a player's guide and several extras like scratch-and-sniff stickers and an air freshener).  Probably not helping matters was a terrible advertising campaign from Nintendo, proclaiming "this game stinks!" and coming with unpleasant scratch-and-sniff panels that reinforced that claim, without really mentioning much about the game itself.

Not that they weren't trying to make Earthbound shine, of course.  Earthbound's design has seen many improvements over its predecessor, making efforts to polish up its gameplay and improve upon its general themes.  Random encounters (a constant irritant in the original game) are now replaced with visible ones, allowing the player to evade battles occasionally or, in some cases, exit and re-enter a room to get a more favorable enemy pattern.  While it does still feature uneven difficulty at times, it's not nearly as prominent as Beginnings in that regard; in fact, I rarely had to level-grind at all, as the game provides plenty of ways to deal with tougher encounters.  Another relatively new feature is the fact that the game allowed for sneak attacks on enemies to get a free round at the start of combat (though they could do the same to the player, too) and, in some cases, they wouldn't have to fight at all - enemies far below the player's level would flee from them on sight, and if the player made contact with an enemy they had an overwhelming power advantage against, they would instantly win the fight and be awarded the experience points and items without having to go through the motions of the combat system.  The in-game inventory is somewhat less cumbersome now with a total of 14 slots per character as opposed to Beginnings' 8 (though as currently-equipped gear still takes up slots, this is effectively 10 most of the time).  Psi growth is now a linear process (gained at fixed levels rather than randomly), and PSI abilities in general are more utilitarian and useful, which eliminates some of the clumsiness present in Beginnings.

Occasionally unclear objectives are no longer an issue either, as the game is more linear in structure overall and features a "Hint Man" who will tell the player exactly what they have to do next for a small fee.  But Nintendo seemingly feared that even this wasn't enough, as every copy of the game came packaged with a full-fledged player's guide which provided a full walkthrough, as well as boss strategies, maps and even quite a lot of flavor text in the form of fictional newspapers for each location.  Notably, it also contains many of the clay models used as a basis for the in-game sprites and a few shots from an unfinished beta version of the game, which was a pretty rare glimpse behind the scenes of the development of a Nintendo-published title.

Earthbound's graphics were a primary point of criticism, with only minimal animation and a relatively simple visual style seemingly inspired by western comic strips like Peanuts.  However, I find the overall style to add to the game's charm, complementing the sense of humor prevalent throughout.  That said, while other RPGs of the era were moving into a more cinematic and animated style for their combat scenes, with the most prominent example being the almost anime-like Chrono Trigger, Earthbound retains its relatively simple text interface and static sprites for foes in its battle system.  Still, an attempt was made to keep visuals interesting by having a variety of backgrounds behind the action with scrolling and often trippy visual effects, as well as contributing the occasional joke (such as the "third-strongest moles" having a special background reading "No. 3").  Psi attacks also benefit from animated effects, usually showing flashy patterns that bear some resemblance to their namesake like a waveform-styled line for PSI Fire.  It doesn't really push the Super Nintendo's hardware to its limits as other games of the time were wont to do, but it nevertheless makes combat visually interesting in an unconventional way.

Indeed, Earthbound seemingly goes out of its way to defy RPG conventions at almost every turn.  Instead of a handful of generic "potions" for restoring items and curing status effects, Earthbound has a huge variety of food and medicinal items, each with their own unique effects and flavor text viewable via the "Help" command in the menu.  On top of that, a number of unconventional items see use throughout, with some actually proving useful in combat (like the Toothbrush being able to stun enemies) while others just provide jokes (like the Ruler, which allows the player to "figure out the length of things easily" even in the thick of battle).  The game takes advantage of its modern setting to provide an equally bizarre cadre of enemies to face, from Enraged Fire Plugs to Abstract Paintings to ghosts to hieroglyphs to Clumsy Robots.  Even some unique features creep in, like the ability to order pizzas mid-adventure (taking three real-time minutes to be delivered) and having to occasionally call home, lest Ness get stuck with the crippling Homesickness status and be unable to fight effectively.  Another unique feature is the "Rolling HP Meter" mechanic; damage is not applied all at once to party members, but rather causes their HP meters to continuously roll down after they take damage, giving the player a few seconds to use a healing item or Psi and save them from a blow that would otherwise kill them.  Indeed, this becomes an essential part of the game's strategy later on, as some bosses and even regular enemies do rather absurd amounts of damage with their attacks.

Earthbound's unconventional nature even extends into the playable characters themselves, as none really fit into a set archetype.  Ness is more or less the party tank, having relatively low speed but high HP and attacking power, but he also serves as the game's primary healer for much of the runtime as he is the only one with healing Psi skills until roughly the midpoint.  Paula is more or less a mage, having low HP and only average attack power but powerful PSI; however, she gets the Pray command too, which has a vast number of effects that can turn the tide of a battle for both good and ill (and is generally best used as a last resort for this reason).  Jeff is the only character that cannot use Psi in any form, but he makes up for this by being able to Spy on enemies (revealing their weaknesses), utilize powerful "Bottle Rocket" items and repair broken objects, which often bear little resemblance to what they began as; for instance, a Broken Trumpet becomes a Defense Shower, which bolsters the entire party's Defense stat.  Finally, Poo is a bit of an odd case, having extremely limited options for equipment, only receiving minimal effect from most healing items and starting underleveled to boot; however, he does have the best overall variety of Psi powers, well-balanced stats and the Mirror ability, which allows him to transform into enemies and utilize all of their abilities himself (though sadly it does not work against bosses).

All of these things, in various ways, contribute greatly to Earthbound's charm, allowing it to establish itself as a traditional RPG in some respects, but one very unlike anything else in the genre in others.  But more than anything, Earthbound's focus is on its atmosphere, putting the player into a unique, colorful and quirky world and just letting them explore all its intricacies and enjoy its humor.  Nearly every NPC in each location has something humorous to say, dungeons, enemies and locations are enjoyably outlandish every step of the way and the music and audio design is absolutely spot-on, immersing the player perfectly in whatever locale or mood the game is currently trying to convey.  I dare say it is my favorite game soundtrack of all time for this very reason.

More than anything, however, Earthbound's selling point is its atmosphere.  The narrative at its core is a rather basic coming-of-age story with the archetypal save-the-world JRPG plot to back it, but it ropes the player in with its quirkiness and takes them on a ride through a world resembling our own, making new friends at every turn and showing the wonderment of every location they explore with an earnest and sincere charm.  Its strength is not in what it shows to the player, but what it makes them feel as they take the journey with these characters and experience what they do every step of the way, and Earthbound is one of the few games I've played that honestly does this well; it never once tells the player what they should think, instead just presenting them with events and characters and letting them make up their own minds about it.

As I've been saying throughout this review, Earthbound is a unique case, seemingly going out of its way to defy convention at every opportunity, but never letting this drag down its gameplay or interfere with the mood and humor it builds itself upon.  While it does have some annoying elements to its design, I found myself not minding them too much, as I was always eager to see just what the next step of the journey would bring, even if I had to repeat a dungeon due to getting killed off near the end or got stuck fighting some irritating enemy battles more often than I'd like.  Its sincerity and the unforgettable journey it presents outshines its weaknesses and makes it an experience I've never forgotten and never once gotten tired of playing, even twenty-three years after its original release.  Honestly, I don't think anyone can even do it justice with a review, because while it is a well-designed game at its core, it shines much brighter on being an experience; one that must be played to fully appreciate what it is and where it succeeds. 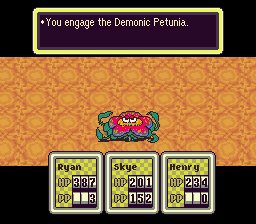 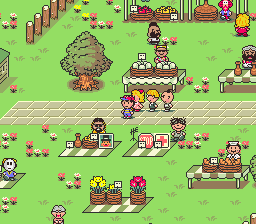 Developer: APE, HAL Laboratory
Publisher: Nintendo
Platform: SNES, Wii U Virtual Console, *New* Nintendo 3DS Virtual Console, SNES Classic
Released: 1995, 2013, 2016, 2018
Recommended Version: The SNES version is now one of the rarest and most expensive games on the platform, and is the only way that the game could be played for a long time; however, it has seen an emulated release on the Wii U and *New* Nintendo 3DS Virtual Console services, giving a less expensive option for modern gamers.  It is also available as a featured title on the SNES Classic microconsole.

Some minor changes are present in the rereleased versions; a temporary blur effect is applied to the screen during some of the more intense Psi animations in an attempt to reduce the risk of epileptic seizures, and some effects that flickered the screen on the SNES version are made less intense for this reason as well.