Originally planned for release on the NES in the early 1990s but cancelled after it was deemed to be unprofitable, its sequel's rise to cult classic status sparked renewed interest and eventually led to its release on the Wii and 3DS Virtual Console services.  But does this forgotten NES RPG still hold some appeal today, or is this one piece of history that should have been left in obscurity? 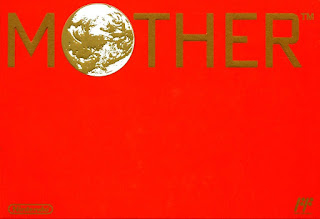 Originally announced in the early 1990s for the NES as "Earthbound", the first in the Mother trilogy would go unreleased in an official format until over twenty years later on the Wii U Virtual Console.  However, fan interest did develop quite heavily between those two points, with a prototype of the translated game surfacing on eBay and eventually being dumped to the internet as "Earthbound Zero", sparking interest in both EarthBound fans and collectors of obscure NES memorabilia.

Nintendo clearly had high hopes for the game themselves, as the prototype showed many significant changes and upgrades from its original release.  While it did undergo some visual censorship to remove elements like a crow smoking a cigar, some minor instances of blood and crosses on church windows, steeples and tombstones, other changes improved it for the better, including less complex dungeon layouts and an extended ending that gives a bit more closure to the overall story.  Essentially, it was changed to provide a more fluid and complete experience - ones that would help it appeal to a relatively niche market of Japanese RPG fans at the time.

That aside, the game also holds much appeal as an early predecessor to the SNES cult classic, and it's interesting to see where the series' storyline had its origins.  While not as polished in terms of translation as its sequel, it is also interesting to see the beginnings of a lot of Earthbound's unconventional mechanics and off-the-wall humor, from its whimsical enemy designs and bizarre setting to just having things only included to make the player laugh, such as being able to purchase an expensive "Last Weapon" only to have it tell the player how to turn off their console (essentially "ending the game" as it is too powerful to use normally). Of course, it proved to be the origin of the series' overall aesthetic as well, with a visual style largely reminiscent of Sunday newspaper comic strips, in-battle sprites built on claymation models (many of which can be seen in promotional and side material for the game) and a great soundtrack, many songs of which would appear in the two later games.  Magicant - a significant endgame location in the sequel - serves a more prominent role here, essentially being the game's main hub where the player can return to at almost any time, and will frequently have to in order to progress the plot and equip and train new party members.

Earthbound Beginning is not without its problems, though.  Being a product of its era, the game is heavily reliant on raw level grinding in order to proceed, with more than a few instances of the player hitting walls of powerful enemies and being forced to retreat, spent a few hours powering up, and come back to take another crack at it.  Not aiding this is the fact that each of the party members the player recruits starts at level 1, all but requiring them to return to Magicant for a time in order to equip and level them up.  Nor does the fact that, unlike the sequels, PSI powers have a significant random element to them, with the player randomly gaining them after battles.  Which, in turn, only means more grinding.

Objectives in the game aren't always clear, either.  While progression in the game is relatively linear for the most part (save for about the midpoint of the game where you're given some opportunity to roam via the train system), it's not always clear who you need to talk to or what exactly you may need to do in order to progress.  One easily overlooked ability the player has in their repertoire is the "Telepathy" ability that has no real function at first glance, but must be used at certain points in order to progress (usually reading a character's mind or, less intuitively, the "minds" of objects the player encounters).  Another particularly strong example of this is that returning to Magicant and exiting will, on at least one occasion, take you to an entirely new area with no forewarning of the fact that this is what is required to progress.  The game's other main objective - collecting eight fragments of a song - is also somewhat unintuitive at times, though the game does at least throw you a bone here and tell you where to find any you've missed once the main storyline starts nearing its end, allowing you to go back and get them as needed.

Earthbound Beginnings' difficulty is notoriously uneven as well, with occasional staggering leaps in enemy power that can prove difficult to overcome even in the late stages.  This only reaches its peak once the player hits Mt. Itoi, where seemingly every enemy has hundreds of HP, devastating special attacks, instant kill moves, or suicide moves that trigger on their death and inflict huge damage to the party - and often they will have several of these at a time.  I actually found it a more viable strategy to just run from every fight once I got to that stage.  This didn't leave me at as big a disadvantage as one may expect, either - the stat-buffering moves are universally overpowered, so I was able to withstand the final bosses' attacks by simply casting Defense Up on each of my party members and enjoying the 100+ point boosts it grants.

What it comes down to is that the elusive prequel to Earthbound is very much a product of its time, existing before things like game balance, well-paced progression and reasonable difficulty curves became the norm.  However, it is a notable game too, bringing a relatively unique (and new for the time) modern fantasy setting and sense of humor to the genre while retaining many of the design tropes of genre-definers like Dragon Quest and Wizardry.  It's certainly not a perfect experience and its flaws are only more prominent today, but Beginnings is still worth a look for fans of Earthbound or just obscure old-school RPGs on the whole. 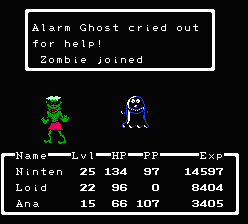 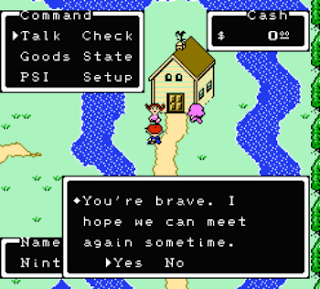 Developer: APE, Pax Softnica
Publisher: Nintendo
Platform: Famicom, Game Boy Advance, Wii Virtual Console, Wii U Virtual Console,
Released: 1989, 2003, 2015
Recommended Version: At the time of this writing, the only way to acquire the English version of the game legally is via the Wii U Virtual Console service.  One curious oddity is the Japan-only Mother 1+2 compilation for the Game Boy Advance, which does not feature the original Famicom release of the game; instead, it features the unreleased English prototype translated back into Japanese, retaining its censored graphics, changed gameplay elements and extended ending.