Level-5's last prominent release on the Playstation 2, Rogue Galaxy strays away from the fantasy setting of Dark Cloud 2 in favor of a science fantasy adventure with action combat.  But does this changeup result in a fun game, or is Rogue Galaxy's new direction a non-starter? 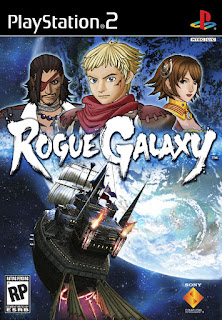 After the Dark Cloud games became hits on the Playstation 2, as did followup franchises like Professor Layton on the Nintendo DS platforms, people have long clamored about a Dark Cloud 3, piling on rumors to that effect for many years since.  Level-5 has yet to deliver on that, but what arguably came the closest for a long time was their last Playstation 2 release, Rogue Galaxy.

Rogue Galaxy's action on the whole feels similar to Dark Cloud 2's, allowing the player to attack, throw objects to stun enemies, and wield two weapons at once - generally a longer-ranged but weaker one and a slower melee weapon, though this varies a bit from character to character.  One new addition here, though, that each character gets a variety of spells to cast via a menu, running off the typical MP bar and ranging from weapon buffers to full-screen attacks that damage all enemies onscreen (though curiously there are no healing spells - you're still reliant on items for that).  Another odd change is that the player can only attack with a given character so many times in a row before they deplete a "stamina gauge", at which point they must either wait a short while or go on the defensive and block an enemy attack to restore it to full and continue fighting.

These in turn are governed by a Revelation Flow chart unique to each character.  Somewhat similar to the License Board system from Final Fantasy XII, the player progresses linearly from one "slot" on the board to the next, though they don't simply spend generic points to unlock new abilities; instead, various items found throughout the game, whether purchased or dropped from enemies, are used to fill in slots on the board and unlock new abilities.  While this does often work to prevent the player from getting overpowered skills early, it also has the unfortunate effect of stunting their growth at times, leaving their only recourse to deal with a difficult encounter to level up or just spam items.  The attempts at limiting power also aren't the best implemented; on both playthroughs I seemingly got Jasper's mid-tier fullscreen attack earlier than was intended, and its power was such that it could sweep all enemies out of the encounter in one hit, making the midpoint of the game a breeze.

Combat on the whole is also hampered by three other factors.  First is the fact that the game still uses random encounters; more than a bit outdated by 2007, and it gets to be annoying very quickly, particularly when fights seem to pop up every other step and the requisite encounter-limiting items last for barely a  minute before you're forced to use another one.  Rogue Galaxy, like the Dark Cloud games before it, still features no proper armor system (other than "costumes" that grant a miniscule resistance to one element), and unlike that game, there are no items that bolster a character's defense value or maximum HP.  This means that from the start of the game until the end, it only takes two or three good hits to take out your character, and in large-scale fights with many enemies, you can easily be seeing the game over screen before you realize it.  Not aiding this is the lackluster party AI, which, as in many games of this type, tends to get hung up on "gimmick" enemies that must be hit in the head or from behind, or simply flies out of their range for much of the fight.  To the developers' credit, though, they do at least bar them from spending MP and using items excessively, always prompting the player to confirm these actions by pressing one of the shoulder buttons instead, which helps to conserve resources in many situations.

Rogue Galaxy, like most Level-5 games, certainly is not lacking for content, either.  There are numerous hidden items to be found in every area of the game, and fully exploring the map of a given planet will place all chests on the map as icons, allowing the player to easily backtrack and pick up any they missed.  There are countless sidequests to undertake as well, mostly in the form of bounty hunts against powerful foes that only spawn in particular areas, with the player's ranking tracked via an in-game scoreboard and new rewards being unlocked every ten ranks they rise.  A Pokemon-esque monster raising minigame is present as well, allowing the player to capture bugs and pit them against opponents in an arena for bonus prizes, though I didn't bother much with this in either of my visits with the game.

Two different crafting systems are present as well, with one taking the form of "Toady", allowing the player to combine sufficiently leveled-up weapons together into a new ones with higher stats and abilities, which in turn can be leveled up again and combined into more powerful ones, slightly reminiscent of Dark Cloud's weapon crafting system.  The other, somewhat reminiscent of the Georama element, has the player building specific factory setups to craft new items out of blueprints and base components (generally found items and particular maxed-out weapon types), which is necessary to obtain many of the best weapons in the game.  However, I used this very little in both of my playthroughs, as many of the best weapons don't become available until the postgame anyway, at which point your only real remaining goal is to max out the in-game achievement tracker and possibly complete a bonus postgame dungeon in the form of a ghost ship full of difficult enemies.

That stuff's all well and good, but Rogue Galaxy, for me at least, hit the point of diminishing returns well before I was done with the main plot, leaving me little incentive to explore the side content to its fullest.  This isn't aided by a rather weak storyline and a cast that proves generic at every turn, having virtually nothing in the way of chemistry with one another and only the barest minimum of backstory (which all seem to fall into typical cliches at every turn).  When a game comes out over a decade after the SNES era had by and large ended, yet still features lackluster character writing on the same level as many games of that era, it doesn't really speak well of the writing staff behind the game, particularly when numerous other RPGs on the platform featured incredible character development and storytelling on par with a good film series or anime (Xenosaga, Final Fantasy XII, the Persona games) or at the very least, a solid sense of humor to fill in the gaps (Shadow Hearts).  It says a lot when I learned through the in-game skills menu that Jaster and Kisala were meant to be the love interests of the game, as they have literally zero scenes or lines of dialog to that effect at any point during the adventure.

In short, Rogue Galaxy, while a game not hurting for things to do, is severely hampered by its developers' intent on doing things in their own "unique" way, leaving it lacking several key elements of the genre and its overall design.  Similarly, the player is left with little in the way of variety or ways to grow their characters and little motivating factor to do so owing to its weak writing.  Its frantic combat is fun for a while in spite of its shortcomings, but it's not terribly long before it just becomes a chore to play. 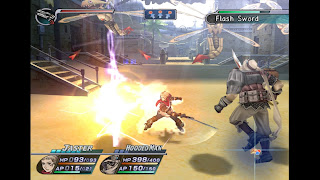 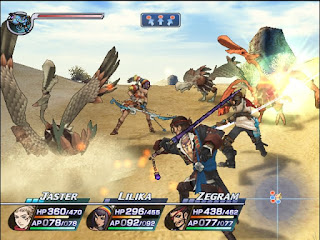