Kingdom Hearts is an unlikely crossover between the Square Enix and Disney universes that exploded into a wildly successful franchise.  But does this odd combination feature the best of both worlds, or does it try to do too much and ultimately just fall apart? 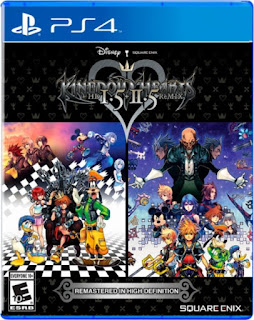 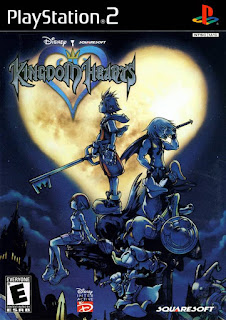 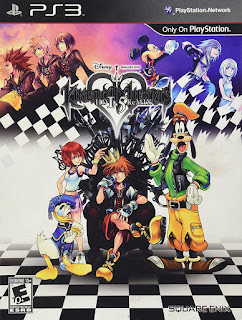 The Disney universe, as wildly popular as it is, naturally has had a large presence in the world of gaming since its outset.  With everything from action-platformers to stock market sims to point-and-click adventures under their brand, Disney remains a looming figure in popular culture no matter where you look.  However, they oddly never had much of a presence in role-playing games, whether the more technical CRPG-styled ones or the more action and cinematic-driven Japanese styled RPGs.

That all changed in 2003 when Square-Enix released Kingdom Hearts, a game which combined elements of Final Fantasy, Mickey Mouse and a number of prominent Disney movies (both classic and modern) together into one big conglomerate.  Naturally, Square Enix's flair for complex plotlines, grandiose setpieces and an overall cinematic feel fit well with Disney's, so fans of both universes got excited for this new, if unorthodox, crossover.

However, it soon grew well beyond what it started as and became, for lack of a better term, just plain silly.  The Kingdom Hearts franchise has become much less known for being a Disney crossover and more for being a convoluted Kudzu plot, the original characters and story elements within all but eclipsing the Disney element.  Time travel, evil doppelgangers, space travel and virtual worlds all became a part of the setting, and it all began to feel like a child's very convoluted fan fiction to newcomers and long-time fans alike.

Because of all of that, it's easy to forget where the series began - as a relatively humble action-RPG, largely centered in the Disney universe and with only a handful of Final Fantasy elements worked in.  While the series' main protagonists and antagonists were original creations, they were immersed in a bright, colorful, Disney-esque world and visited more of the same, a rather archetypal plot about seven maidens and a magical seal serving as the backdrop to a fun adventure with a lot of service for Disney and Square fans (primarily in the form of themed worlds and character cameos).  They even went above and beyond with the concept by having many of the actors from the various Disney films reprise their roles in the game, which is quite a nice touch.

For what it was, Kingdom Hearts also proved to be a polished and surprisingly fun experience.  The game at its core functions as a relatively straightforward action-RPG, letting the player engage enemies in real-time battles either through a simple melee combat system or fight them from afar with spells, using the occasional item or special move to get them out of a jam.  World designs, while mazelike to a degree, provide enough hidden secrets and alternate paths to keep things interesting, while the occasional boss fight or summoning spell works to both tie the game to the Disney licenses and keep the player enthralled in both the gameplay and story.

Naturally, being a Square game, there is also a substantial degree of character customization present.  At the start the player is given the choice of three weapons (a sword, shield and wand), which affect both how their stats grow and what particular skills they will gain over the course of the game; while there is much overlap between all three of them, a few remain exclusive to a particular path, with the Sword primarily granting physical attributes (extra HP, attack power and combat skills), the Wand granting boosts to magical power and MP regeneration, and the shield being primarily supportive and defensive techniques.  The player must then choose to give up one of the two items they didn't select, which subtly affects their stats as well - giving up the shield, for example, will cause them to gain fewer HP and defense points over the course of the game, while losing the Wand grants fewer MP.  Following that, a few dialog choices will affect the character's experience gain and stat growth, gearing quicker level gain toward lower levels, higher levels, or a relatively even spread throughout.

As is standard for most action RPGs, your party members (Donald and Goofy, with world-specific guest characters) are primarily computer controlled, but their actions can be influenced to a degree via a menu (using less spells, preferring melee attacks, when to use items, et cetera).  Still, they do still tend to fall prey to some common downfalls, such as using up potions quickly or Donald trying to melee attack enemies (or just stand motionless in front of them) and quickly getting himself killed.  Still, they never prove to be too much of a hindrance, unlike some game (coughSECRETOFMANAcough), and they will automatically revive themselves after a short while if incapacitated, so they never become a huge burden.  Some occasional clumsy collision detection and enemy AI does lend itself to frustration as well, as does the camera, which is situated just a bit too close to the player in most circumstances and can cause discomfort during more fast-paced battles with its frequent shifting.

Also coming standard for Final Fantasy and JRPGs on the whole, Kingdom Hearts has a lot of optional content to keep die-hard players interested.  A number of minigames are present, from competing in the arena in Hercules' world against a number of optional bosses (including fan-favorite Sephiroth) to finding a number of "Trinity Points" throughout the world; these basically serve as time-based unlockable treasures, allowing the player to backtrack to previous worlds and activate them after certain points in the plot.  At about the midpoint of the game, the Synthesis Shop also opens in Traverse Town, allowing rare items and powerful pieces of equipment to be crafted from various rare items strewn throughout the world (usually requiring the player to defeat rare and powerful enemies to get them).

By far the most prominent of Kingdom Hearts' minigames is the Gummi Ship shooter segments.  In short, these serve as linear rail shooter stages a la the Star Fox series that the player traverses as they travel between worlds.  In addition to earning points for blasting away enemies and obstacles, one can pick up the objects they drop to get new parts for their ship.  The ship itself is built out of various interchangeable parts, a la Lego, and can be customized in any way the player sees fit.  A number of prebuilt blueprints can be found during these segments as well and generally take the form of Final Fantasy references, though this is more of a novelty than anything (the Cactuar ship, for example, doesn't even have any weapons on it by default).  This does prove to be fun to a point, but these segments do quickly get rather drawn-out and tedious as the game goes on and you end up having to travel back and forth between worlds over and over again; thankfully, once a certain point in the story is reached, the player is given the option to skip any Gummi ship stages they've already completed once.  The Playstation 3 and 4 updated versions (titled "Kingdom Hearts 1.5 Final Mix" also add in some challenges to each stage in order to add some rewards and break up the monotony, as well as encouraging the player to actually upgrade their ship instead of just coasting through the game using the default one.

In conclusion, Kingdom Hearts as a series is a definite odd duck, instantly invoking mixed feelings at how much it's strayed from its original concept and become a "cash-in franchise" with its continuously retreaded bosses and stages across eight games and counting.  That said, I still can at least consider the first Kingdom Hearts game a genuinely worthwhile experience.  While nothing outstanding, it is competently executed, charming, and quite entertaining to play, combining the fun atmosphere of Disney with the polished gameplay and design of a good Square adventure.  It stands as proof that a silly concept done well is always better than a strong concept done poorly. 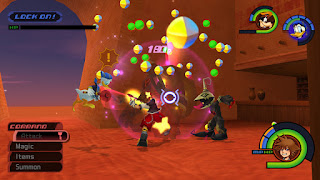 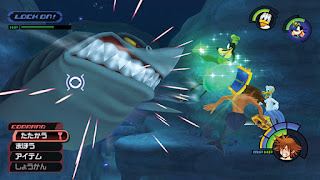 Developer: Square Enix
Publisher: Square Electronic Arts, Sony Computer Entertainment
Platform: Playstation 2, Playstation 3, Playstation 4
Released: 2002, 2013, 2017
Recommended version: The updated rerelease of the game on the Playstation 3 and 4 (released as  part of the 1.5 Remix compilations on PS3 and PS4) adds HD visuals, more polished gameplay (utilizing improvements from Kingdom Hearts 2) and some extra content not present in the original Playstation 2 release, like added boss battles and extra goals during the Gummi Ship stages.  That is definitely the one to play these days.
Labels: ⭐⭐⭐, 2002, Full Reviews
Newer Post Older Post Home