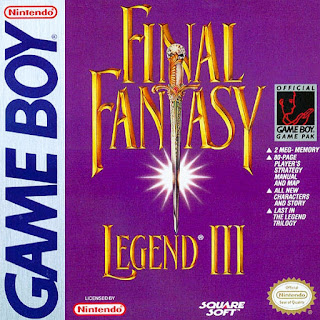 The third game in the SaGa franchise was the only one prior to 2015's Imperial SaGa (a browser game) to not feature any input from series creator Akitoshi Kawazu.  As a result of this, many of the elements of the previous two games which drew criticism were overhauled here, and the result is a more traditional, if rather generic, JRPG.

The most prominent change is that the game no longer features randomized stat growth after a battle; instead, SaGa III now operates on a traditional experience system, with experience points gained after battles and levels earned at set intervals that give an all-around statistical boost.  While arguably a defining element of the series, I actually like this change; it makes the overall experience considerably less grindy when you're getting guaranteed gains, whereas the original could subject you to long droughts with few or no significant improvements to your team.  Spells are more traditional Final Fantasy fare as well, with even some mainstays like Fire, Ice, Flare and Cure appearing here.

The monsters and robots of SaGa fame are still present in this game; however, they work on a much different principle here.  The player instead begins with a set team of two humans and two mutants, and they can transform after battles by eating monster meat or installing robot parts - installing a single part will turn them into a Cyborg, while a second part will turn them into a Robot.  Similarly, eating one piece of meat will transform that character into a Beast, and a second will make them a Monster.  Monsters act much like their SaGa counterparts, having high stats but being unable to use any kind of equipment, instead being limited to spells and "Talents" (innate abilities unique to each monster type).  Robots, also like their SaGa counterparts, gain stats by equipping items or using special capsules, but are unable to cast magic.  Beasts and Cyborgs serve as something of a hybrid, allowing the player to use some elements of their base class and monster class, but are typically less powerful overall than the extreme end of the spectrum.

This idea is interesting overall, but somewhat underdeveloped.  Many Talents, particularly those of monsters, just aren't really that powerful compared to the weapons and spells base classes can use, and at the end of the game using the four magical swords becomes an important part of the game's strategy.  Robots are also rather impractical for most of the game, as they begin with low innate stats and require a large investment in capsules to get them up to snuff.  Indeed, I found that Beasts and Cyborgs were the most useful classes overall, with the former having absurdly high MP toward the end of the game that made them perfect for spamming high-level magic.  Similarly, Cyborgs have basically all of the advantages of Robots but none of the downsides, and allow characters in that class to have high stats while still being able to cast spells when needed.

Building off of this, there is very little point in the variety of weapons the game provides.  The game continues to provide all of the SaGa hallmarks - martial arts, axes, swords, whips, et cetera - but unlike the previous two games, weapons do not wear down over time and only occasionally show special effects like being of a particular element or having damage based on a particular stat.  I mostly just ended up using whatever weapon a character could do the most damage with; in most cases, this just meant buying the biggest sword or axe and keeping my casters equipped with something that boosts speed so they can sneak in turns before the enemies.

Some other prominent elements of SaGa are retained here and work in the game's favor.  Exploration in the game is largely open-ended, for one; indeed, the first quest one finds in the game is to get the Float spell, which basically serves as the game's airship for the early stages.  Not long thereafter they get the Dive spell, which allows travel both over and under the oceans, where many hidden treasures can be found.  The game also retains the series' oddly sporadi encounter rate - fighting enemies literally every step while at other times you can wander for minutes without seeing a single battle.  But of course, neither seems to occur when you actually want it to.

Some clever new elements appear in the game as well.  The Talon is the most prominent of these, and is easily the game's most distinctive element.  Finding the ship's crew members and installing new functions is a major goal in the game, and it's cool to see how the Talon evolves over the course of the adventure - going from a threadbare ship that can't even fly to essentially a floating fortress, complete with its own inn, weapon shops, facilities and defensive weapons (getting a free attack in during random encounters before the fight even begins).  Pretty cool stuff, but sadly you don't get to use the ship's functions much at all until about two-thirds of the way through.

Final Fantasy Legend III is also another early example of a game with a crafting system.  Elemental stones found throughout the adventure can be crafted into powerful pieces of equipment or top-tier spells once the proper crew members are brought aboard the Talon, and these cannot be acquired in any other way.  These items are very limited, however (typically no more than about 6 of each in the entire game), so they should be spent wisely.

In short, the third SaGa game, while a more conventional and therefore more polished JRPG experience than its predecessors, is still very much a product of its era - level-grinding and drawn-out, one-note boss fights are still very much the order of the day.  For that reason it's a bit hard to recommend today, but I still point to it as the entry in the Game Boy SaGa series that holds up the best over time, and it's at least worth a look for its creative new take on the SaGa formula. 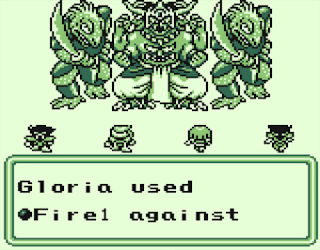 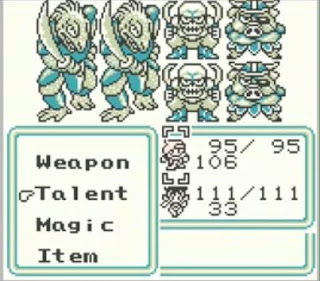 Developer: Square
Publisher: Square, Sunsoft
Platform: Game Boy
Released: 1993, 1998
Recommended version: As of this writing, the game has not been rereleased on any other format.  There is a DS remake titled "SaGa III: Shadow or Light" featuring 3D graphics, visible encounters and gameplay tweaked to be more akin to the SaGa games (randomized stat growth), but the original version remains a Game Boy exclusive.