Ogre Battle: The March of the Black Queen

Another under-the-radar RPG release on the SNES from Atlus, who at the time was mostly known for just that - niche games.  But is this cult classic still worth a look today, or has the Ogre franchise largely faded into obscurity for good reason? 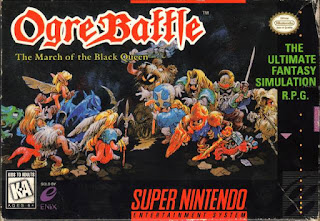 Ogre Battle is the first game developed by Quest to see a release outside of Japan.  A very limited one, as only about 25,000 copies were printed on the Super Nintendo, making it one of the rarest critically-acclaimed SNES titles in very short order.  It wasn't hard to see why it held so much appeal, either - Ogre Battle is a rare example of a real-time strategy game on a home console, carrying with it all the depth and strategic elements while sacrificing virtually nothing from its PC counterparts.

RPG elements are worked in as well, of course.  The player has the option to customize their leader through a choice of tarot cards in the intro, starting as a different class and with a higher or lower Reputation score depending upon their choices.  And of course, there are a large variety of generic, randomly-named units for the player to create and customize as they see fit - either changing their job classes, shifting them between units, or giving them a single piece of equipment to bolster their abilities.  More are unlocked during the campaign as the player's Alignment reaches certain plateaus and units reach certain levels, and others are unlocked by completing semi-hidden events (the Werewolf class, for example, is unlocked if a character is killed by the werewolf boss).  One particularly powerful class, known as the Princess, is especially hard to come by, requiring a very rare item that only seems to be dropped randomly during battles; should  you be lucky enough to get it, however, you will have a devastating back-row attacker that can hit all units in a battle at once and grants every character in your own squad (even herself) an extra turn just by being present.

The player can have up to nine squads, and each can be populated by up to six units (though some take more than one slot - most of the larger monster classes, for example).  Each squad also has a front and back row, with the units' attacks varying based upon where they are placed - Fighters, for example, may have fewer attacks per turn from the back row (or not be able to attack at all) while supporting units like Clerics and Archers are best placed in the back to grant them a measure of protection.  Mixing and matching to find the best combinations makes up a significant part of the game's strategy, as does knowing when to pay to bring in more units and when to conserve money for later rounds.

As in many games of this type, it is very much to the player's benefit to capture towns and cities as they progress along the map.  Not only does this earn them extra cash, but it affords them a new place to deploy additional units from and a relatively safe haven to heal up injured units.  The player is also given the option to draw a tarot card with each city captured.  These can be used in war battles (more on this in a bit), but additionally they grant random effects to all the units in the squad that liberated that city - either a stat boost, a raise to the army's Reputation, or even changing the time of day.  There is a drawback, though - several cards do have detrimental effects when drawn (dropping Reputation or lowering a stat) and some can affect your party in battle, such as the Sun card that deals damage to all units on the board, friend and foe (doing heavier damage the lower that character's Alignment is).

Unlike many strategy games, units as a rule have the ability to move anywhere on the map; however, most land units will go much slower over mountains, and nearly all non-aquatic units will go much slower over water.  Thankfully, the pathfinding in the game does recognize this, and as a general rule will always take the quickest path to a destination (generally by road, only straying off if there simply isn't a quicker way to get there).  There are many times where one will want to go straying off the beaten path, though - many hidden events and items are present on each map, and the only way to find them is to walk right over them.  In fact, this is the only way to uncover many of the best items in the game, as well as view all the events necessary to receive the game's best ending.

Encounters with enemy units are the closest the game gets to a traditional RPG, cutting away to a JRPG-esque combat screen.  Action during this time is largely automated (with units taking actions depending upon their class and position within the unit), though the player can pause to give new commands - either changing up who the units target, running from the fight, or using a Tarot Card (collected by capturing cities) to turn the tide in a variety of ways.  For example, using the Fool card will cause all of the enemy's units save the leader to flee, making him a much easier target.  The Empress will heal all of the player's units in the fight, while the Moon will switch the enemy's front and back rows, putting them at a disadvantage.  Some caution should be used with these, though - any enemy that dies from being dealt direct damage by a card's effect will cause the player's commander to gain the experience instead; as a general rule, having a high-leveled main character is a bad idea, as it lowers your army's reputation.

As you can tell from my explanations, there's quite a lot to Ogre Battle in terms of its design, requiring much careful planning in order to succeed.  That said, it is a rather slow-paced experience overall, and if you're going for the best possible ending, it will require a lot of luck and patience to get there, basically requiring you to find all of the game's secrets and carefully balance your army's Reputation as you make your way through 30 or so battles.  Still, fans of strategy games with RPG elements worked in should have some fun with this one. 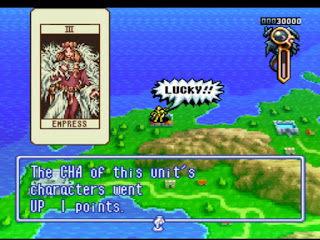 Developer: Quest
Publisher: Atlus, Square Enix
Platform: Super Nintendo, Sega Saturn, Playstation, Wii Virtual Console, Wii U Virtual Console, *New* Nintendo 3DS Virtual Console
Released: 1995, 1996, 1997, 2008, 2013, 2017
Recommended version: Currently the only versions available in English are the SNES version (also emulated on the Wii Virtual Console) and the Playstation 1 release.  The latter is the better version overall because, while it has load times before each combat segment, it also has a CD-quality soundtrack, a reworked (and much more polished) translation and the ability to save mid-battle, which helps on some of the longer stages.  It's also considerably cheaper than the SNES version, having had a much larger printing run.