Created in part by Ted Woolsey and Paul Reed, Shadow Madness was their second attempt to capture some of the RPG limelight after Secret of Evermore proved to be a divisive game.  But does Shadow Madness succeed where their previous effort failed, or does it too get relegated to obscurity? 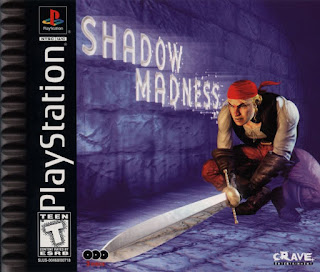 Secret of Evermore is a game well-known to RPG fans in the 1990s, being billed as something of a sequel to Secret of Mana despite the fact that it was produced by an entirely different studio and, other than the title and several gameplay elements, the two games ultimately shared little in common.  This led it to a mixed reception among gamers and relatively lukewarm sales, and as a result the studio behind its creation was dissolved by Square the following year.  To date, it remains Square's only game to be developed outside of Japan, as well as one of the first to seemingly be forgotten by them, never seeing another rerelease on any format and barely being acknowledged in any form since.

However, two of its developers collaborated once again, taking another shot at recognition among RPG fans.  Ted Woolsey and Paul Reed took the reigns on a new studio (Big Rain), attempting to develop their own RPG for the Playstation platform.  Financial troubles with their first publisher led to the game being picked up for publication by Crave Entertainment instead, leading to Big Rain changing its name to "Craveyard Studios".

Finally, after three years in development their game was released; a very Playstation-esque RPG named Shadow Madness.  It seemingly tried to mimic the visual style of Final Fantasy VII with its low-poly models on detailed 3D-rendered backdrops, as well as a number of full-motion videos conveying the story; however, this ended up looking dated even by 1999 standards, as Square had spent the previous two years making leaps and bounds in visual technology with games like Parasite Eve and Final Fantasy VIII.  The budget limitations the game faced are also much more apparent, with the most emblematic example being the map screen - a literal flat paper map which the model of your character walks across to reach new destinations.

Taking further cues from Final Fantasy VII, Shadow Madness attempts to work in a number of minigames over its runtime to add some variety to the proceedings.  The player is introduced to a lockpicking minigame early on, and later briefly takes the helm of a submarine in a first person shooting segment and helps to destroy a dam with a catapult.  Combat also works in timed hits a la Super Mario RPG, letting the player's attacks deal double damage if they press a button just before their attack lands.  As with its inspiration, these are ultimately nothing spectacular, but do at least add some variety to the game.

Shadow Madness also feels more than a bit dated in the gameplay department; while games like Parasite Eve, Suikoden and Final Fantasy VIII were attempting to put new twists on the familiar RPG formula, Shadow Madness unfortunately lagged behind, with its combat and overall gameplay ultimately feeling rather stock.  Items, equipment and elemental affinities all fit the usual RPG tropes with little to set them apart from any other game of their like.

Combat in the game draws inspiration from Final Fantasy as well, taking part in a system reminiscent of the Active Time Battle system that was a signature of that series at the time.  However, it does at least introduce some new twists.  Battle scenes operate on a grid, and the player's characters are required to be adjacent to an enemy in order to attack them with a melee weapon, requiring them to Approach before they attack.  However, enemies can also surround and gang up on the player, putting them at a disadvantage, so using the Retreat command to back up can spare them from heavy damage at times.  Three different types of melee attack are available as well; Guarded attacks do relatively little damage but give your character a higher chance to dodge enemy strikes for his next turn, Aggressive attacks do heavy damage but leave your character vulnerable, and Normal attacks fall in the middle, doing average damage but not leaving your characters as open to attack as an Aggressive strike.  Later in the game the player unlocks Twitch attacks, which allow for heavy damage if they are relatively adept at button-mashing.

What hinders Shadow Madness more than anything else, though, is its general lack of polish and challenge.  The game is just too easy, with overpowered accessories, spells and attacks being common sights in the game and enemies that generally pose very little threat for much of the adventure.  The maximum level in the game is also a very low 15, which you tend to hit long before the game is over; this in turn has the unfortunate effect of making the game's combat into a literal waste of time since you have nothing to gain by fighting anymore.  Even the developers were seemingly aware of this, as they give the player the option to avoid battles entirely by pressing the L2 and R2 buttons when they hear the telltale enemy roar that signals a battle, which nullifies most (but not all) random battles the game throws their way.

Fittingly for a game by Ted Woolsey, the game also tries to lay on the humor, with rather mixed results.  While it does get a chuckle here and there for its irreverent attitude and some actually pretty funny jokes, it never really turns it off either, which makes it difficult to take the gravity of the story seriously.  Moreso since the game is constantly accompanied by a rather bleak soundtrack and near-constant sights of death and decay, with your characters continuing to crack jokes throughout and seemingly never taking much of anything seriously, even when their hometowns and families are involved.  The only time this felt perfectly on-point was was Harv-5, the robot character whose dry comments fit in perfectly with his lack of emotions and analytical approach to virtually everything.  I'm all for adding levity to an otherwise dark story to stop it getting too grim and depressing, but it has to be a) well-placed and b) used sparingly, least it undermine the heaviness of the situation.

When all is said and done, Shadow Madness is nothing if not ambitious, with Craveyard seemingly attempting to make their own Final Fantasy VII on only a fraction of that game's budget.  The end result is a very uneven experience, with clever bits of writing masked between a lot of just-barely-passable gameplay, pretty ugly graphics and overall generic design.  If one can endure all of that in pursuit of its stronger points, then Shadow Madness is probably worth a look.  But if not, those looking for a more satisfying experience on the whole have plenty of better options on the Playstation platform. 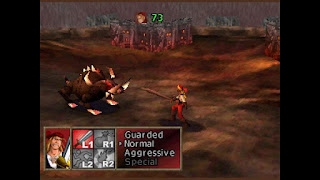 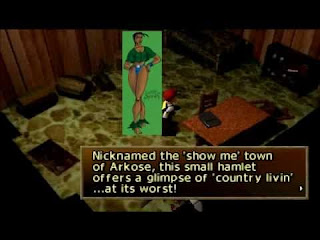 Developer: Craveyard Studios
Publisher: Crave Entertainment
Platform: Playstation 1, PC
Released: 1999, 2022
Recommended version: The game was 'ported' to Steam in 2022, in that it's the original PS1 game running inside a PCSXR emulation.  One can access a menu by pressing the Escape key, but it has frustratingly few options for resolution settings and even requires you to 'swap discs' via a key input once you reach a certain point in the story, rather than doing so seamlessly.
Labels: ⭐½, 1999, Full Reviews
Newer Post Older Post Home