An obscure Famicom-exclusive RPG released only in Japan, overshadowed by other releases of its year in Final Fantasy, Phantasy Star and Dragon Quest II.  But does Another's only entry to the genre prove to have some merit, or is this one mostly forgotten for a reason? 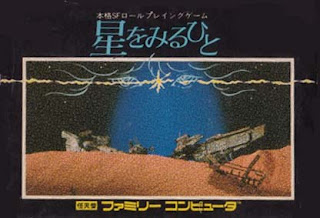 I do my best to find something positive in each game I review; even if I don't personally enjoy playing it, there is usually at least one element I can point to and say "well, at least this was decent".  But with that in mind, I feel I can safely say that Hoshi wo Miru Hito (which translates to "Stargazers" or, more literally, "Those who look at the stars") is a rare example of a game that I can find no redeeming qualities in whatsoever.  I make this claim without hyperbole - Hoshi is a fundamental failure of game design in almost every way it possibly can be.

It doesn't take long to see a few of its flaws, either. The rigid tile-based and overly busy visuals give the game a very messy and cluttered look that isn't appealing to look at in the slightest. That, paired with the wretched music that seems to hit a shrill note every other second and loops every twenty seconds or so, puts a bad taste in your mouth right out of the gate.

But unappealing aesthetics are only the tip of the iceberg of Hoshi wo Miru Hito's badness.  The game's design as a whole also shows several glaring flaws from the outset; there is no introductory sequence to get the player acquainted with the game's plot or setting (being entirely relegated to the manual - and inaccurate to boot), and the first town in the game, while only a step to the left of the starting point, is not visible on the map.  The game attempts to justify this by saying that it's a town of psychics who are masking their presence from the outside world, which in itself isn't a terrible idea; Zelda II actually features a very similar puzzle at one point in its story, requiring the player to decipher some clues and acquire an item to reach it.  However, having an invisible town as the first major location in the game - one's only refuge from a hostile world in its early hours - is an astonishingly boneheaded move.

But even putting that aside, the game as a whole is replete with amateurish flaws in almost every respect.  Unlike virtually other game of this type, the player begins with no equipment or money whatsoever, forcing them to fight monsters with their fists and pray they survive long enough to buy some equipment and items.  This proves to be a problem in itself as, owing to a bug, the first weapon the player can purchase actually lowers their attack power, making them all but worthless until it is replaced. Weapons also cannot be unequipped unless a new weapon is purchased, and once it does, the old weapon is discarded immediately, never to be seen again.  Reselling weapons - another staple of the genre - is out as well, as you don't get any of your money back once you upgrade your equipment.

I use the term "pray" in regards to the combat, because it too proves to be messily-designed to the point of inanity.  Again discarding a common RPG trope, there is almost no difficulty progression to the game's encounters - right from the get-go, it is possible to meet enemies well above the player's level who can easily stomp them into the dirt, or hit them with a paralyzing technique that has a 100% success rate, doesn't fade on its own, and can only be cured with a spell or relatively expensive item (both of which are out of reach at the start of the game).  There is no Run command and no immediate "Game Over" when all of the playable characters are incapacitated, either, which means that if the player encounters either of these enemies, they're forced to either slowly watch them whittle down their HP to nothing or just reset the game.

But even if one manages to endure all of that, the dungeon crawling experience proves to be just as incompetently handled.  Not only do the ridiculously difficult encounters continue into them, but keys aren't handled in the traditional RPG sense either.  Instead, the player must purchase expensive key cards to open each door they encounter, which are strictly one-use items.  Should you run out of them mid-dungeon, you can easily become trapped with no means of escape, forcing you to reset the game once again.  But more baffling is the fact that items required to finish the game aren't placed in traditional RPG chests, or even visually indicated at all - instead, the player steps on an unmarked space on the dungeon and the item is automatically added to their inventory, with the only clue to this occurence being a small sound effect (which, considering how bad the music is, can be easily missed if you mute your television or just aren't paying enough attention).

These on their own are all bad, but not deal-breakers, per se; one could theoretically adapt to them and make their way through the game in spite of its serious problems.  However, some embarrassing and, dare I say, amateurish flaws further mar the experience.  The most noticeable of these is the player's atrocious move speed, which causes them to move about the maps at a glacial space (roughly two tiles every second - ridiculously slow even compared to other contemporary games).  The battle screen inexplicably truncates the last digit from the playable characters' HP meters, leading to confusing moments like having 5 HP, taking 18 damage, and being left with 3.  There is no way to back out of a combat menu once a player enters it, committing them to use an item or spell if they go into that one by mistake (and if they don't have one to use, they end up wasting a turn).  Exiting any location in the world, regardless of where it is, puts you back at the game's starting point, which results in a lot of unnecessary and frustrating backtracking when you're trying to advance through the game in any kind of logical fashion.

But Hoshi wo Miru Hito's most egregious and fatal flaw has nothing to do with its gameplay itself, but with a fundamental aspect of the genre as a whole.  The game utilizes passwords to save the player's progress through the game; an outdated design element even at the time of its release as games were rapidly moving into battery or disk backup solutions as a means to mitigate player frustration.  But even if the player copies down the password perfectly and puts it in after they die, and no matter where they saved or how far in the quest they'd gotten, they restart at the beginning of the game at level 0.  Oh, they might not have to find a few items or visit some key locations again, but they have to restart the entire game-spanning process of building up their character from scratch again, hoping all the while that a random encounter doesn't wipe them out and set them back to zero.  I cannot stress enough how much tedium, length and sheer frustration this adds to the game experience; it essentially turns the entire game into a very long test of luck, rather than any legitimate skill, problem-solving or patience, and I'd honestly be amazed if anyone has ever completed it without utilizing cheats or save-states.

In all honesty, there's not much I can say to conclude this review that hasn't already been said about Hoshi wo Miru Hito; it's a frustrating, poorly-planned experience with a number of grievous flaws, but its broken save system is easily the worst of all, rendering the game all but unbeatable in its unmodified form.  I should note, however, that in spite of everything, the game is a small cult hit in Japan, inspiring several improvement patches that, among other things, fix a few of the more egregious bugs, improve the graphics to more Famicom-esque standards and put in a functional save system that even tracks the player's equipment and levels.  There is even a full fan remake for the PC, released for free, which polishes up the game to modern standards in every respect and even includes a proper final boss battle - something else conspicuously absent from the original game.  So, while I can personally see no good in this mess, there are clearly some gamers out there who can. 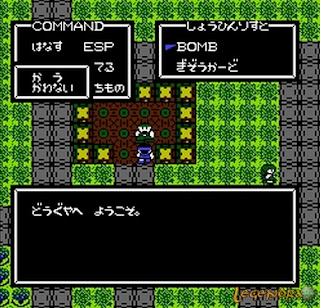 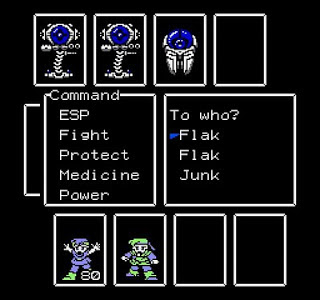