100 reviews, baby!  Let's do something special.

A highly acclaimed game from Squaresoft with an action anime bent, as well as the game which arguably sparked much of their popularity that persists to this day.  But is Chrono Trigger a game that stands the tests of time, or this just a piece of history and little else? 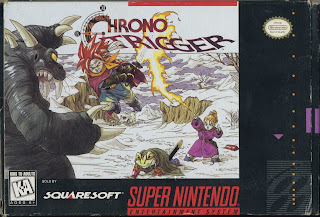 Chrono Trigger is a game that needs no introduction; in fact, doing a review of it at all almost seems redundant.  Almost everyone with a remote interest in RPGs has probably played it at some point, and acclaim for it from those who have is virtually unanimous.  Not only did it provide a highly polished and fun experience for both die-hard RPG fans and more casual gamers, but its presentation was nothing short of fantastic, feeling more like an interactive cartoon than a video game - no mean feat considering the limitations of the platform it was released on.

Visually, the game was a treat to behold, with intricately detailed, imaginative backdrops and environments by Tetsuya Takahashi (who would later make a name for himself with games like Xenogears and Xenosaga) and character designs and animations by Akira Toriyama of Dragonball fame.  The latter's energetic style lent very fast-paced, actiony feel to the game on the whole, but particularly its action scenes - characters would actually unleash flashy sword combinations, throw projectiles, or perform elaborate tag-team moves on opponents, and it was all fully animated, which was quite a step away from other RPGs of the time that featured static sprites for most of the enemies, and even the protagonists in most cases.

The gameplay lent itself to this feel as well, essentially being a somewhat simplified, but faster-paced, Final Fantasy title at its core.  Encounters were no longer random, which was a substantial leap for RPGs of the time - instead, enemies were visible on the game's various maps, and many could be avoided by simply outmaneuvering them as they moved about, cutting down on the tedium of the game.  Running from combat, while a roll of the dice in most earlier RPGs (and seemingly always failing at the worst of times), was now a much simpler affair, allowing the player to hold the shoulder buttons for a few seconds until they escaped the battle (and not causing them to waste valuable turns in fights where it wasn't possible).

While characters generally had a much smaller selection of skills and spells to utilize individually, Chrono Trigger was also one of the earliest examples of a game to utilize collaborative attacks between characters.  Two or even three characters, equipped with the proper skills, could combine their attacks together into a Dual or Triple tech that played a fresh new animation and usually had a much greater effect than the two skills would separately.  For example, Crono and Frog could combine their Slurp Cut and Cyclone skills to perform "X Strike" and deal heavy damage to a single target, while Robo and Frog could combine their respective healing skills together to fully heal the party.  It's a clever mechanic that, while done in some earlier games, was arguably first taken to its full potential here, adding much to the actiony feel of the game.

Chrono Trigger was also an early example of an RPG which utilized mnigames not just as a means to add variety to the gameplay, but to serve some elements of the story.  Many of these are largely optional and mostly just included for fun; little surprise, as the player's introduction to most of them is at the Millennial Fair only minutes into the game, where they can win Silver Points to trade in for various prizes.  Others do serve a bit more of a purpose, however, such as the racing minigame in the future (slightly reminiscent of the F-Zero games with its Mode-7 graphics) or the hunting minigame in 65,000,000 BC, where various items can be collected from enemies and traded for useful equipment.  While ultimately nothing outstanding, these helped to set the game apart from its contemporaries and helped to blur the line between "video game" and "cinematic experience" in the RPG genre.

Further helping with that was the game's fantastic audio design.  The sound effects and general feel of combat are punctuated by its sounds, with everything from gunshots to sword slashes to heaving waves of flame actually sounding the part and lending themselves to the game's hard-hitting action bent.  But more than that, the soundtrack in Chrono Trigger is utterly fantastic.  Headed by Yasunori Mitsuda, who would go on to become one of the most prominent names in video gaming music, Chrono Trigger certainly does not disappoint in any respect.  From the foreboding ambience of Magus's Castle to the peppy Millennial Fair theme to the high-stakes boss battles, every track perfectly fits the mood and draws the player into the game's world.  Few games before this one had made me forget that I was playing a video game so effectively as this one, with the audio design in particular really helping to draw me into its world.

Only further helping with that was that this was one of the earliest RPGs I'd played where your choices actually have a tangible effect on the game's outcome.  While this does play out to a degree in the game's time travel element (being able to change events in the past to affect the future), this was also an early example of a game with multiple endings.  Depending on the player's choices throughout the game, the events of the main ending would change significantly.  A number of alternate endings are also available, primarily determined by the time in the narrative the player chooses to confront and defeat the final boss.  Many of these are rather jokey in tone (such as seeing a future where the primitive Reptite race eventually rises to become the planet's dominant species), though some reveal interesting alternate outcomes for the game's storyline.  This, paired with it being one of the earliest games I can think of to implement a "New Game Plus" option (carrying over the player's levels, items and stats to a fresh playthrough of the game) lent Chrono Trigger substantial replay value and longevity compared to most RPGs of the time.  It was also somewhat interesting to see Chrono Cross actually adapt many of these alternate endings into its storyline, though as I mentioned in that review, its actual execution of that concept left much to be desired.

So, does Chrono Trigger really deserve all the acclaim it got in its day and continues to get in the modern era?  Well, you're certainly not going to hear me argue against it.  Its excellent presentation, simplified but enjoyable gameplay built on the Final Fantasy model and open-ended design that lent itself to heavy replayability made it a landmark title in the 90s, and it remains a highly enjoyable one today, holding up astonishingly well to the test of time.  It's not a flawless experience, of course - an overall low difficulty level and occasionally unclear objectives being its two main faults - but it's arguably the closest to perfection that Square has ever gotten.  I'm honestly a bit surprised that this hasn't become as much a pillar of Square Enix's business as the Final Fantasy, Dragon Quest and Kingdom Hearts franchises have. 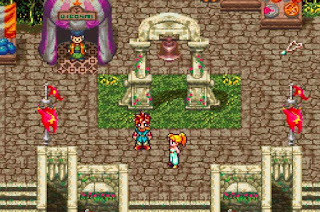 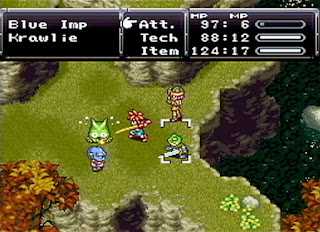 Developer: Square
Publisher: Square
Platform: Super Nintendo, Playstation, Nintendo DS, Wii Virtual Console, iOS, Android, Windows
Released: 1995, 1999, 2008, 2011, 2018
Recommended version: In all honesty, the Super Nintendo version of the game remains its definitive release in my opinion.  While later ports added in some content such as FMVs for key story scenes or added levels to tie it in better to Chrono Cross, they also brought their own problems along.  The Playstation port in particular suffers from terrible loading times between fights, while the Nintendo DS and later versions have a redone translation that removes a lot of the character and charm that the Super Nintendo version brought.  The IOS, Android and Windows ports also feature a redone interface that I find unappealing, ill-advised attempts to add filters to the game's graphics to update it to "modern" standards, as well as introducing several new bugs.