Jade Cocoon: Story of the Tamamayu

Coming out on the heels of Final Fantasy VII and Pokemon, Jade Cocoon represents Genki's attempt to cash in on two popular giants in the RPG genre in the late 1990s.  But does the tale of the Tamamayu prove to be a worthwhile one, or is this just another forgettable copycat? 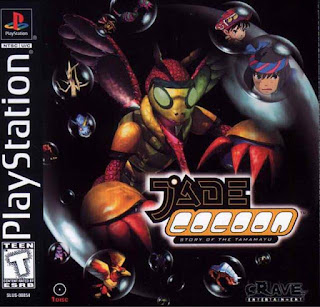 Jade Cocoon was the first (and to date, only) RPG franchise by Genki, a company mostly known for making racing games.  However, they certainly made a valiant effort to create a game that would hold its own against other RPG giants of the time.

For a start, the game has quite an impressive budget behind it.  Not only does it have a full complement of FMV videos and prerendered backdrops for the story to take place against, but character designs and animation direction are provided by Katsuya Kondo, who made his name as a  designer and storyboard artist on Studio Ghibli productions.  Also unusually for the era, the game featured professional voice actors even in its English incarnation, with a few prominent names like Michelle Ruff, Brianne Sidall and Richard Epcar lending their voices to the characters.  A surprising amount of the dialog is voiced as well - even much of the incidental dialog with minor NPCs has voiceover behind it.  Cutscenes are even able to be skipped, which, believe it or not, was a fairly rare concept in the era in which Jade Cocoon came out.

Another nice changeup (in my book at least) is that the game does not feature random encounters - enemies are always visible on the map, allowing the player to engage or avoid them at their leisure.  Most of the time, at least, as Jade Cocoon also makes the odd decision to utilize Resident Evil styled "tank controls" rather than freeform movement; in short, rather than simply pressing a direction and moving in it, the left and right buttons cause your character to rotate in that direction, while pressing up moves him forward and back moves backward.  While this does aid a bit in navigation (allowing the player to keep their bearings as the camera cuts to new angles), it can prove annoying at times too, as it makes it considerably more difficult to maneuver around enemies in some situations.

Jade Cocoon at its core is a monster breeder/combat style of game, so like Pokemon, a significant emphasis is placed on capturing and breeding new monsters (referred to in-game as "minions").  Levant himself can fight as well, but this is of limited use as he has minimal combat options and gains no stats from levels.  Instead, his primary role is either as a supporter (healing his minions with items) and of course to subdue weakened monsters, executed by using his Capture Flute; the lower their HP, the higher chance they have of being successfully captured.  As more monsters are defeated, his "capture level" will increase, allowing him to capture and control progressively stronger creatures.

Minions themselves operate somewhat similarly to the Pokemon games, having innate traits, elemental affinities, status resistances and special attacks.  However, the player doesn't get to use them immediately after capturing them; instead, they must return to the village and have the creature's cocoon "purified" to bring it under their control (or converted into cash).  Once under the player's control, they can be summoned in battle to fight other monsters and gain new skills and stats by earning experience points.

Jade Cocoon draws some elements from the Shin Megami Tensei franchise as well, as a significant portion of the game's strategy is focused around fusing captured monsters into newer, more powerful ones.  These can be slightly powered up variations on your existing minions, carrying over some of the moves, stats and elemental affinities of their parents, but some combinations will also result in completely new creatures, carrying over some traits of their parents but having their own new movesets as well.  This gets taken even further in the postgame, where the player is given the option to customize their monsters with new skins as they venture through an endless labyrinth and face progressively stronger enemies as they go.  All in all, there are some 175 minions and variants thereof to collect in the game, though it is unfortunately not possible to get them all in a single playthrough as some share a slot on the Minion List and will prevent the other from being acquired once collected.

Alongside the main campaign, there is also "arena battle stage" where players can pit their monsters against those of their friends, pulling data from their respective memory cards to make two teams of three monsters each.  This mode even has a hint of a story behind it, as well as character narration throughout the battles, showing a surprising level of polish for something that is, for all intents and purposes, a minigame.

In the end, Jade Cocoon is an interesting, if not outstanding, take on both story-driven JRPGs and monster breeding sims.  While not the deepest of these kind of games, nor the most diverse in terms of design, its high production values and well-crafted fairy tale atmosphere make it clear that Genki was putting effort into making something interesting and not just trying to churn out a low-quality cashin for a quick buck.  If you're not a big fan of this style of game then Jade Cocoon likely won't do much to change your mind, but if you've already played through Pokemon, Monster Rancher, Dragon Quest Monsters, Shin Megami Tensei and Dragon Seeds and are looking for another game with mechanics in that vein, Jade Cocoon will probably be one you want to check out. 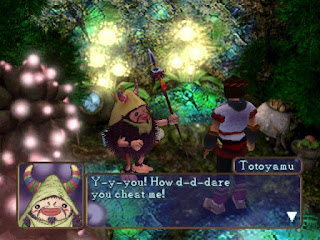 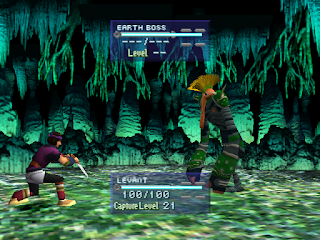 Developer: Genki
Publisher: Crave Entertainment
Platform: Playstation 1, Playstation Network
Released: 1999, 2008
Recommended version: The game was given a rerelease on the Playstation Network, though only in Japan.  As of the time of this writing, the only way to play the game in English is on the original Playstation.