A sequel to a collaborative RPG project between Level-5 and Studio Ghibli, which takes its overall design philosophy and gameplay in a much different direction.  But does Ni no Kuni II manage to provide the same sense of wonder and fun as its predecessor, or does this shift drain the franchise of its magic? 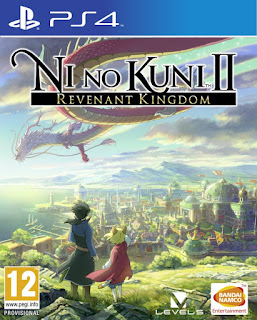 2013's Ni no Kuni: Wrath of the White Witch was a treat for fans of classic JRPGs, combining a relatively straightforward storyline with the charm, gorgeous animation and child-like imagination of a good Ghibli film, and even restoring some long-neglected early elements of the genre like a dedicated "world map" to explore between major locales.  Its emphasis on monster-gathering and training also gave it a slight Pokemon vibe, introducing strategy in utilizing the right monsters in the right situations and quite a lot of depth as they attempted to, well, collect them all.

However, it was not without its problems.  The game's party AI was very lacking, with frequent instances of characters running headlong into enemy attacks or quickly wasting all of their MP, leaving them without the use of spells when they desperately needed them later (ie boss fights).  It also quickly got steeped in busywork, particularly in its postgame quests that were centered more on empty level grinding than anything else.  For that reason, while it was a game I enjoyed playing, it wasn't one I cared to get 100% completion on (and to date have still not revisited).

Its sequel, on the other hand, seemingly takes the opposite approach of its predecessor on almost every front.  The monster training aspect of the game is now greatly downplayed, with the wide variety of monsters being pared down to several variations on "Higgledies" which generally play a minor role in combat - providing party buffs, dealing minor damage to enemies, or healing characters as long as they remain within a small circle (or, on rare occasions, tossing the player a powerup that will boost their damage output and give them unlimited MP for a short time).  The main characters are now the primary combative force in the game, utilizing their own sets of skills and elemental affinities primarily granted by equipment.  A traditional spell system is also absent here, instead having the player build up their magic gauge through physical attacks, which they can then spend to utilize a powerful special move with their melee weapons (which also have their own charges that build up over time), or attack from afar with a ranged weapon.  Melee weapons have their own meters to charge as well, and once they are at 100%, that character's next special attack will get a "Zing", adding extra damage and an elemental effect.

Thankfully, this new emphasis also comes with game balance geared much more toward it.  Party AI is much less of a detriment this time as the player can freely switch between their three active characters on the fly, and inactive ones are rarely actively targeted by enemies (but can still be damaged, particularly by their larger spells).  They also will not spend magic or weapon charges without the player's input, keeping them available for later in the fight where they will be needed.

Not content with just one type of gameplay, though, Ni no Kuni II also works in elements of games like Suikoden, Dark Cloud and Diablo.  The latter is particularly evident in the game's equipment system; enemies frequently drop various types of weapons and armor with randomized elemental properties or resistances to certain status effects, with the most powerful ones generally appearing as either quest rewards or just especially lucky drops.  One of the primary quests in the game is to build up the player's own kingdom and staff its various facilities accordingly, which leads to a large number of sidequests to recruit various characters.  This in turn allows facilities to continually generate revenue and items, as well as do things like craft new weapons, armor and items of quality well beyond what can be purchased in shops or found at random.  This actually culls a bit of design from the real-time strategy (or, less auspiciously, mobile games) at times, as researching new technologies at your facilities is all governed by a clock that counts down in real time, subtly encouraging the player to turn their attention to other pursuits until it's finished.  Impatient players can spend more money to speed up this research, but as this quickly depletes your limited money reserves (particularly early on), it's generally better to undertake sidequests or advance the story whilst you wait.

This is not particularly hard to do, either; not only are there plenty of story and town-building quests to undertake, but there are a number of randomly-generated minor tasks to undertake as well, usually in the form of gathering X amount of a particular resource or defeating a number of minor enemies.  These grant the player special coins which can be exchanged for uncommon resources, or simply traded in to get clues for new characters to recruit for their kingdom.  This also never felt particularly chorish, as every time I checked in I had plenty of extra resources to trade from just fighting various battles around the world, which allowed me to quickly gather leads on characters and devote my game time to more productive pursuits than simple resource farming.

The Suikoden influence expands into Ni no Kuni II's combat as well, with a number of story scenes (as well as optional ones) taking place in full-fledged war battles.  These play out largely in real-time like the main combat system, though with a strategic bent somewhat reminiscent of the Fire Emblem games - melee units utilize a rock-paper-scissors styled system of weaknesses and strengths, with spearmen having an advantage over swordsmen, swordsmen strong against hammer-wielders and hammer-wielders strong against spearmen.  Other units appear as well, generally utilizing ranged atttacks that can deal heavy damage at a distance but are weak against all melee attacks, and shield-bearers, which are strong against all attacks and primarily serve to draw fire away from other units.  Throughout these fights, the player must manage a resource called "Military Might" which can be spent to replenish the ranks of weakened/defeated units, or spent in moderate quantities to utilize Battle Tactics that can give the player an edge - erecting cannons, providing a temporary attack boost or dropping a bomb barrage on distant enemies just to name a few examples.  Generals must be leveled up as well, which at times can mean fighting a few warm-up battles at respawning war battle points in order to get them up to speed; however, I didn't particularly mind this as, like most things in the game, war battles are well-paced and rarely take more than a few minutes to complete.

In the end, Ni no Kuni II is a definite oddball among RPG sequels.  While it keeps the fundamental feel of a Ghibli project quite well, its gameplay and premise is almost entirely overhauled from the first game.  Its focus on building up towns, funneling resources into more useful ventures and undertaking huge amounts of side-content is much more reminiscent of a modern western RPG than a traditional JRPG, and its focus on large-scale war battles is certainly unlike anything undertaken by either Ghibli or Level-5 to date.  However, it plays well to Level-5's strengths - providing plenty of content while remaining well-paced enough to be addictive rather than tedious - and as a result, I find it to be a much more fun game overall, if not as memorable on a storytelling front. 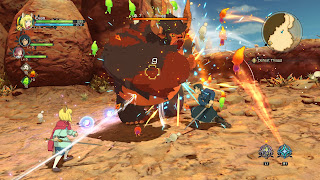 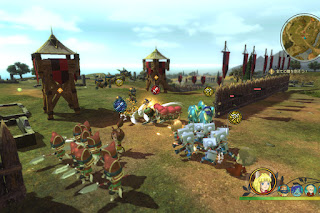 Developer: Level-5
Publisher: Bandai Namco Games
Platform: Playstation 4, PC
Released: 2018
Recommended version: While I have only played the PC version, the game seems to be almost identical on both platforms.  I've also encountered no major issues with the PC port - occasional minor framerate hitching in the more bustling towns is a nuisance, but not a deal-breaker by any means.