Valkyrie Profile was Tri-Ace's first attempt to break away from their Star Ocean franchise and try a new style of gameplay that combined elements of action, platforming and fighting games into the RPG formula.  But does Valkyrie Profile succeed in doing so, or is it just a game that, like Star Ocean, tries to do too much and ultimately collapses under its own weight? 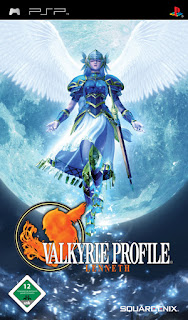 Tri-Ace was, at least in the '90s, a relatively unknown company.  Consisting of developers who split from Wolf Team (who would later be absorbed by Namco and create the Tales series), they made a splash in Japan with Star Ocean, a game which utilized an action-oriented combat system and even had some digitized voice samples, as well as a small dating sim element (with different scenes throughout the game and endings appearing depending on the player's affinity with the rest of the cast).  Star Ocean 2 would later be released in North America, keeping the same general idea while also adding in an Elder Scrolls-esque crafting system, and while Star Ocean 2 was only a modest success, it drew a loyal fanbase with its combination of eastern and western elements and significant replay value.

Valkyrie Profile was Tri-Ace's next effort, which once again attempted to combine some elements of sidescrolling platformers and western RPGs into the mix - missions and recruitable characters were randomized each playthrough, and many enemies in the game could only be reasonably damaged by utilizing certain weapon or spell types (more than a little reminiscent of games like Dungeons and Dragons).  The game's combat system was also a significant departure for an RPG, combining some elements of a fighting game into a turn-based system.  Each of the four characters (Einherjar) in the party is mapped to one of the four face buttons, and pressing that button in combination with the D-pad will cause them to use one of three different attacks.  However, with properly timed attacks, one can create some impressive combinations, earning damage multipliers as the combo grows longer.  A power bar is also present, allowing the player to unleash a character's super move at the end of a combo that adds a large amount of extra damage and hits.  Considering that there are a grand total of 21 characters to utilize and it's impossible to see all of them in a single playthough, this adds quite a bit of depth and visual flair to the game and is easily its strongest aspect.

Other aspects of the game are less well-handled.  As mentioned, story events and dungeons in the game are not fixed, but instead randomly awarded to the player by pressing Start on the map screen.  These random events often lead to a new character, but other times may just be a randomly-generated dungeon with enemies that tend to be far above the player's level and can wipe out the party in an instant.  In an ill-advised way to offset this, the player is occasionally given (or can buy) weapons that can instantly kill some stronger enemy types (the Dragon Sword, for example, will do massive damage to Dragons); however, these have a high chance to break each time you use them, which quickly leaves you high and dry or burning through your extremely limited currency in short order.

Not aiding these matters either is the fact that one is given only a set amount of random events per each chapter, and once they've gone through three or four, they are basically left with nothing to do (even level up) for the rest of the period. There aren't any extra dungeons that are always available, and towns seem to have no purpose whatsoever as townspeople do not divulge important clues nor sell any useful items.  Several times I found myself getting stuck in the later chapters because randomly-awarded missions in earlier chapters didn't give me enough experience to survive my way through, even though I went to the trouble of killing every enemy I encountered.  Limiting the experience one can gain is never something I like in an RPG, and Valkyrie Profile is one of the big reasons why - when paired with its random events, it's completely up to luck whether you do well in the next chapter or fall behind and get slaughtered by any random battle you run across.  This only gets compounded further in Hard Mode, where the starting levels of all Einherjar are all set to 1, requiring the player to get them caught up in order to make them a viable fighting force (not the easiest thing when they're so weak that basically any enemy attack will kill them instantly).  Even Event Experience (awarded to the player after defeating a boss, which they can then distribute among their party any way they wish) doesn't really help much with this.

Further compounding this frustration is the backstory, which dictates that you train your characters and then send them to fight in Ragnarok; this permanently removes them from the party, denying you access to their skills for the rest of the game.  Simply not doing this isn't an option, either, as if the war starts going too poorly you'll get into a fight with Freya, and whether you win or lose, the game ends right then and there with the worst ending.  Making things worse is that the path to the good ending renders the war entirely meaningless from a story perspective, which only leaves me wondering why this mechanic exists when all it does is actively hinder your experience and trick you into wasting valuable resources.

The best ending is itself another detriment to the game; in order to reach it, one needs to acquire a specific "Seal Rating" at a very specific juncture in the game, send a specific Einheirjar (one of the very few that a player is guaranteed to get in a given playthrough) at a specific time, take specific items out of "forbidden" chests they've been thoroughly warned away from by that point,  and win out against a rather tough late-game boss; if any of these cues are missed, they are locked into either the neutral or bad endings.  Worse, the game provides absolutely no clues for any of this, all but requiring the player to have a guide handy if they want to get through it; to say nothing of being strong enough to beat the boss, which is completely up to a roll of the dice.  But even if one does all of that correctly, the final boss gauntlet is absolutely, insanely difficult to overcome - I still to this day have never beaten that dragon that spews gouts of flame that do enough to wipe out my entire party in a single turn.

But of course, the developers (and their fans) are all too eager to tell you that it's your fault, not the game's, when it fails to give you enough experience to level up.  And that there is an item crafting system in the game.  And that it's so obtuse and badly-explained that it basically requires another guide in itself.  And, of course, that you need to use the ice crystal ability in the platforming segments in an extremely specific way to create ice towers to reach high treasure chests that are either positioned far out of reach or offscreen entirely, so you'd never know they were there unless you went to the trouble of exploring every innocuous nook and cranny for valuable items, which are apparently your only chance of victory in the final gauntlet.  Maybe that's fun to you, but I certainly don't enjoy basically having to cheat in order to complete a game; no thanks.

So the game is badly balanced and almost entirely up to chance, but surely the storyline makes the constant resetting and restarting worth it, right?  Tee hee, no.  Of course not.  There's very little in the way of development for any character other than the main one (Valkyrie Lenneth herself), and what little there is only shows up in the opening cinematics, sporadically through the guaranteed story scenes, and at the very end of the A Ending path, which, as mentioned, requires the player to jump through tons of ridiculous and obscure hoops to reach.  And when you finally get there, it's short, unsatisfying and doesn't answer any of the big questions in the story.  So no, not even Valkyrie Profile's story can save it, nor make it worth the effort to play.  It's not aided by some laughably bad voiceover or cheaply-animated anime cutscenes, either.

When all is said and done, Valkyrie Profile was a major letdown.  While it makes a strong first impression with its dazzling visual effects, amazing music, creative combat system and unconventional mechanics, it doesn't take long before one realizes that completing the game is essentially a matter of memorizing a player's guide and being extremely lucky in order to be strong enough to face the final trials.  That, paired with the lack of a decent storyline or memorable characters, made this just another bad Tri-Ace game that I had no interest in completing.  But at least it never crashed on me or corrupted data on my memory card, unlike their other big game of the time (THANKS, STAR OCEAN 2).