Phantasy Star Generation 1 serves as a remake of the first Phantasy Star game for the Playstation 2, as well as the start of the Sega Ages line of remakes and ports for the platform.  But is this remake a worthy upgrade to a classic, or does the original stand up better? 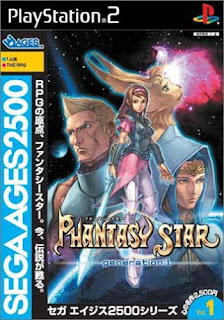 Phantasy Star is an undeniable classic among long-time genre fans; not only did it feature surprisingly colorful, smoothly-animated visuals for an 8-bit platform (especially compared to its main competitor, the NES), but it was a well-crafted adventure on the whole, telling a tale of revenge set in a world that drew both fantastic and science fiction elements, and bore more than a few intentional similarities to Star Wars.

Naturally, as acclaimed as the game was, it would get a number of ports to various platforms over the years in various compilations on the Saturn, Game Boy Advance, Playstation 3 and Xbox, and Nintendo's Virtual Console.  In the midst of those, however, a Japanese-only remake came out on the Playstation 2.  Masterminded by a Sega/D3Publisher joint venture called 3DAges, the game was actually a complete remake of Phantasy Star.  Taking the familiar game's storyline and overall design, it was redone with true 3D visuals,  higher-definition sprites, animated enemies and character portraits.  However, like many of D3Publisher's games, it has a distinctly low-budget feel to it - there are no FMVs for story sequences, the 3D overall looks rather generic, and there are very few instances of animations where there were none in the original game. Similarly, the music is done in simple MIDI format (no CD-quality tunes here) and there is no voiceover or similar additions.

Some effort has been made to flesh out the story and characters, at least.  Plot scenes have largely been extended to give the characters more dialog, and there is now a Talk feature similar to Phantasy Star IV's, where the characters will banter about the current objective or just exchange some bits of humorous dialog.  Other small references to later games creep in as well, such as having to buy items to translate Motavian and Dezorian speech (not a factor until the second game in the original series) and having more inter-party dialog during town interactions.  Another interesting addition is that if the player completes the game and keeps a copy of the save file on their memory card, they will unlock some extra content in Phantasy Star Generation 2, including an extra quest to revive Nei.

However, other obstacles have been added in 3DAges' attempts to update the game.  One especially prevalent one is the obtuse plot flags - the player must often to talk to several NPCs multiple times, sometimes within the same visit, to flip arbitrary plot flags in order to allow acces to the next area of the game.  On more than one occasion I found myself moving to the next area only to find that I wasn't able to enter or locate a key item there because of a missed conversation, forcing me to backtrack to previous towns and talk to everyone again.  In some particularly grating instances, this can even require re-traversing entire dungeons.  A very unnecessary and annoying addition that plagued me throughout the experience.

Another unwelcome change is the game's ill-advised attempts to add length to the game.  Phantasy Star Generation 1 is ironically significantly more slow paced and grindy than the original game - combat animations are substantially longer, the encounter rate is startlingly high (and annoyingly still based on an invisible roll), and the level cap is raised from 30 to 100.  Random enemies and bosses alike are made much harder to compensate for this, meaning you'll have to stop and grind quite a bit more to stand a chance in new areas, which can easily take hours on end.  All of this ultimately serves to just slow the game down and ruin the original's well-thought-out pacing, substantially hampering the experience.  Even moreso if you should happen to die in battle, as the ability to save anywhere has inexplicably been removed in favor of using town-based save points.

Some attempts at depth were added to the combat system as well.  Characters now have more options in combat, including some Phantasy Star IV-styled multi-techs that can be activated with certain items and spells for extra damage and added effects like paralyzing enemies.  Other weapon options are added, generally doing less damage per hit but hitting multiple times (such as Alis' daggers and Odin's pistols) or hitting all enemies on the field for reduced damage (Odin's machine guns and Lutz's slashers).  One can also find and equip various Crystals that give benefits like regenerating a small amount of HP each turn or adding elemental-based damage to one's normal attacks, and the addition of full-party healing spells is a welcome one.  However, it feels like they should have gone just a touch further with this idea - Alis's spells still become largely antiquated by the end of the game, and in a remake where enemies can now have hundreds of HP apiece, having some stronger spells to deal with them quickly would be a welcome change; sadly, most still do flat damage and the party stops learning new ones at roughly level forty, all but forcing the player to rely on the new, costly multi-techs and tedious grinding in order to survive.

What it all boils down to is that Phantasy Star Generation 1, like many other remakes in the Sega Ages line, is an attempt at adding new flair to the game that is hampered by its low budget and half-hearted attempt at introducing new elements to the game, feeling poorly planned at the best of times.  While it's certainly not a terrible attempt at remaking Phantasy Star, it is inferior to its predecessor in many respects.  Generation 1 may prove an interesting curiosity for die-hard Phantasy Star fans, but more casual RPG players should stick to the original game, as it's a far more satisfying experience overall.