Fallout 2 is the followup to the highly acclaimed 1997 PC classic, addressing some of the first game's shortcomings and bringing a massive amount of new content to the table.  But does Fallout 2 prove to be just as much of a successful role-playing experience, or is this the archetypal sequel that tries to do too much too quickly? 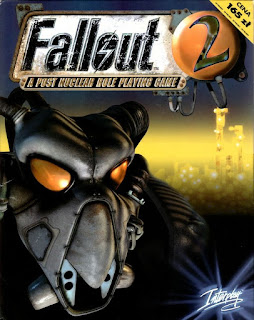 Released one year to the day after the first Fallout game, Fallout 2 was an archetypal sequel in many respects.  Still set on the west coast of a post-apocalyptic United States, it retained many of the familiar elements of its predecessor - mutated animals, random encounters, and numerous landmarks of the setting, as well as the same engine.  However, there was significantly more to see this time - the number of visitable locations on the map had nearly tripled compared to the original game's, and the amount of NPCs, quests and character dialog in the game had expanded nearly tenfold.  Indeed, almost every location the player can visit, rather than having one overarching quest and a handful of smaller ones, now has at least a half-dozen quests to complete, and not all are as easily broken into "good or evil" choices as in the first game.  One prime example of this is New Reno, where the player can ally with any of the four major crime families in the city (or none at all).  Others are more morally ambigious, such as helping Vault City force out the ghouls running a damaged and dangerous power plant in nearby Gecko, or repairing the plant and letting them maintain their independence.

Some other common complaints from the first game were addressed as well.  Recruitable NPCs now had customizable AI, with the player able to specify conditions for when to heal themselves and what types of weapons and tactics to use in a fight.  They could even now be equipped with different types of weapons and armor (up to and including power armor), making them viable even into the late stages of the game.  Weapon types are now more balanced, with Big Guns now being a viable (though still costly) choice and even Small Guns now having viable options in the later stages of the game.  Advanced in CGI also ensured that the few animated cutscenes in the game were now of much higher quality, with much less "plasticy" characters and environments and much smoother animation.  Some skills were given more of a practical use, as well - the formerly pointless Outdoorsman skill now aids with avoiding random encounters (allowing the player to skip them if they make a successful roll) and helps with finding rare Special Encounters that grant rare and powerful items.  Another example is the Skilled trait, rather than a fairly pointless (and minimal) boost to all skills, it now grants five extra skill points per level, and the longer wait between Perks is significantly less devastating for reasons detailed below.

Fallout 2 has more of a clearly defined progression to its story, with the player all but forced to go from one story-relevant area to the next in a linear fashion, lest they try to stray from it and encounter enemies much higher than their current level (and usually die).  Indeed, incremental equipment upgrades from town to town are all but necessary to survive the trip to the next for much of the first half of the game, and even then, an unlucky random encounter can put a character with a pistol in a matchup with enemies touting automatic shotguns, resulting in a game over.  As in the first game, frequent quicksaves and reloads are an integral part of the experience.

Despite this focus on balance in the early stages, the game puts much thought into higher-level play as well.  No longer is there a hard level cap at 24; instead, the player can theoretically gain as many levels as they want (up to the game's hardcoded time limit, at least) and the skill system has been tweaked to match.  The maximum for all skills is 300% now (up from 200), and at certain milestones, the cost increases - raising one point beyond 100% now costs two skill points, beyond 130% costs three, 150% costs four and so forth.  Powerful perks like Better Criticals, Slayer and Sniper now have substantially higher requirements as well.  Players can still become massively powerful, but these changes ensure that this remains an option best kept for the end of the game, and does not allow them to quickly max out their weapon skills and breeze through encounters as in the original Fallout.

One change to the game that remains universally controversial, however, is its overall mood.  While the original Fallout had an overall dark tone with a few tongue-in-cheek elements reminiscent of a comic book plot, Fallout 2 very much plays up the humor aspect of the franchise.  Frequent pop culture references creep into the dialog and the game as a whole, running the gamut from video game references to movie lines to parodies of celebrities like Mike Tyson, Bruce Lee and Tom Cruise.  Not to say that the game has no real atmosphere or interesting themes - it definitely does in its stronger moments - but elements like these mostly serve to make Fallout 2 a much sillier experience than the original game, particularly when it starts to break the fourth wall (such as providing the player with a magic 8-ball that provides in-game clues, or the game over screen mocking the player for not saving frequently enough).  It's an enormously fun game to experience and explore, but there are frequent instances where one gets the impression that Black Isle wasn't taking the experience all that seriously.

In the end, Fallout 2 is a standard but largely successful sequel, taking what made the original game great - its open-ended storytelling and dense design - and providing a lot more of it.  Some may find the humor and frequent pop culture references distracting, but for those who can roll with the punches, deal with some occasionally frustrating challenge, and laugh at the game in spite of itself, Fallout 2 is a lengthy and highly replayable quest that will keep you engrossed for many, many playthroughs.